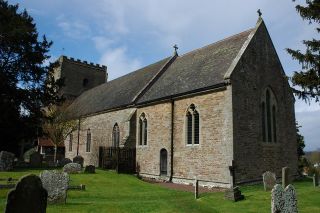 Cradley, St James the Great Church
It seems likely that there was a church at Cradley at the time of the Domesday Book; we can't be certain, for the Domesday record speaks of a priest, but does not specifically mention a church. Be that as it may, it seems clear that there was a place of worship here in the Saxon period, for incorporated into the north wall of the tower is a Saxon stone which may have served as a 'becun', or marker to designate a gathering place for worship by Saxon missionary priests.

The carved south doorway is clearly Norman in style, with incised chevrons so typical of the Norman period. The tower was rebuilt in the 14th and 15th century, but the lower parts are clearly much earlier. The tower arch leading to the nave is likely to be 12th century in date.

One intriguing feature is the door at the south corner of the tower; the doorway arch appears to have been built from two halves of a medieval octagonal font.

The font is late 18th century - it itself a bit of a rarity, for very few parish churches boast Georgian fonts. This one was built in 1771 and bears the name of its benefactor, Rev Thomas Bisse, who was one of the founders of the famous Three Choirs Festival. Near the tower arch stands a medieval parish chest of oak bound with iron. Within the interior are a number of 17th and 18th-century memorials to local families.

One fascinating memorial relates an 18th-century family squabble; the memorial to Richard Chambers in the nave states that if his son, Richard, kept a pack of beagles or hounds he would be disinherited in favour of his sister Margaret. There is no mention if the younger Richard heeded the warning and curbed his liking for dogs!

The churchyard is entered through a lovely restored 16th century timber-framed lych gate. Much older is the yew tree in the churchyard, which may date to the 13th century.

The parish register dates to 1560.

More self catering near Cradley, St James the Great Church >>