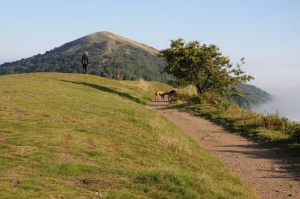 The name "Malvern" is derived from the Celtic term for "bare hill", which tells you something about the geology of the Malvern Hills. The hills, which are nine miles in length, form a striking hunchback landmark rising above the fairly flat Malvern Plain.

It has been claimed that you can see 15 counties from the summit of Worcestershire Beacon (1395 feet), and though that claim may be the subject of spirited debate, the views are indeed superb, and the walk up is a very enjoyable one. The hills are criss-crossed with walking paths, and the open nature of the country provides for a good outing.

The Hills are notable for several prehistoric sites of interest, including Herefordshire Beacon, on whose slopes is a very large enclosure encompassing 44 acres. This "British Camp", which is estimated to have been large enough to hold 20,000 people, is rumoured to be the place where the Celtic leader Caratacus (Caradoc) was captured by the Romans.

Another association with the Malvern Hills is literary; it was here that William Langland is said to have composed his "Vision of Piers Plowman", one of the earliest literary works in the English language.

Little Malvern: an attractive village that boasts the remains of a fine priory church.

The Malvern Hills Trust operates 20 car parks in the area, with money collected going towards nature conservation and management of the Hills.

photo is © Philip Halling, republished with gratitude under a Creative Commons license

More self catering near Malvern Hills