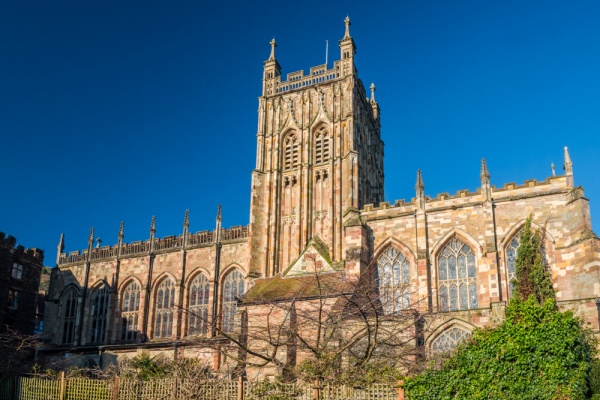 Great Malvern Priory was a Benedictine monastery begun around 1075. The 11th-century monastic church has survived as the parish church for the town of Great Malvern. The church is known for its exceptional display of 15th-century stained glass, and holds the largest collection of medieval wall and floor tiles in England. Other highlights include a superb set of 15th and 16th-century misericords.

Very little is known about the pre-Norman history of Malvern Priory. The find of an ancient carved head suggests that the site was used for worship long before the coming of the Normans. Edward the Confessor endowed a monastic settlement nestled against the eastern slope of the Malvern Hills, perhaps on the site of a hermitage founded by St Werstan, a monk from Deerhurst in Gloucestershire, who fled when Deerhurst was attacked by Norse raiders.

During Edward the Confessor's reign St Wulfstan, the Bishop of Worcester, made a hermit named Aldwyn the first abbot of a new monastic settlement at Malvern Chase, then a remote area. The monastery was a daughter house of Westminster Abbey, and housed 30 monks. Aldwyn was followed by Walcher, whose worn coffin lid can be seen in St Anne's Chapel. 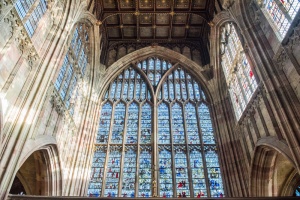 The 11th century church was rebuilt several times during the medieval period, most notable during the 15th century, when the superb stained glass, misericords, and tiles were installed. The striking central tower was built in the late 15th century by the same team of masons responsible for Gloucester Cathedral.

When Henry VIII dissolved Malvern Priory the residents of the town purchased the priory church to replace their own parish church, then in a state of decay. The Priory itself needed major restoration work in 1812, 1816, 1834, and again in 1841. A final Victorian restoration took place in 1860 under the direction of Sir George Gilbert Scott, who rebuilt the nave roof in the style of its medieval predecessor.

Great Malvern Priory is famous for its superb collection of medieval glass. One of the best examples is the north transept window, depicting the Coronation of Mary. The window was given by Henry VII in 1501; an ironic gift when you consider that it was Henry's son who dissolved the Priory a few decades later. An earlier window was given by Richard, Duke of Gloucester, later Richard III. 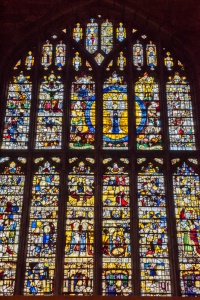 The Coronation of Mary
window, given by Henry VII

Aside from the coffin lid of Prior Walcher, one of the most intriguing historic monuments is the chancel memorial to John Knotsford, or Knottesford (d. 1589). Knotsford was one of the men responsible for dissolving the monastery under Henry VIII, so it seems a curious twist that his own ornate memorial now stands near the high altar of the former monastic church. The memorial stands on the south side of the chancel, with alabaster effigies of Knotsford and his wife Jane, with a figure of their daughter Jane to one side.

One of the glories of the priory church is its collection of 22 15th-century carved misericords in the chancel. In addition to the medieval 'mercy seats' there are an additional dozen 19th century carved seats. The medieval misericords depict the Labours of the Months, providing a wonderful glimpse into traditional 15th-century life. Activities depicted include a man sowing seeds, a man harvesting grain, and a swineherd gathering acorns.

Other seats depict grotesque beasts and imaginary creatures. The carving style is similar to misericords at Ripple and Worcester Cathedral, so it is possible that the same woodworker was responsible for all 3 sets of misericords.

Set around the ambulatory are a wonderful collection of medieval wall and floor tiles, made between 1453-1458. There are over 1000 tiles, representing the largest single source in any English church. Most are simple geometric designs, but there are also quite a few with heraldic symbols. One is known as the Friends' Tile. It is inscribed with a verse reminding the reader of their mortality; 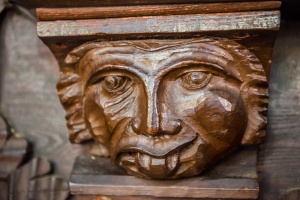 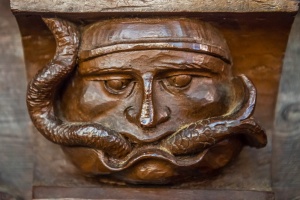 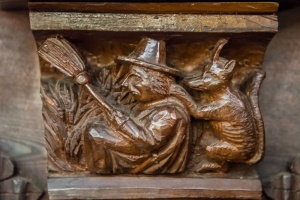 A witch with a broomstick 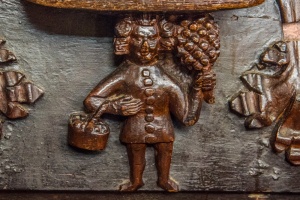 September, from the Labours of the Months

Great Malvern Priory is located on Church Street, just off the A449 road from Little Malvern. There is no parking beside the church, but several pair parking areas nearby. The church is usually open daylight hours. Malvern Museum is located on the edge of the churchyard, housed in the old monastic gatehouse. I absolutely loved visiting the church; though much of the interior is a result of Victorian restoration, so much of the medieval church remains. The stained glass is utterly superb, and the collection of tiles is better than any I've seen in an English church. For me, the real highlight was the misericords. The carving is a delight, and the depiction of daily life in the Labours of the Months gives a compelling glimpse into the medieval world. 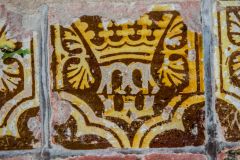 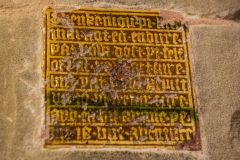 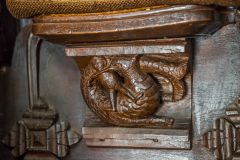 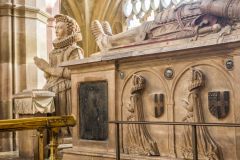 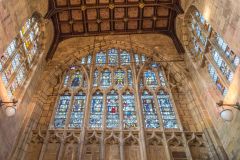