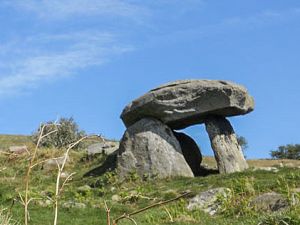 Maen y Bardd (Stone of the Bard)
Maen y Bardd is a Neolithic burial chamber composed of a projecting capstone supported by four upright stones. There are several solitary standing stones in nearby.
History
The 'Bard's Stone' site is thought to be all that remains of a burial chamber built around 3500 BC in a remote area overlooking the Conwy Valley. Tradition suggests that the dolmen was originally covered by a large cairn of small stones, but only scattered traces of stones remain.

The burial chamber consists of a large, flat, capstone supported on four standing stones forming a rectangular inner chamber. The chamber is about 1.2 metres high (roughly 4 feet) and the capstone projects beyond the upright stones to form an entrance, or portal. For that reason this type of burial chamber is often called a portal dolmen.

The chamber stands near an ancient pathway, and in a landscape full of prehistoric remains including cairns and standing stones. The pathway was later used by the Romans to link their forts at Caerhun and Caernarfon.

The chamber is sometimes called Cwrt-y-Filiast (Kennel of the Greyhound); a reference to an ancient legend that says that a giant's sheepdog took shelter under the dolmen and his master threw a spear across the valley at the hound.

Getting There
There is a car park at Bwlch y Ddeufaen. From there retrace your steps down the lane for .75 mile to a right-hand bend. Go over a stile and join the route of the old Roman road in an easterly direction. Keep straight on for 1/2 mile, past Cae Coch homestead and a large standing stone. Maen y Bardd will come into view to the left of the path.

Nearest Accommodation to Maen y Bardd (Stone of the Bard):

More self catering near Maen y Bardd (Stone of the Bard) >>

More Hotels near Maen y Bardd (Stone of the Bard) >>