HERITAGE HIGHLIGHTS:   Medieval church built into one corner of the fort 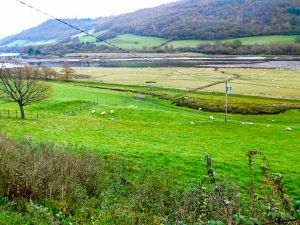 Caerhun Roman Fort (Canovium)
Canovium is a 1st century fort built to guard a strategic crossing of the River Conwy. The first fort was built of earthwork banks and ditches, later rebuilt in stone. The fort was abandoned around AD 200 and then reoccupied until the late 4th century.

Around 75 AD the Romans built a fort to defend the road leading from Chester to their military outposts on the Welsh frontier. The Caerhun site controlled a crossing of the River Conwy, near the modern village of Tal y Cafn. The site was chosen with care, for not only could it be supplied by road, but Caerhun stood at the highest tidal point on the River Conwy, allowing sea-going vessels to sail right up to the fort. Remains of a dock have been found beside the river, near a bathhouse built to serve the garrison.

The fort was built to a traditional square design, with sides about 410 feet enclosing an area of 3.75 acres. The fort was designed to hold a cohort of foot soldiers, nominally 500 men strong. Along the road leading to the fort a vicus, or civilian settlement, grew up.

The fort defences were originally earthworks topped by a timber palisade, with timber buildings inside the outer defences. In the early 2nd century the timber buildings were rebuilt in stone, and a stone wall measuring 6 feet wide at the base was erected between the earlier earthen rampart and ditch. The gateways were rebuilt in stone at the same time. The main gate seems to have been in the east wall, and was a double opening gate flanked by guardrooms. 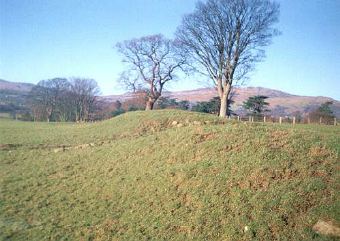 Within the fort were traditional Roman buildings including granaries, barracks blocks, and an unusual large commandant's house and headquarters building.

Around 196 AD the well was filled in, suggesting that the fort was temporarily deserted. The vicus seems to have been only occasionally used after this, falling completely out of use in the 4th century.

The fort itself was reoccupied in the early 3rd century, and a stone cookhouse built around 235 AD. Finds of pottery and coins suggest continuous occupation until the late 4th century.

The first known excavation of the Caerhun site took place in 1650 by the antiquarian Samuel Lee, who reported finding a hypocaust and Roman tiles imprinted with the inscription LEG XX V. Excavations in the 1920s revealed a wealth of coins and pottery, plus fascinating objects from everyday life, including a game with counters, and a tile imprinted with the outline of a child's foot. Objects found at Caerhun are on display at the Llandudno Museum.

After the departure of the Romans the site seems to have been used by the Welsh king Rhun Hir ap Maelgwn Gwynedd. Rhun Hir's name may form the basis of the modern name 'Caerhun', from the Welsh 'Caer Rhun', or Rhun's Fort.

Hundreds of years later a church was built in the north east corner of the fort. Though the building we see today dates from the 13th century it seems likely there was a much earlier church on the same site.

Visitors can park at the church, which seems to be open only sporadically. The fort's earthwork defences are easily visible in the field surrounding the churchyard, but unfortunately they are on private land, so you can't get any closer. Since the church is actually within the fort this shouldn't actually present any difficulty though! There is an information panel and a plan to help you understand what you are seeing. The fort is within the grounds of Caer Rhun Hall, a 19th century country house.