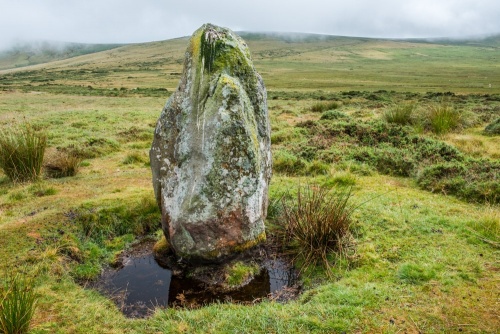 A standing stone 5 minutes from the layby.
Waun Mawn Standing Stones consist of four stones, part of what may have been a very large diameter circle. Two stones are standing, and two are prostrate. Nearby are the Troed y Rhiw standing stones.

Waun Mawn has been described as the remains of a stone row, and also as a stone circle. If it is indeed a row then a lot of stones have gone missing over the centuries! But if it is a stone circle then the remaining stones indicate a circle with a huge circumference.

Nearby is a solitary standing stone, dubbed, naturally, 'Waun Mawn Stone'. This solitary stone is by far the most impressive, measuring some 2.3 metres high. It stands to the west of the main group, but is it part of a larger complex of stones, or something else entirely?

Waun Mawn translates roughly from the Welsh for a peat moorland. 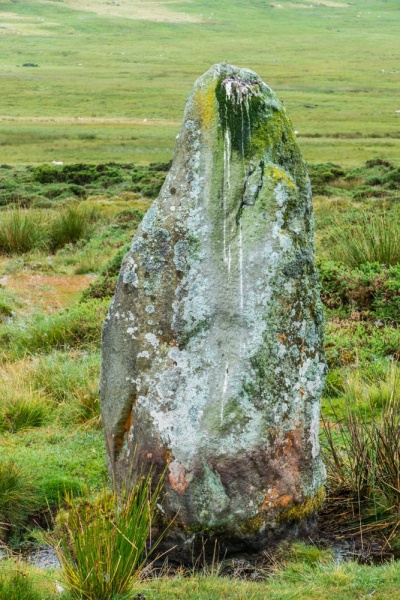 The Waun Mawn Stone from the east

For over a century it has been generally accepted by archaeologists that the bluestones of Stonehenge -- the oldest stones at the famous prehistoric monument on Salisbury Plain -- had been quarried in the Preseli Hills of Pembrokeshire.

In 2010 a team of archaeologists headed by Mike Parker Pearson began a search for the original Welsh quarry. They discovered it at Carn Goedog, with some bluestone monoliths still in place. The quarrying activity was dated to around 3300-3400 BC, which presented a problem because the bluestones were not erected at Stonehenge for another 300 years after that.

Parker Pearson's theory was that the bluestones had not been quarried specifically for Stonehenge, but to be erected locally, and over the next 7 years he and his team of archaeologists, students, and volunteers explored possible sites in the vicinity. One by one, those sites proved to have been created long after the bluestones at Carn Goedog were quarried.

The final site, the last roll of the dice for Parker Pearson and his team, was an unpromising site at Waun Mawn, 5km (3 miles) from the Carn Goedog quarry.

They began investigating Waun Mawn in 2017, and at first the results were disappointing, but then they found evidence of holes marking places where stones had originally stood. In one of those holes a broken stump of a bluestone remained, a stump that perfectly matched the profile of a bluestone at Stonehenge.

The archaeologists followed the arc of a circle created by the existing stones and the empty stone holes, and found that there had been a circle of standing stones at Waun Mawn measuring 110m in diameter; exactly the same diameter as the first bluestone circle at Stonehenge. The archaeologists estimate that this original circle was composed of 30-50 stones.

Dating the stone circle proved difficult, but Parker Pearson and his team proposed a date of 3400-3200 BC, which would make Waun Mawn amongst the oldest stone circles in Britain.

Parker Pearson's theory is that the circle stood for some 300 years before it was moved, not by sea as was previously thought, but overland, using timber sledges, to Salisbury Plain, probably as part of large scale migration, or shift in population.

When we visited in 2018, it was extremely foggy and we did not get as far as the Waun Mawn stone or the archaeological site due to the fear of getting completely lost. However, there are other, small stone circles and standing stones five minutes away from the layby.  It is still amazing to think of how this bleak, open site may have looked over 5,000 years ago when the first bluestone circle stood here!

Directions courtesy of an intrepid reader.

Access to the stones is via a moderate 15-minute uphill walk on a rough track. There is a rough layby on the B4329, immediately north of the cattle grid at the southern edge of Tafarn-y-bwlch. If you are coming from the north, don't cross the cattle grid!

Look for the layby to the right (west) of the road just before the cattle grid. If you are coming from the south, cross the cattle grid and the layby is immediately beyond it on your left. There is room for two cars. It can be wet and muddy when you leave the vehicle track, so good waterproof footwear is essential.

From the layby go through the farm gate and follow the vehicle track for about 30 metres to where it  bends to the left. Stop following the vehicle track at this point and take the rough unmade track on your right which winds its way north up the hillside. Follow this until a vague fork appears; take a left at the fork which continues in a northerly direction towards the summit of Waun Mawn. As you progress northwards towards the summit, you will pass through the area containing the stones. Scan the hillside as you advance and you will likely see the tall Waun Mawn stone. The prostrate stones are easy to spot close by.

It's also worth noting that an OS map is handy, and in anything other than good visibility, it would be difficult to find the stones without use of a map and compass.

The site is not wheelchair accessible.

More self catering near Waun Mawn >>