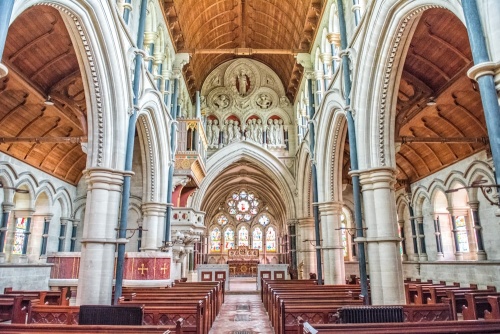 Skelton-cum-Newby Church is a stunning Victorian church built by kidnap ransom money. When 23-year-old Frederick Vyner was seized by bandits while travelling in Greece on a Grand Tour, his mother quickly gathered money for ransom, but events did not have a happy ending.

Frederick Grantham Vyner was travelling in a company of wealthy English visitors to Athens. The group decided to take a carriage trip from Athens to visit the site of the Battle of Marathon. Returning from the battlefield site the party was set upon by brigands and captured. The bandits demanded a ransom fee of one million drachmas, which then had the value of £32,000 but in today's money was probably the equivalent of over one million pounds.

In 1871 Vyner's grieving mother Lady Mary Vyner hired prominent Victorian architect William Burges, using the money meant for Frederick's ransom to create a magnificent Gothic memorial to her son in the grounds of her stately home of Newby Hall and a second church on the neighbouring Studley Royal estate where her sister and Frederick's aunt Lady Ripon resided.

Even the dedication of the church stands as a memorial to a mother's grief; officially it is the church of Christ the Consoler. 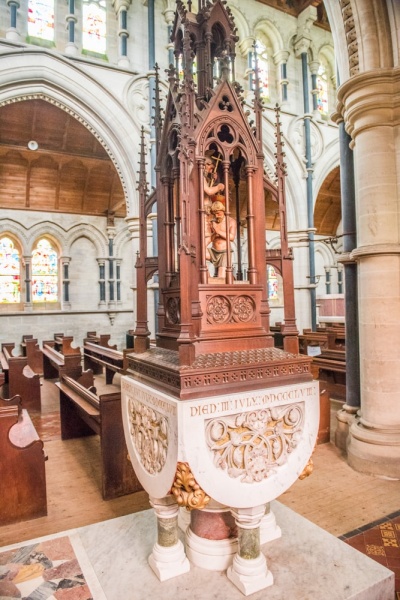 The ornate font of Tennessee marble

Burges was a natural choice as the architect; he had already designed Cardiff Castle and Castell Coch for Lord Bute, a relative of the Vyner family. Lord Ripon, Lady Mary's brother-in-law, served as co-patron. In a curious twist, he converted to Catholicism before either church was complete. Even so, he was buried in the family vault of St Mary's church at Studley Royal.

The attention to detail shows how much care Burges took in creating an ornate, even extravagant statement. Everything is built to an exacting standard, and the decoration is extraordinarily rich and ornamented in ebullient Victorian style. Even so, it is not so richly decorated as its sister church at Studley Royal. That difference in luxurious furnishing is reflected in the cost; Skelton-cum-Newby cost some £25,000 (up from an original estimate of £10,000) while St Marys at Studley Royal cost £30,000, well over the initial estimate of £15,000.

Burges used lush colour throughout but seems to have consciously made the interior progressively more colourful the closer you come to the east end. The interior is full of wonderful carving in wood, stone, and metal. The chancel is stunning, with limestone vaulting and multicoloured marble panelling. 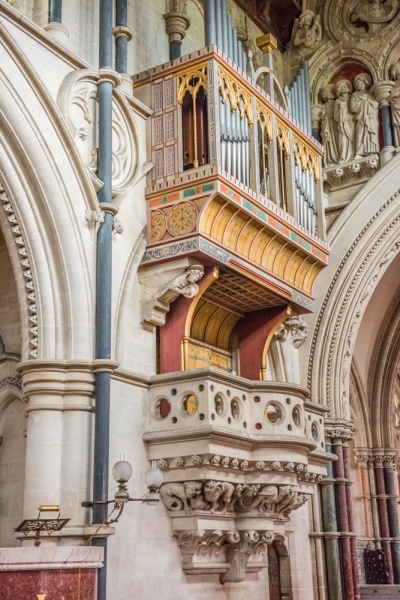 The font is made of Tennessee marble given by Lord Ripon in honour of his only daughter Mary, who died just one year old.

The style is very precisely a copy of Early English design from 1270, with just a few French influences in the decoration. Every detail, down to the door hinges and the prayer books, are elegantly Gothic and richly decorated. This is Victorian Gothic at its very, very best.

Christ the Consoler is not in regular use and is cared for by the Churches Conservation Trust. Don't visit Newby Hall without pausing to visit this amazing church, and spare a thought for the tragedy that produced it.

Follow brown tourist signs for Newby Hall, which is well signposted from all major roads in the Ripon area. As you enter the gates to the Hall you will see the church in a stand of trees to your right. A drive leads off at an angle to a small parking area just outside the churchyard. 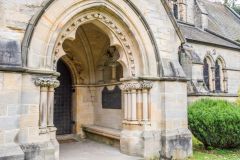 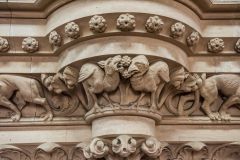 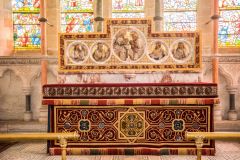 More self catering near Skelton-cum-Newby Church >>