HERITAGE HIGHLIGHTS:   Among the tallest standing stones in Britain 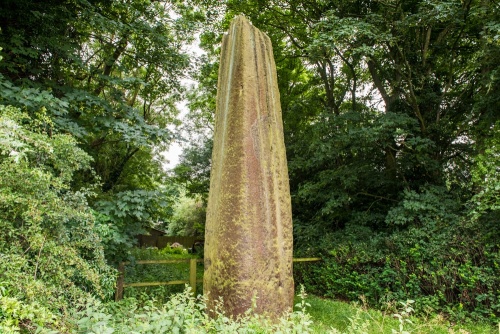 The Devil's Arrows is an arrangement of three exceptionally large standing stones just outside the North Yorkshire town of Boroughbridge. The standing stones date to the late Neolithic or early Bronze Age period and may have been part of an original alignment of five stones stretching 174m.

The stone row goes by many names, including The Three Greyhounds, The Devil’s Bolts, and The Three Sisters, but is most commonly known as the Devil's Arrows.

Why the unusual name?

A local story, first recorded in the 17th century, claimed that the Devil became angry with the inhabitants of Aldborough, just east of Boroughbridge. He hurled stones at the village from the top of How Hill, about seven miles to the west. The stones fell short of their target and landed upright in the earth, forming the Devil's Arrows. 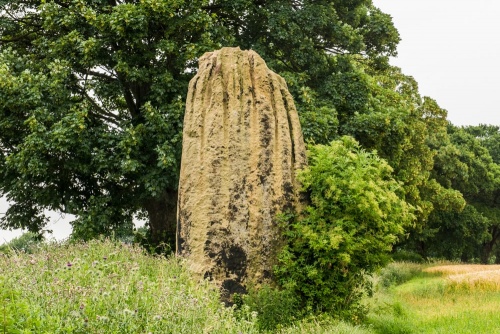 Another local bit of folklore says that if you walk 12 times around the stones in an anti-clockwise direction the Devil will appear. We didn't test this legend (for a start, field boundaries get in the way, and really, we didn't fancy summoning the Devil just to test an old legend).

The stones stand 5.5m (18ft), 6.7m (22ft), and 6.9m (22'6") high from north to south. The final stone, at 6.9m high, is taller than any of the more famous stones at Stonehenge and is the second-tallest of any standing stone in Britain after the Rudston Monolith, also in Yorkshire.

The stones are spaced irregularly. The northernmost stone (the smallest) has a rectangular base measuring 1.4m x 2.6m. Sixty metres to the south is the central stone (6.7m high). This has a base closer to square, at 1.5m x 1.2m. 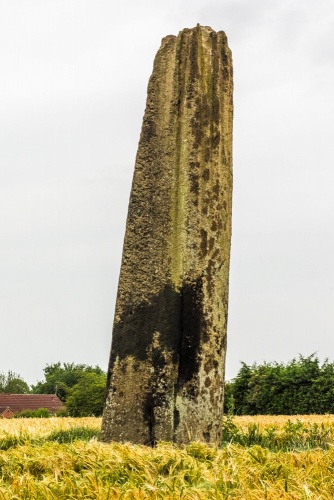 Excavations in the early 18th century revealed that the stone is set in a 1.5m hole. The stone's bottom had been flattened and the hole was packed with clay, grit, and cobbles to keep the stone upright. Before the hole was closed up the excavators put a small lead 'time capsule' in the hole; a small lead box containing William III and Queen Anne coins.

Just over 2m away is the site of a fourth stone, thought to have fallen in the 16th century and been used for the foundations of the nearby bridge across the River Tutt. The top section of the stone was erected in the grounds of Aldborough Manor. William Camden, writing around 1560, said that the stone had been pulled down by local treasure hunters hoping to find riches buried beneath it.

The southern stone (the largest at 6.9m) stands 110m south of the central stone. it was excavated in 1881 and found to stand in a hole 1.8m deep. This stone is behind a wooden property fence but you are so close that you can easily examine the stone. Just outside the wooden fence is a modern standing stone with a small blue plaque that describes the Devil's Arrows in these words: 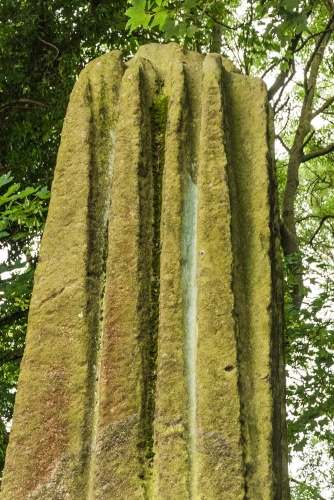 All of the stones have deep grooves in the top, making them look like the bottom edge of an arrow. The grooves are natural and were formed by weathering.

All three stones are formed of millstone grit and were brought here from Plumpton Rocks, about nine miles away. Simply bringing the stones that distance was an extraordinary feat. It would have involved large teams of people rolling the stones on timber rollers, a difficult and time-consuming process even today. Then when they had been brought to the banks of the River Ure they had to be carefully upended in prepared holes and wedged into position.

What makes the Devil's Arrows even more unusual is that the stone alignment is set up in a low lying area beside the River Ure. It is one of the very few stone alignments in a lowland setting in Britain. The obvious question is then, why were the stones erected?

Various theories have been put forward, including one that says the stones were erected by the Romans to commemorate a military victory. That theory is based on the presence of a Roman settlement at nearby Aldborough. 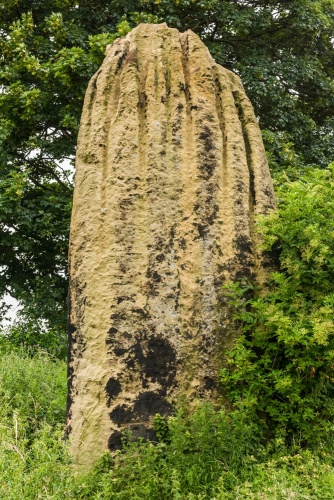 They may have been part of a larger ceremonial landscape, or commemorated a local chieftain. A much more likely answer is that the stones were arranged according to an astronomical alignment with the summer moonrise.

The Devil's Arrows may form part of a vast arrangement of stones that run on a roughly north-south axis through Yorkshire, loosely following the A1 trunk road, which had its origins as an ancient trackway. The site may have been adopted as a ceremonial centre by the Brigantes tribe, whose capital was at nearby Aldborough. 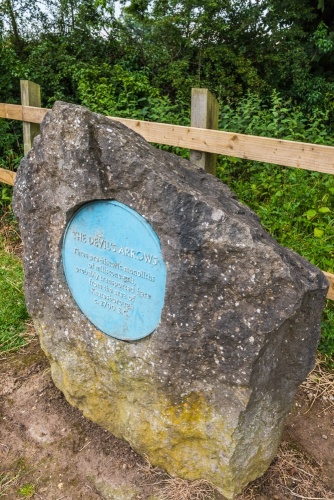 The plaque outside the
southernmost stone enclosure

This is the tricky bit. There are no signs for the Devil's Arrows, no parking area, and no visitor facilities of any kind. It is no wonder that the stones are so little known.

The southernmost stone (the largest) stands on the west side of Roecliffe Lane just before the A168 roundabout. The other two stones are in the farm field on the east side of the lane. You can walk around the edge of the field, but please don't walk directly across the fields, as that can damage crops.

You can avoid parking problems (as in, there isn't a parking area) by walking from the centre of Boroughbridge. From the southern end of High street turn right (west) onto st Helena. At the end of the road turn left onto Horsefair then right onto Roecliffe Lane. You will pass the aptly named Arrows Terrace on your right, then the lane leading to the marina and timber yard.

The southernmost standing stone is ahead on your left, just before you reach the roundabout. The other two stones are on the western edge of the farm field on your right.

More self catering near Devil's Arrows

Self Catering near Boroughbridge