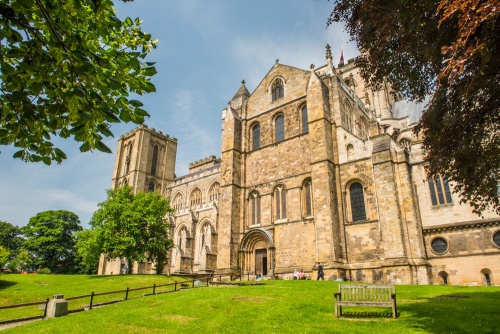 I came around a corner in the road, not thinking of anything other than reaching my destination, miles to the north, in the Yorkshire Dales. Rising up ahead of me like an unexpected guest who jumps out from behind a door and shouts 'surprise!' was a gorgeous church, practically towering over me.

I craned my neck as I drove past, and caught a glimpse of a beautifully carved west front with statues decorating small niches above a wide door. My destination forgotten, I pulled into the nearest side street, grabbed my camera, and hurried back to explore this unknown treasure.

That was my first glimpse of Ripon Cathedral. I didn't even realise it was a cathedral, nor had I any notion of its historical significance, I just knew that it was an amazingly beautiful historic building and I was drawn to it like a honey bee to a flower.

Of course, as I explored the cathedral interior I learned not only where I was (always a good notion to figure out) but I also found out more about the history of this wonderful building.

After I returned home, my camera full to bursting with images, I began to read about the cathedral, its ancient foundation, and its architectural and historical importance, and it struck me that I was not alone in ignorance of Ripon Cathedral. It must be the least known and least appreciated of England's medieval cathedrals, but it is truly a national treasure, a wonderful building full of fascinating historical interest. 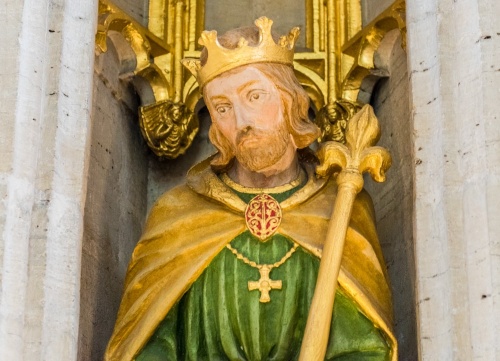 Statue of King Aethelbert on the choir screen

The foundation of Ripon Cathedral is a mix of myth and history, and it is sometimes hard to separate the two. A minster church was founded here by Celtic monks from Melrose Abbey around AD 660 AD on land granted by Alchfrith, a sub-king of Deira.

Alchfrith must have changed his mind about the style of worship he wanted to encourage, for he granted the monastery to St Wilfrid a short time later. The monks from Melrose packed up and left, leaving the field to Wilfrid.

Wilfrid formed a Benedictine monastery on the site and built a large stone church. He hired craftsmen from Europe to build the church, starting around AD 672. When Wilfrid died in AD 709 his body was brought to Ripon for burial. The crypt of Wilfrid's church still survives and can be visited; it is quite an experience, too.

Descending into the dim depths of the earth it feels like you are going back through time and will start to hear monks chanting at any moment. The crypt was built in imitation of Christ's tomb, and is very simple, with whitewashed walls with small niches for candles and a simple altar table.

The large niche on the east wall may have been made to hold the relics of saints brought back by Wilfrid from Rome. Now it houses a 14th-century alabaster carving depicting the resurrection of Christ.

The carving was part of a hidden stash found beneath the Dean's stall in the choir during Victorian restoration work. It was probably hidden to protect it from damage during the Reformation when many works of religious art were destroyed.

St Cuthbert served for a time as a guest master at Ripon and is said to have entertained an angel, not realising who his guest was. 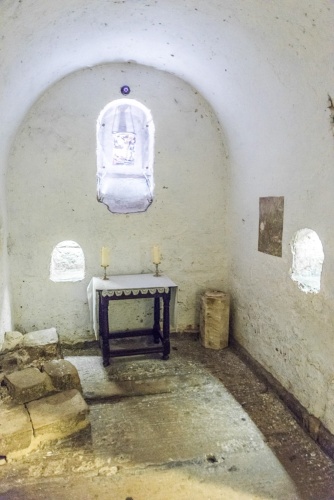 In AD 875 the monastery was sacked by raiding Danes. It was rebuilt but again destroyed in AD 948. Sometime after AD 978, it was rebuilt once more, by Bishop Oswald, who intended it to serve secular priests. It had 6 prebends (attached to specific local churches) and was under the patronage of the Archbishop of York.

The monastery existed in one form or another until the Reformation when things get a little confusing. Since Ripon was serving as both a parish church and a monastic college, it lasted longer than most monastic houses, finally falling foul of Henry VIII in 1546 when the Dissolution of the Chantries was enacted. But because it was also a parish church it was not destroyed as other monasteries had been.

In 1604 James I re-founded Ripon. but it was dissolved under Cromwell's Commonwealth, only to re-founded again under Charles II in 1660. It served as a parish church until Ripon Diocese was formed in 1836 when the church was raised to the status of a cathedral.

The minster church was heavily restored when it was made a cathedral, so at Ripon you really have three churches in one; the ancient monastery of St Wilfrid, the Victorian improvements and restoration, and making up the bulk of the building, the medieval college. 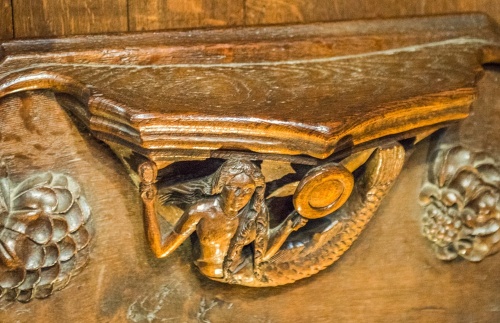 Medieval misericord of a mermaid

I've mentioned the Saxon crypt, but there are numerous other Saxon remains in the church, including a late 9th-century crosshead, an 8th-century grave marker, a 7th-century altar pillar and cross base in the crypt, late 8th-century string courses in a corner of the north transept, and a 7th century carved capital in the Chapel of the Resurrection.

The chapter house is probably 13th century, though it could perhaps be Norman. Most of the remainder of the church is in glorious early Gothic style from the period 1154-1255. There is an exquisite 14th-century sedilia, a 14th-century library above the chapter house, and a 15th-century pulpit. The library was originally a chapel but now houses the Cathedral's Treasury.

Among the Treasury items on display is The Ripon Jewel, a Saxon roundel discovered near the cathedral in 1976. This lovely circular ornament is made of gold inlaid with garnet and amber. Among the memorials inside the church is a table tomb to Sir Thomas Markenfield (d. 1398) with a beautifully carved effigy, somewhat marred by Reformation iconoclasts. 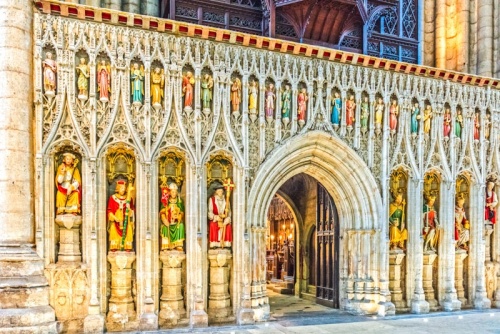 However, the real treasure in my eyes is the choir screen, with eight carved and painted kings in canopied niches flanking a central doorway into the choir, with a further 24 statues in niches above the doorway arch.

The screen is a delight, beautifully carved and wonderfully ornate. Sir George Gilbert Scott, who undertook much of the Victorian restoration, thought the screen dated to around 1494, but there is a screen mentioned in a document from 1408 so either there was an earlier screen or Scott was out by at least a century!

The screen is fully 8 feet thick, with a door inside the passage to the rood loft, and another door down into the Saxon crypt. Unfortunately, though the screen is authentic medieval work, the statues are Victorian and represent kings, bishops, and saints who played a part in the history of the cathedral. Beyond the screen is the choir, famous for its medieval carved seats, or misericords.

One of these carvings shows a gryphon pursuing a rabbit, and is said to have inspired Lewis Carroll's Alice in Wonderland story. Since Carroll's father was a canon at Ripon from 1852-1868 this story has at least the possibility of truth in it.

As you can tell, I loved Ripon Cathedral. It deserves more public notoriety, if that's the right word, as the wonderful historic building that it is.

After visiting the cathedral walk down Kirkgate towards the market square and look back at the view of the cathedral's west front framed by the shops on either side of the road. This is the same view sketched by artist JMW Turner on his tour of Yorkshire in 1797. It is wonderful to see how much of the view remains unchanged in the 2 centuries since Turner was here. Turner's original sketchbook is held at Tate Britain in London. 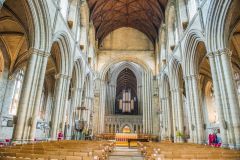 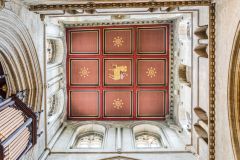 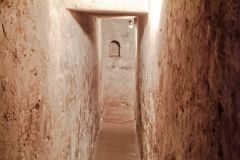 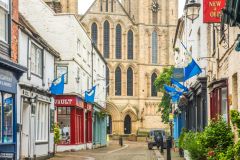 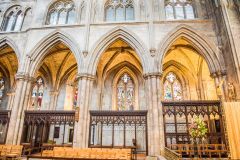 More self catering near Ripon Cathedral