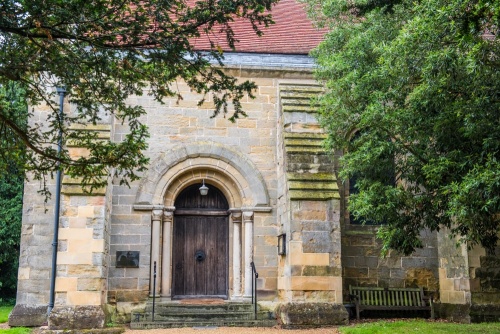 Roecliffe parish church is a neo-Norman structure built in 1843 by York architect RH Sharp, whose most famous work was at the Yorkshire Museum in York. The church was built on land given by Andrew Lawson, lord of Aldborough Manor, and the churchyard is full of memorials to members of the Lawson family.

Some of the stone for the church came from the old Roman quarry at Aldborough, which stood within the grounds of the Lawson estate. The building is very simple; it consists of a rectangular nave, chancel, vestry, and west bell turret. There is no porch; entry is by way of a round-headed south door directly into the nave. The design is thought to have been inspired by an Oxford college.

The plain interior features a barrel-vaulted roof of limestone ashlar. This is probably the outstanding architectural feature of the building and is quite unusual in a church of this date. Unusually, the vaulting springs directly from the side walls.

The load of the stone roof proved too great for the walls, and after 30 years they started to buckle. This necessitated the addition of the bulky stone buttresses you can see today towards the east end of the church exterior.

The oak pews are arranged around the walls in a style more usually seen in college chapels. There is a Jacobean pulpit, brought here from Holy Trinity Church in Hull. Isaac Milner, the influential campaigner to abolish slavery, is known to have preached from the pulpit before it came here. The vestry door is 15th century and was brought here from York Minster after the Minster suffered a fire in 1829.

Above and beside the vestry door are 16th/17th-century wooden panelling carved with Biblical scenes. Among the scenes depicted are the battle between David and Goliath, the Hebrews' Flight into Egypt, and Salome's dance. In the vestry itself is a Victorian chimneypiece with a cast-iron grate. The chimney breast is carved with human faces, some grimacing with exaggerated features.

The chancel floor and steps are made of marble from York Minster, brought here at the same time as the vestry door. The chancel walls are lined with 17th-century linenfold panelling from Nun Monkton Priory.

The vividly coloured east window was made by the Barnett company of York and depicts the Virgin and Child. It is a copy of a 15th-century Italian fresco by the Italian artist Pinturicchio. The altar itself dates to the 17th century and is made of solid oak.

Despite the Victorian fabric, there are some interesting examples of medieval woodwork, but no one is quite sure where they came from or why they ended up here.

The drum font is Victorian and is modelled after a Saxon font at Charlton-on-Otmoor in Oxfordshire.

St Mary's is no longer used for regular worship and is cared for by the Churches Conservation Trust. The church is often kept locked but there is a keyholder in the neighbouring house - though on our last visit there was no one at home so we were unable to get a church key. 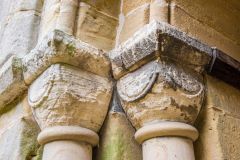 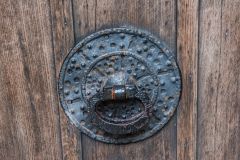 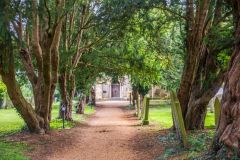