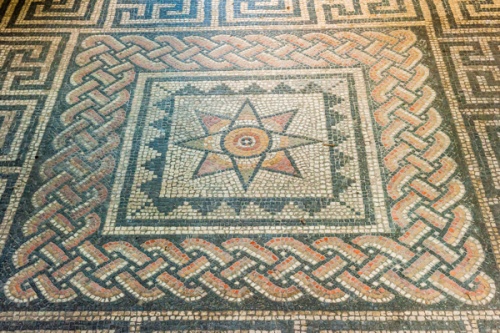 The Yorkshire village of Aldborough began as the 1st-century Roman city of Isurium Brigantum, the capital of the Brigantes tribe. The Brigantes were the largest British tribe at the time of the Roman invasion. A Victorian arboretum occupies a part of the Roman settlement, and you can see two exceptional Roman mosaics still in their original position.

One of the mosaics depicts a lion. The mosaic dates to the 2nd century and was discovered in 1832 when the landlord of the Aldburgh Arms pub (now the Black Swan Inn) tried to bury a calf at the bottom of his garden. The central panel is missing quite a few tesserae, possibly the result of Victorian treasure-hunters stealing pieces as souvenirs.

The other mosaic shows an eight-pointed star. The central panel is surrounded by interlace and geometric patterns.

You can clearly see a section of the Roman town walls and foundations of civic buildings. There is a small museum on site containing artefacts found during excavation. 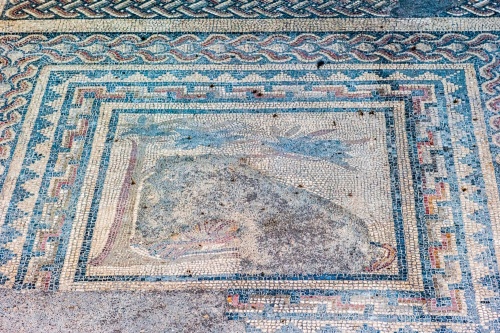 The city of Isurium was popular with the most powerful officials of Roman York, and many of the consuls and governors of York had their villas at Aldborough. Aldborough was one of the most northerly urban areas in the Roman empire and wealthy residents occupied large houses on extensive hillside terraces. The town was named a 'civitas', an important civic administrative centre. It was not a military centre like York but a civilian town enclosed within a ditch and stone walls.

The town was founded around AD 74 close to the point where the major Roman road of Dere Street crossed the River Ure.

We do not know what happened at Aldborough after the Romans left Britain in the 5th century. One medieval writer suggests that Aldborough was sacked by the Vikings in AD 870.

After the Norman conquest of England in 1066, the Ure river crossing was moved upriver, leaving Isurium to a new settlement that became Boroughbridge. With the new town at Boroughbridge, the old settlement became known as Aldborough, probably meaning 'old borough'.

Over the centuries Boroughbridge grew to become a busy town while Aldborough dwindled to become a quiet village and its Roman past was largely forgotten. It was only in the 19th century that the significance of the Roman remains at Aldborough was recognised.

Since that time there have been several excavations. Most recently a geophysical survey discovered the location of a Roman amphitheatre just outside the town walls.

The church at Aldborough has a Roman carving of the god Mercury built into the stone of the north aisle. 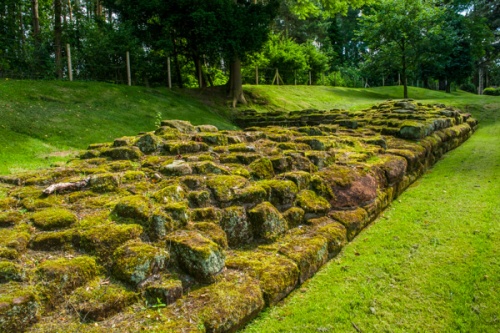 A section of Roman wall

In 1863 Andrew Lawson, owner of Aldborough House, opened a museum in the grounds of his house to exhibit artefacts from the site. In 1948 Lady Lawson-Tancred gave the museum and part of the grounds to the nation. It is probably one of the oldest public museums begun by a private collector.

One of the museum highlights is The Helicon Mosaic, a scene depicting Mount Helicon, the seat of the Nine Muses. The mosaic was originally laid on the floor of a dining room in a large townhouse. Another fascinating item is a key in the shape of a finger ring. Such 'ring keys' were used to lock trinket boxes or document strongboxes.

Aldborough is a fascinating site, part excavated Roman finds and part romantic Victorian garden created around the Roman city. The best-preserved part of the site is a pair of very well-preserved Roman mosaics, protected under modern buildings. You can peer through the open doorway of the buildings and get a very clear view of the mosaic floors from only a few feet away - much closer than at many other major Roman sites.

The remainder of the site is a mix of short sections of walls with associated earthwork banks, and carefully arranged Victorian rows and groves of trees, arranged to create a shaded garden space from the Roman ruins. The small museum at the entrance has an extremely good display of finds from the site and the surrounding area.

The Friends of Roman Aldborough (FORA) organise regular guided tours of the museum site. The tours are free but entry to the site itself is not.

The site is well signposted but there is no dedicated parking area. we were able to find a parking space on Front Street. 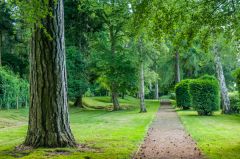 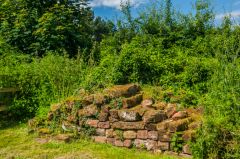 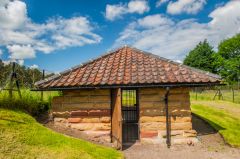 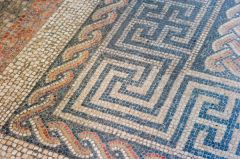 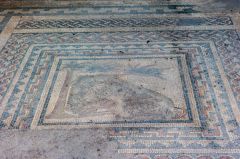 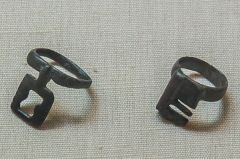