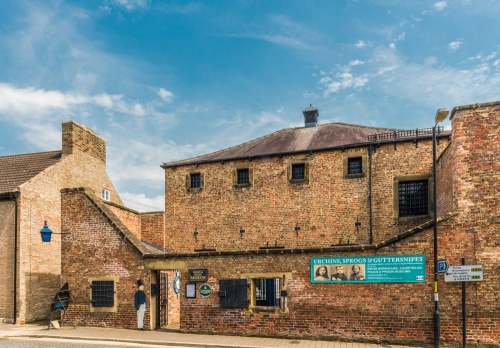 The Ripon Police and Prison Museum is housed in an authentic Victorian prison a short stroll from Ripon Cathedral. Visitors can step into a prison cell, try on prisoner uniforms, and experience the hard labour of 'turning the crank' or climbing a treadmill. The grim life of a 19th-century prison comes to life in this fascinating museum, which also houses a museum tracing the history of policing in Yorkshire.

The Prison and Police Museum is set within the walls of Ripon's historic Liberty Prison. In this case, 'Liberty' has nothing to do with prisoner freedom; it refers to the Liberty of Ripon, or Riponshire, a district ruled directly by the Archbishop of York. 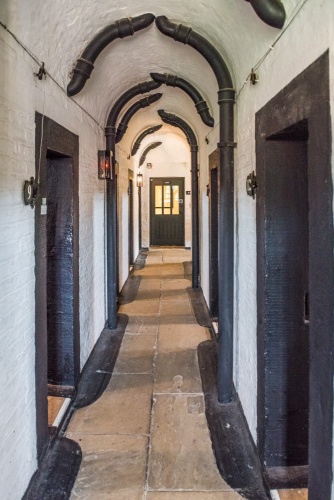 The Liberty Prison was built in 1816 as an extension to the neighbouring House of Correction. The prison had four ground-floor workrooms and a chapel, with nine cells on the first floor. A women's wing was later added, with its own exercise yard. The women's wing had three cells above a prison laundry and a workroom.

In the 1820s a treadwheel was installed in the exercise yard. This was removed in the 1860s and replaced with five more work cells. A sick ward, photography room, and dark cell wee built at this time. The dark cell was a windowless cell for solitary confinement.

As you step through the museum gates you enter the prison yard, where an old pillory and whipping post stand. Hanging from the wall is a set of jougs, a hinged and lockable iron collar often found attached to a church wall. Jougs were commonly used as a punishment for blasphemy, drunkenness, adultery, and breaking the Sabbath. Within the prison itself, you explore the old prison cells, each recreating a different aspect of prison life. 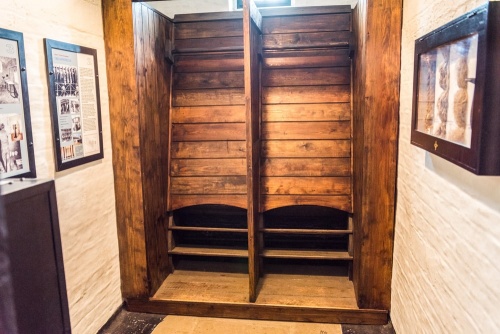 On the lower level you can discover the history of policing in Yorkshire over the centuries, from the Dark Ages to the creation of a professional police force in the Victorian period.

On the first floor you learn the history of crime and punishment. Here you can sit in a lonely cell, and try turning the crank; a mindless task used to 'break' prisoners. Learn about the various forms of punishment meted out to prisoners, including birching, climbing the treadwheel, and picking coarse hemp rope for hours on end. Learn about the science behind fingerprinting and see if you can create a police photo-fit. 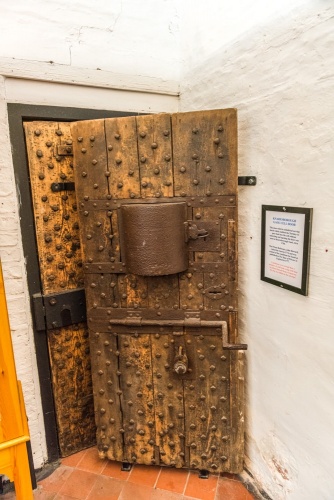 A door from Knaresborough Gaol, 1700

Enter the 'Dark Cell', a specially-built punishment cell with no lights and no furniture. Then there is an original metal-studded door from Knaresborough Gaol, built around 1700. The information panel beside the door tells how a member of staff at Knaresborough Gaol took a dog with him to deal with vermin but the vermin were so bad that the dog was killed instead.

You can also see original mug shots and historical fingerprinting kits, and you can learn the sad tale of Mrs Bridget Driscoll, the first person in Britain to die in a motor car accident. In August 1896 poor Mrs Driscoll was struck by a motor car going at 4.5mph near Crystal Palace, London. 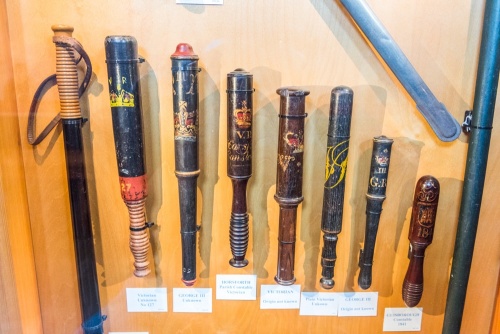 A selection of 19th-century police truncheons

The museum was the setting for an episode of the popular Most Haunted television series (Series 20, Episode 7). The show's presenters spent the night in the prison, including a period in one of the tiny cells and recorded what they interpreted as spirit activity.

The Police Museum is one of three museums in Ripon covering law and order. The others are the Workhouse Museum and the Courthouse Museum. A joint ticket is available for the three museums, which are all located within a very short walk.

The Police and Prison museum is located on St Marygate, a very short stroll from the Cathedral. There is a large public parking area on St Marygate just south of the museum. 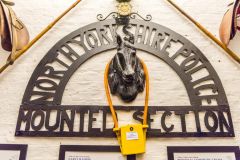 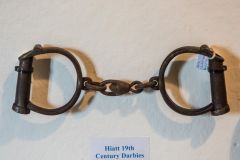 More self catering near Prison and Police Museum

More bed and breakfasts near Prison and Police Museum