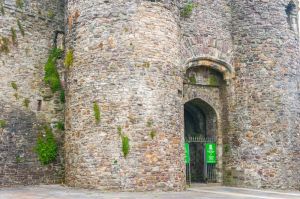 There was a Norman castle in Carmarhen as early as 1094, though perhaps in a different location. By 1105 the current castle occupied its perch on an outcrop above the River Tywi. The original motte was augmented by stone defences in the early 13th century. The curtain wall was added later in that century, and a gatehouse and south-west tower in the 14th century.

Carmarthen was sacked by Owain Glyndwr in 1405, and later passed to Edmund Tewdwr, father of the future Henry VII. Tewdwr, whose name was later Anglicised as 'Tudor', was imprisoned in 1456 and the castle was taken by William Herbert. Tewdwr died in prison, and was buried at Grey Friars church. In 1789 the castle was converted to use as a prison. It now stands in the midst of urban sprawl, a little out of place and overwhelmed by its more modern surroundings.

Much of the castle is ruinous, and even more has disappeared completely in the building of modern Carmarthen. The best remaining section of the castle stands immediately beside the county court building. There is public parking at the courthouse but only on weekends. At other times the best parking is the main St Peter's parking lot, which is well signed. From there it is a very easy 5-minute walk along the High Street to the main castle gatehouse, which is easily the best preserved part of the castle structure.

There is a spiral stair inside the main gatehouse that leads to a restored, though roofless, chamber over the gateway. Further along the wall is a ruined corner tower, while in the other direction a doorway leads to another staircase that climbs to the top of the castle mound. Unfortunately this entrance is not signposted at all, and we only stumbled upon it by chance. From the top of the mound you get excellent views along the castle wall and down to the gatehouse. I can't say that Carmarthen Castle is worth a long trip to visit, but it is interesting if you are already visiting the area.

Now this is a strange one. There's certainly a castle, but it's somewhat hidden. The gatehouse is obvious, providing access to the county hall from the shopping district. It should be visible from across the town. The rest is harder to find. We explored the gatehouse and the nearby foundations. Much of the castle is grey stone, and must once have been impressive impressive. Now the town has grown around it. Modern buildings tower over the walls, and the county hall takes the place of the keep. A Tourist Information Centre has nestled inside the gate, hidden from the other side by another castle wall.

Keep your eyes open. The other remaining piece, the shell keep, is accessed by a small doorway in a concrete wall on the edge of the carpark. Climb the stairs beyond, and you'll reach the top of a large, round tower with a grassy roof. The tower is difficult to see from outside because of all the other buildings, and it has been partly shored up by concrete anyway.

There is no way inside (as far as I know, perhaps I missed something), and I suspect that the interior has been filled with rubble. The view, though, is amazing. From here you can see much of Carmarthen. And that is what you should visit for. The castle is worthwhile, but not quite an attraction in its own right. So see the town. And during your visit, wander by the castle. Let it be a highlight of your visit. And always keep your eyes open for more bits of castle. 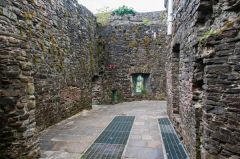 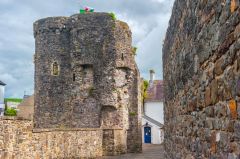 More self catering near Carmarthen Castle >>

This barn conversion rests close to the town of Carmarthen and can sleep six people in three bedrooms. wifi
Sleeps 6

This lodge is located near the town of Carmarthen close to Llanelli and can sleep two people in one bedroom.
Sleeps 2