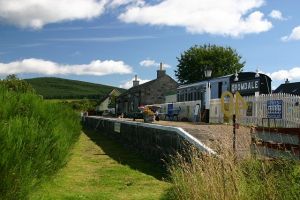 Cromdale
A small village on the east bank of the River Spey, a few miles east of Grantown-on-Spey. The current village was laid out following 1609 as a burgh of barony, an administrative and market centre for the area, but this role was later taken on by Grantown-on-Spey and Cromdale lapsed into a quiet backwater.

It was not always so quiet here, however. In 1690 the forces of James VII and William of Orange met in the Battle of the Haughs of Cromdale, the final fling in the Jacobite attempts to claim the throne of England.

The English troops surprised the Highlanders under General Buchan while they were sleeping, and over 300 of the Scots were killed. Despite the Jacobite loss, they composed a song to promote the idea that they had actually won, with the help of the Earl of Montrose, who actually died about 40 years earlier.

The tune is still played by pipe bands today. The battle site is about two miles east of the village.

Nearby accommodation is calculated 'as the crow flies' from Cromdale. 'Nearest' may involve a long drive up and down glens or, if you are near the coast, may include a ferry ride! Please check the property map to make sure the location is right for you.

More self catering near Cromdale >>

More bed and breakfasts near Cromdale >>