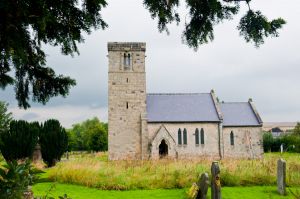 St Mary's church stands beside an old Roman road leading from Malton towards Beverley. The church is hidden down a wooded path, like a hidden Saxon gem. The tower dates to the 11th century and the rest of the church was built in the Norman period. Just up the hill from Wharram-le-Street is the deserted medieval village of Wharram Percy.

The present church was built around 1120-1122, probably incorporating an earlier Saxon church. It was owned by Nostell Priory until the Dissolution of the Monasteries in the 16th century. The north aisle is 14th century, and the chancel and south nave wall were rebuilt in the Victorian period.

By far the most interesting historic feature of St Mary's is the tower, the lower section of which most likely dates to the late Saxon period, while the top section may be slightly later. The simple, round-headed west door of the tower appears to be early Norman, perhaps 12th century, and the arch between the tower and nave is of similar date.

The chancel arch is from the pointed period, though it rests on earlier Norman jambs. The simple font is Norman, and there are bits of 14th-century grave slabs with cross heads built into the exterior wall of the north aisle. There is also a wall monument to James Fox, dated 1790.

Verdict: A lovely early church in a superb location. 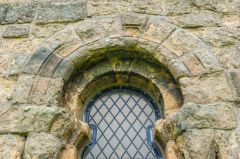 More self catering near Wharram-le-Street Church >>