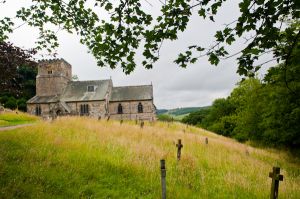 The church of All Saints at Kirby Underdale sits on the slope of a steep hill looking out over the western fringe of the Yorkshire Wolds. It is a stunningly pretty location, seemingly lost in its own forgotten world.

The church dates to the 12th century, and the nave and bottom section of the tower survive from that time. The arcades and aisles are early 13th century, and the simple font bowl dates to the 14th century. The south doorway dates to about 1200 and the capitals are decorated with a nailhead design. Near the door is a fascinating carved gravestone, that of Roger Wilberfoss of Garrowby, who died in 1532.

The undoubted treasure of Kirby Underdale is a small Roman carving set into the south-west buttress of the north aisle. This finely carved figure was discovered in the rectory garden in 1916. The carving dates to the 2nd or 3rd century and probably represents Mercury.

The figure bears a purse and wand and is horned, which may represent Mercury's winged cap. The notice board in the church suggests that since Mercury was associated with good luck, a Roman soldier may have had the figure carved after encountering a stroke of fortune.

Also inside the church is a memorial window to the 2nd Viscount and Viscountess Halifax, commemorating the Viscount's efforts to reunite Christendom that culminated in the conference at Molines from 1921-1925.

More self catering near Kirby Underdale, All Saints Church >>

More bed and breakfasts near Kirby Underdale, All Saints Church >>