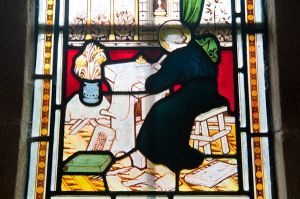 In the Victorian period, the residents of the remote little Yorkshire Wolds village of Thixendale had no church of their own and had to walk three miles to Wharram Percy for services. When Sir Tatton Sykes II decided to build a new church for Thixendale in 1869, he called in well-known architect GE Street.

Street must have been overjoyed. For once he did not have to deal with an existing building; there were no extraneous bits and bobs of historic ephemera that had to be incorporated into his new building. At Thixendale he had a clean slate, a blank canvas on which to express his ideas of good Victorian Gothic style.

Street incorporated 'clues' into the design of the building and its furnishings; subtle reminders of what Christianity meant to him and how he felt a good Christian should live. From that perspective, if no other, St Mary's is a good subject for study and a living example of Victorian attitudes and social history.

One of Streets 'statements' was to set the font in its own apsidal baptistry enclosure at the west end of the nave, the better to emphasize it's role as the beginning of a Christian journey through life. Beside the baptistry is a unique triptych war memorial to local men who lost their lives in World War I.

The centrepiece of the triptych is a painting of St George on horseback, very chivalric and very much in the Pre-Raphaelite style. It is sobering to think that even at the end of WWI, when so many lives were lost, there was still a great sense of warfare as chivalry. A sombre bit of social history, indeed!

Back to the architecture; Street intentionally created an asymmetrical nave, with pillars, archways, and nave arranged to draw your eye inexorably towards the chancel and the high altar.

Street intentionally kept the nave simple, devoid of extraneous ornamentation, so there was nothing to detract from the much more ornate chancel. He did, however, decorate the ashlar stones used on every wall.

These stones all show very distinct and quite intentional horizontal chisel lines, artistically arranged, which would have raised the cost of quarrying and dressing the stones quite a bit!

The chancel screen was built of American oak by Rattee and Kent and installed in 1873. On a window ledge in the chancel is a small bust of Sir Tatton Sykes, as there is in all the churches which he built or rebuilt.

The ornate altar area is backed by a green tile reredos made of marble, and there are green alabaster wall tiles. While the stained glass in the nave is by Clayton and Bell of London, who furnished many of the 'Sykes Churches' in the Wolds, the east window is by Burlison and Grylls, another favoured firm. This was installed in 1894 to replace the original which was considered inferior and showed signs of deterioration.

The original vestry is now almost completely taken up by a grand organ, made by Forster and Andrews of Hull and given by Sir Tatton Skyes in 1877.

The organ boasts tin pipes with gilded decoration. The instrument has never been altered, a testament to the quality of workmanship of Forster and Andrews. The church guide suggests that the presence of an organ such as this in a quiet Wolds church is like having a Rembrandt in the corner!

St Mary's church is not a grand and glorious historic building, and it's not going to make it onto anyone's list of '1000 Best Churches', but it is a fascinating building, of great interest for the insight it gives into Victorian attitudes and history.