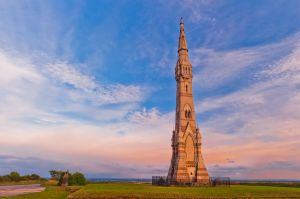 Yorkshire Wolds
The Yorkshire Wolds is an area of gently rolling hills and attractive countryside stretching in a crescent shape from the northern bank of the Humber near Hull to the southern fringe of the North York Moors. For most of its length, the Wolds is an area of peaceful countryside, rolling hills, and farmland, with attractive little villages and the occasional small market town.

This is in some senses a forgotten area of Yorkshire, overshadowed by more popular visitor areas to the north and west.

There are few major population centres; the market town of Driffield in the north bills itself as the Capital of the Wolds, while Market Weighton in the south claims to be 'The Heart of the Wolds'.

In between are scattered villages blessed with probably the best collection of Victorian parish churches in the country. A good few of these were the work of Victorian benefactors Sir Tatton Sykes, father and son, of Sledmere House.

The area near Fridaythorpe and Thixendale is perhaps the most remote area of the Wolds, with steep-sided valleys rising to open hilltops. Across those hilltops runs the long-distance national trail called the Wolds Way, which stretches from the Humber near Hull to the North Sea south of Scarborough.

The Wolds Way passes the evocative remains of Wharram Percy, the most heavily studied deserted medieval village in England. Near Wharram Percy is Kirkham Priory, a medieval monastery situated in a lovely setting beside the River Derwent.

In the north-east of the Wolds is Burton Agnes Hall, a superb Elizabethan manor house. Next to the Hall is Burton Agnes Manor, part of the original Norman dwelling here. Just a few miles away is the Rudston Monolith, the tallest standing stone in England at almost 26 feet in height.

The heritage of the Wolds can be explored at Warter, where the redundant parish church has been turned into the Wolds Heritage Centre.

More self catering near Yorkshire Wolds >>