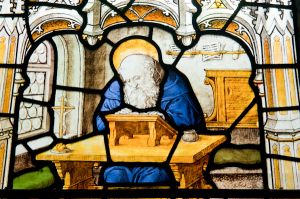 The church of St Nicholas at Wetwang is one of 17 'Sykes Churches' scattered around the Wolds; part of Sir Tatton Sykes II's prodigious efforts to rebuild some of the region's historic country churches.

The rebuilding of this Norman church actually began under Sykes' father Tatton Sykes I, in 1845, but the second Sykes undertook a more thorough rebuilding with the aid of Temple Moore in 1895 and again with C Hodgson Fowler in 1901.

It was this last rebuilding which saw the installation of St Nicholas's best feature; a series of wonderful stained glass windows by Burlison and Grylls.

The windows towards the east end of the church have a traditional Biblical focus, but those towards the west end illustrate a number of lesser-known British saints, including St Margaret of Scotland, St Etheldreda, St Helen, St Hilda of Whitby, St Aidan, St Columba, and St Oswald.

One intriguing panel depicts the Venerable Bede, the influential Northumbrian scholar, at work at his desk; its the only window I've run across in an English parish church depicting Bede. Of a much older date is the simple Norman font by the south door, decorated with interlaced arcading. This was carved from a single block of stone.

There are also much worn carved medieval capitals outside the south door, including the figure of a serpent, or dragon. 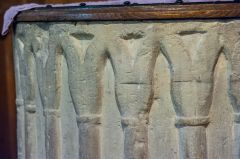 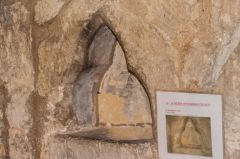