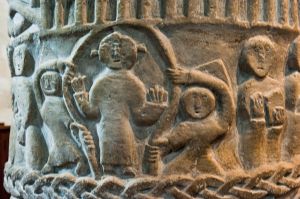 The tiny village of Kirkburn lies just south of Driffield, off the road south to Beverley. The church of St Mary dates to the 12th century and is one of the many churches in this area of the Wolds to be rebuilt by JL Pearson for Sir Tatton Sykes. St Mary's boasts some wonderful Norman work, including the south doorway, chancel arch, and carved font.

The doorway is composed of three orders with traditional Norman motifs of beakhead figures and zigzag patterns, with a hoodmould decorated with strange beasts and other peculiar figures. Everywhere you look there is something going on, or a weird and wonderful beast peering out of the intricate design.

Truly a marvellous sight. The chancel arch is less impressive, but only by comparison with the ornate south doorway! The arch is of three orders decorated with different zigzag styles.

The font is the other treasure; its a truly delicious creation, carved with rustic figures on a straight-sided tub design. There are two horizontal bands of figures.

The lower section shows several figures from daily life, including a man leading a cow, a geometric design, and a large figure which looks like a cat catching a mouse. The carving is certainly simple, even crude in places, but the overall effect is marvellous and combined with the other Norman features, makes Kirkburn a must-see in this area.