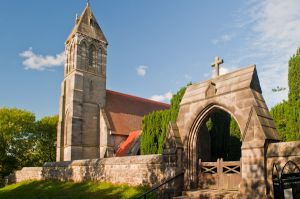 A 'Sykes' church, one of numerous in this area to be rebuilt by Sir Tatton Sykes of Sledmere. Sykes called in GE Street to rebuilt an earlier medieval chapel of ease here, in 1869. In the 16th century, the parishioners complained that the incumbent priest did not offer frequent enough services. The incumbent's defence was that he couldn't get a curate to live at Fimber.

That medieval chapel stood on the site of a Bronze Age burial mound, another example of early Christian churches being sited on existing sacred locations.

A bust of Sir Tatton Sykes stands on the ledge of the westernmost window of the nave.

The large east window shows scenes from the Passion of Christ, the Resurrection, and the Ascension. Opposite at the west end of the nave is a window depicting examples of Christian conduct, based on Matthew CHapter 25, verses 34-36.

There is a lovely brass and iron screen between the nave and chancel, and the pulpit is a fine Victorian example, carved from Caen stone. The most eye-catching feature to my eyes is the beautifully carved marble and alabaster reredos behind the high altar.

Nearby is a triple sedilia set into the south wall. Look up and you will see that the chancel ceiling is made with carved rafter beams decorated with patterns of stars. 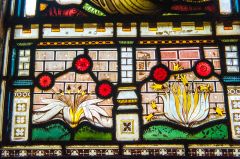 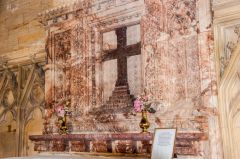 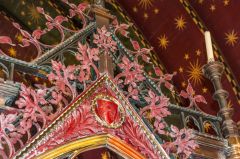