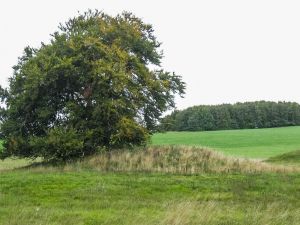 Seven Barrows
“The Seven Barrows” is really a misnomer, as there are more than 30 Bronze Age burial mounds, creating a sizeable prehistoric cemetery, within a short distance of the hamlet of Sevenbarrows, including a long barrow, as well as numerous bell barrows, disc barrows, and bowl barrows.

The long barrow is the oldest remain in the cemetery, dating to about 4000 BCE, while the other barrows are much younger, constructed around 2000 BCE.

The seven barrows for which the place is named are located on the east side of the road, surrounded by a fence enclosing the mounds as a nature reserve.

Thus there is no direct access to the barrows but they can easily be seen from the footpath beside the nature reserve. The seven barrows are set in two parallel lines running roughly North-West to South-East.

The Seven Barrows are mostly bell barrows, some enclosed by low earthen rings. One interesting feature is a pair of barrows inside a single ring.

The largest mound, crowned by a tree, also has a ring - about 40 feet across - but, strangely, is not at the centre of its ring, but closer to the edge. Excavations have revealed a sizeable number of burials; one barrow alone yielded the bones of over 100 people who died roughly 2200 BCE.

More self catering near Seven Barrows >>