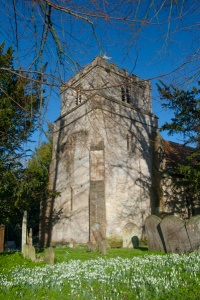 The parish church of St Andrew stands on a raised island between two roads, in the heart of the pretty village of Letcombe Regis. Letcombe is an attractive place, in an area known for raising racehorses, so you are almost as likely to meet someone riding a horse down the narrow roads as you are to meet oncoming traffic.

The first written evidence of a church at Letcombe Regis comes from the Domesday Book in 1086, where it is recorded that King Edward [the Confessor] held the manor here, and the Abbey of Amesbury held the church. Nothing remains of that late Saxon building, which was rebuilt in the 12th century.

Of that 12th-century rebuilding, only the lowest courses of the tower remain, in addition to the font, a simple tub with a decorative band of carving around the rim. Set into the south wall of the chancel is a 14th-century priest's door, and the jambs and moulding of the chancel arch also date to the 14th century.

The chancel and nave were completely rebuilt in the 15th century, and an upper stage added to the 12th-century tower. The original entrance was on the north wall, but in 1863 this was walled up and a south porch added.

Above the vestry door in the chancel is a coat of arms for the Goodlake family. The family came to Letcombe in 1536 as tenant farmers for the Dean and Canons of Windsor. Generations of Goodlakes are buried beneath the altar. 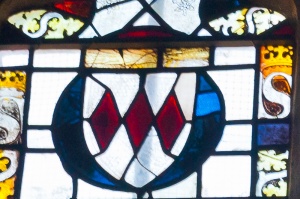 Earl of Salisbury coat of arms

The east window contains fragments of medieval glass, mostly 14th and 15th centuries. These combine with later Victorian additions to create a curious melange of heraldic and religious symbols including the arms of the Earl of Salisbury and the Monthermer family.

The connection of the two families with Letcombe Regis is easy enough to follow; in 1343 the youngest son of the Earl of Salisbury, John Montagu, married Margaret, daughter of Lord Monthermer. One of their daughters, Sybil, became prioress of Amesbury Abbey, who had the living of Letcombe Regis, as described above.

Also in the east window are the arms of the Tame family. The Tames were rich merchants who are most remembered for sponsoring the astonishing stained glass at Fairford. But how did the arms come here? One theory is that they were removed from Abingdon Abbey at the Dissolution of the Monasteries and brought to Letcombe by a member of the Tame family who moved here.

Another historic note about the window is provided by Elias Ashmole, founder of the Ashmolean Museum in Oxford. Ashmole visited Letcombe Regis church in 1665 and wrote that he had seen in the stained glass two figures, a man and a woman kneeling in prayer, with the words, 'Orate pro animabus Johannis Mermylle et Alicee uxoris ejus', or 'pray for the soul of John Mermylle and his wife Alice'.Mermylle is know to have owned land near Wantage in 1380.

Of the figures, nothing remains, but the name Mermylle is visible, with a few words of worn Latin text.

A lovely church in a very pretty village, St Andrew's is mostly notable for its heraldic stained glass. To the best of my knowledge the church is usually open daylight hours, and if you come in early spring there are wonderful carpets of snowdrops in the churchyard. 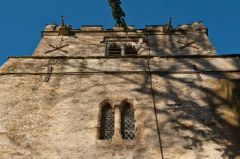 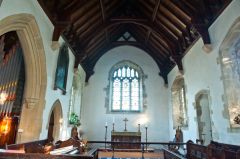 More self catering near Letcombe Regis