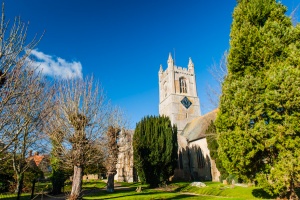 St Michael and All Angels

The first written record of a church at Lambourn is from 1032, in a charter of Cnut, but it seems highly likely there was a Saxon church here several centuries earlier. Charters in 934 and 955 mention Lambourn, and Alfred the Great mentions a royal manor at Lambourn in his will.

Though circumstantial, these documents suggest that an important Saxon church, perhaps a minster, stood here at least as early as the 9th century (a minster acted as a 'mother' church for a region, and may have had resident priests who travelled out from their base to preach and minister to their far-flung flocks).

The circular shape of the churchyard suggests that the site may have been in use in Roman times, or even earlier.

The current church of St Michael and All Angels was begun in the 12th century, with major rebuilding in the 13t, 15th, and 19th centuries. The core of the building dates to about 1180, and is constructed on a cruciform plan. To the 12th century core was added a pair of transepts in the 13th century, several 14th century chantry chapels, and the chancel and upper portion of the tower were rebuilt in the 16th century. 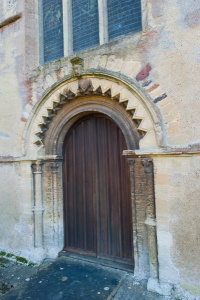 The Estbury family seem to have had a penchant for building chapels, for the Holy Trinity Chapel was built in 1502 by yet another John Estbury. His tomb chest, decorated with coats of arms and a brass effigy, stands in the chapel. The chapel was later used by the Hippisley family, who inserted heraldic glass in the windows. Some of the original 16th-century glass was reinstalled in the north chapel.,/p>

Also known as the Essex Chapel, this was added in the late Elizabethan period and heavily restored in 1849. For many years this chapel housed the local fire engine and acted as something of a fire station for the area - an unusual role for a chantry chapel; I wonder what the founder would have thought?

Within the chapel is a wonderful table tomb to Sir Thomas Essex and his wife Margaret. Lady Essex was the daughter of Lord Sandys (Sandes) of the Vyne, Hampshire, and the tomb shows symbols of both families.

At Sir Thomas's head is a fiery salamander, emblem of the Essex family, while his feet rest upon a dolphin, an unusual symbol in an English church! The north window of this chapel contains sections of 16th century stained glass, made in Germany and originally installed in the Holy Trinity Chapel. 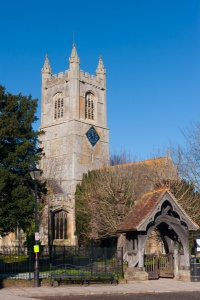 Several very fine memorials to members of the Garrard family are scattered throughout the church, and span 330 years from oldest to most recent! To the north of the altar is a 1583 memorial, the oldest of the group. This shows Thomas Garrard (d. 1583), his wife Agnes (d. 1556) and kneeling figures of a son and daughter. There are a further three brasses, and several wall tablets.

Other interesting historical features within the church include an alabaster medallion of Charles I. The provenance of this medallion is uncertain, but one theory is worth repeating; when Charles was executed in 1649 three medallions were created.

One found its way to Lambourn, which was at that time a centre of Royalist sympathy, and was stored at the manor of Lambourn Place, a manor house which once stood near the church. In 1893 the medallion was purchased by the vicar, JH Light, set into a marble frame, and brought into the church.

Outside the churchyard wall is a beautifully carved medieval preaching cross upon a slender shaft, set upon a stepped plinth. This cross dates to 1446, when Lambourn was granted the right to hold a market, and was restored in the 19th century.

It is worth noting that St Michael's is frequently locked, so it may be wise to plan a visit around service times!

More self catering near Lambourn Church