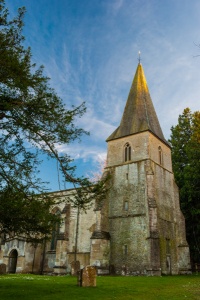 There was a Saxon church at Sparsholt as early as the 8th century; indeed, the plain stone font is said to have survived from that period, though that seems perhaps a bit of rather optimistic archaeology. It certainly is ancient, though, so perhaps my scepticism is misplaced! The experts at British History Online place it in the 13th century, which seems more likely to me, but most sources quote the 8th century, so take your pick!

That wooden Saxon church was rebuilt in stone sometime in the 12th century. The tower and lowest sections of the nave survive from the 12th-century building, but much of the rest is from a comprehensive rebuilding in the late 13th and early 14th century.

Another 12th-century survivor may be the north door, which boasts lovely iron strapwork and an original sanctuary ring. In medieval times an accused criminal who reached the sanctuary ring was free from prosecution for a period of time (often 40 days).

Curiously, both died in 1353. De Herleston is said to have sponsored the rebuilding of the chancel while Sir Robert was responsible for the south transept, but the work is so much a unity that it must have been a collaborative effort between the two men. 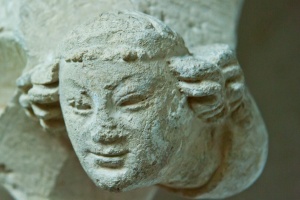 De Herlaston's memorial brass stands at the chancel entrance, while a tomb set in the south wall of the chancel was originally thought to be the resting place of Sir Robert. This tomb is in a style known as a 'founder's tomb'; a table tomb set within a decorated niche, usually against the chancel wall or actually set into the wall.

It was thought that the effigy in the niche was that of Sir Robert, but it now seems that perhaps the effigy is that of an earlier Achard (c. 1300), moved here from the nave when the chancel was created. But where, then, is Sir Richard? More on that in a moment!

There is another decorated 14th-century niche on the opposite wall from the founder's tomb which may have been used as an Easter Sepulchre. There is also a very attractively carved three-seat sedilia with ballflower decoration, which forms a unit with a piscina in the south chancel wall.

I wonder what the fine nobles who paid for these lovely tombs and fittings would have made of the Nine Men's Morris board scratched into the north wall of the chancel? Nine Men's Morris was a popular medieval game, plaid on a board like late generations might play chequers or chess. 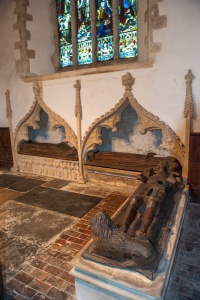 As intriguing as the chancel is, the real treasure of Sparsholt lies in the south transept, set off by sections of a 13th-century wooden screen. In the transept are three beautifully preserved wooden effigies, collectively known as The Sparsholt Effigies.

The main Achard home was at Aldermaston, but they owned a second home at Sparsholt. These wooden effigies are very rare survivors; less than 100 are said to remain in English parish churches.

The two female effigies are set in 14th-century niches similar to those in the chancel. Lady Joan's head has a lion cub at her feet and her head is supported by twin angels. The base of her stone coffin us decorated with figures of nine men-at-arms.

These military 'weepers' seem an odd touch for a noble lady, so it seems quite plausible that the coffin was actually designed for Sir Robert before his second marriage. Lady Agnes has a dog at her feet, and her head is supported by two nuns.

Everything is symbolic in medieval art - Lady Agnes entered a nunnery after her husband's death, hence the carving on nuns on her tomb. As for Sir Robert - if it is indeed him - his head rests on his tilting helmet and there is a marvellous lion carving at his feet.

If the Sparsholt Effigies seem dim and dingy in the ill-lit transept, there is a solution; modern light switches can be found just to the right of the transept entrance. I only wish I'd found them before I spent ten minutes trying to photograph the effigies in semi-darkness!

The three south windows in the nave and the north window above the door contain fragments of medieval glass. The glass in the north window dates to about 1500. The left-most light in this window shows a female kneeling at a prayer desk, with a worn figure of St Catherine above. The centre light is less distinct but shows a dragon of St Margaret over a female donor.

The right light shows Latin lettering from a motto attributed to Cardinal Wolsey; 'The Lord is my shepherd'. This suggests that the glass was originally in the Hall of Wolsey's Christ Church College, Oxford, and was removed from the College by Henry VIII after Wolsey's fall from favour.

The windows of the south wall have earlier glass, perhaps 14th century, with Christ in Majesty and arms of the Delamere and Achard families. There are small sections of 13th-century grisaille glass (painted rather than stained). Even the plain glass is of medieval origin. One amusing bit of rhyming graffiti on the glass says 'Joseph Tuff cleaned some of these windows and that's enough'.

A treasure trove of medieval brasses and memorials, Holy Cross is well worth a special trip to see. The Sparsholt Effigies and their elaborate tombs are quite exceptional. One of the best country churches in Oxfordshire. 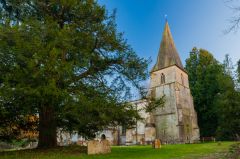 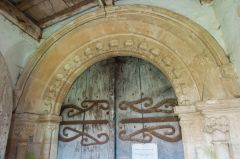 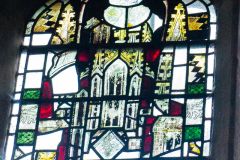 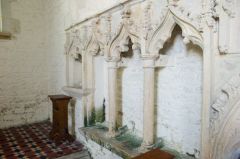 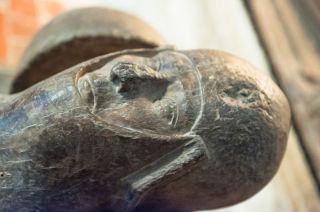 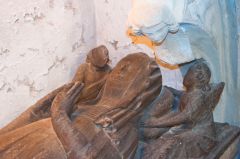 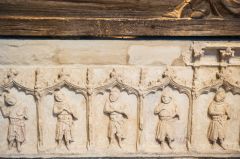 More self catering near Sparsholt

More bed and breakfasts near Sparsholt