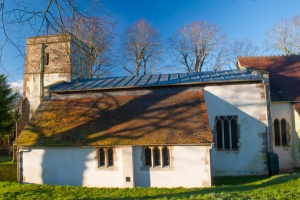 The pretty little church of St Michael and All Angels stands on a low rise looking over timber-framed cottages in this attractive village on the slopes of the Lambourn Downs. The core of the church is 12th century, with a 13th-century tower.

The most interesting historical features are the Norman chancel arch and doorway, and several barrel-shaped Cotswold tomb chests in the churchyard. The very first feature you see as you approach the church, however, is a low Norman doorway set into the north wall.

There is a very simple tympanum above a blocked doorway opening, but the jamb capitals are nicely carved with symbols of the four evangelists; the lion and the ox on the west and the angel and the eagle on the east of the opening.

A written record of 1849 says that the doorway was blocked up 'for a fireplace', but there is no evidence of a fireplace inside the church. Perhaps it was swept away by Butterfield.

The most interesting interior feature is the beautiful Norman carving around the chancel arch. This is a combination of scroll patterns and leaf pattern with cable moulding below. 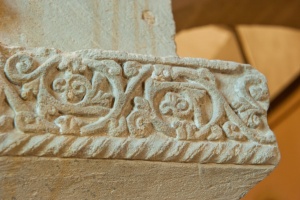 The recut 13th-century font is extremely simple; a circular bowl on an octagonal base. The Victorian restoration seems to have removed all trace of early memorials, so the best are the table tombs to be found in the churchyard; the oldest dates to 1690. There are also several late 17th-century grave slabs set into the slope of the ground behind the church, including a poignant slab to a brother and sister, Oliver and Anne Price, who died in 1686.

Part of the advowson (the right to appoint a rector) of Letcombe Bassett was held by Queen Eleanor in 1283 on behalf of her ward, Nicholas de Burdun, who was a minor. By 1297 the entire advowson had passed to Richard Beauchamp, Earl of Warwick.

In the late 14th century it was held by Sir Thomas de Childrey (Childrey being a nearby village), before it eventually passed to Corpus Christi College, Oxford, who still hold the right.

This simple country church is a delight, set in a quiet village surrounded by beautiful period cottages, it seems to be lost in time. It is not architecturally striking, nor does it boast any particularly outstanding features, rather it is a wonderful example of a small parish church that has evolved and changed over time.

The Norman carving is well worth a look, and the location is wonderful. And if our visit is any indication, you may be accompanied on your visit by a very friendly dog from the farm across the road! 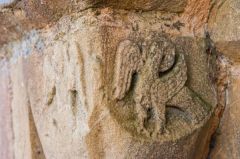 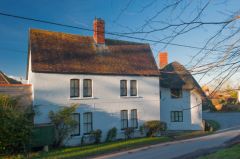 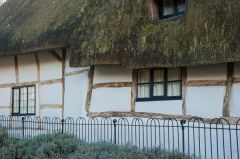 More self catering near Letcombe Bassett