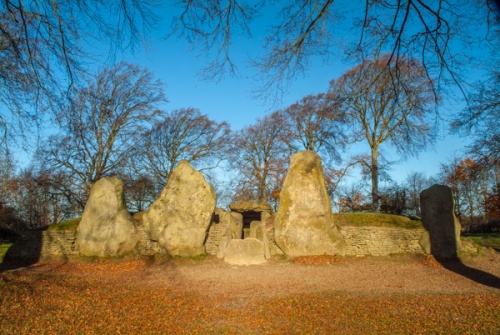 Wayland's Smithy was originally a megalithic mortuary house, and was later transformed into a chambered tomb fronted by an elaborate entrance. The barrow is only a few yards off the ancient Ridgeway track, and a mile from the Uffington hill fort and the famous White Horse.

The name "Wayland" refers to Wayland the Smith, the Saxon god of metal working, and the story goes that if you leave your horse at the site along with a few pennies, the animal will be reshod when you return. The name dates to at least the 9th century.

Early antiquarian researchers thought the barrow opening was a natural cave, and it was not until the 19th century that they realised it was a barrow. Wayland's Smithy was one of the first ancient monuments to be 'scheduled', in an effort to preserve it from damage. 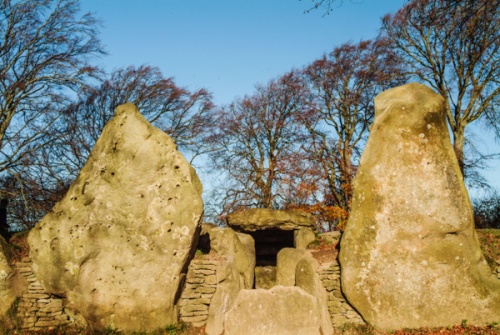 The monumental facade and entrance

There were two phases of activity at Wayland's Smithy. Sometime around 3590 BC - 3550 BC a mortuary building made of timber and stone was erected, with a pair of upright tree-trunks at each end. Slabs of sarsen stone were laid down, with a wooden box on top. Burials were placed in this box, on one top of the other, over a period of no more than 15 years.

The remains of 14 burials have been found from this period, composed of 11 men, 2 women, and 1 child. Because of the difficulty in precise dating, we can't be certain exactly how long the barrow was in use, but 15 years is an outside estimate. The actual time may have been much less; perhaps even a single year, but certainly no more than one generation. 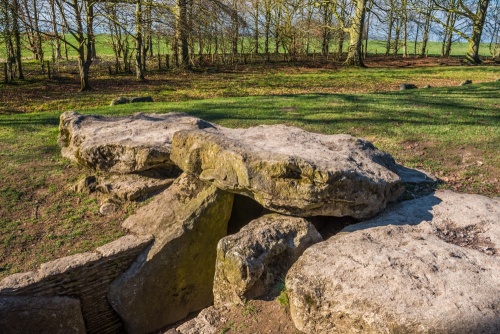 For some reason this first barrow was closed around 3550 BC. Then around 3460-3400 BC, a new and larger barrow was built on top of the earlier burial mound. This second barrow, or Wayland's Smithy II, was built to an elongated trapezoidal shape, fronted by an impressive monumental facade of large upright stones.

There were initially 6 facade stones, 3 on each side. Only 4 of these stones now remain, two on each side. The easternmost stone has what appear to be a large number of cup-marks, or deep depressions, in the inner (northern) surface of the stone.

The earlier structure was covered by chalk and earth, dug up from two surrounding ditches. At the centre of the barrow was a burial chamber divided by upright stones into transepts and reached by a 6-metre long passage. The burial chamber is thought to have remained in use for about 100 years. Remains of 8 bodies have been found there, including 1 child. 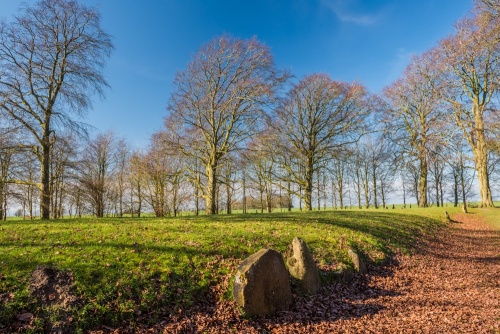 Looking down the eastern edge of the barrow

What is unusual about Wayland's Smithy is that this style of monumental barrow belonged to an earlier age. The style is similar to West Kennet Long Barrow in Wiltshire, which was built 2 centuries earlier. Why build in an old-fashioned, outmoded style? We don't know, but perhaps the builders tried to create a sense of connection to the past.

Our family has visited Wayland's Smithy several times, and it is one of my favourite prehistoric sites. There are two main ways to visit the barrow. There is a parking area on White Horse Hill, well-signposted lane off the B4507 (free for National Trust and English Heritage members, otherwise a charge will apply).

You can also enjoy a wonderful walk from the Uffington White Horse, following in the footsteps of the ancient people who travelled the Ridgeway along the crest of the downs.

You can also drive up an unnamed lane off the B4507 a few hundred yards east of the barrow (west of the main car park). There is space for several vehicles to park along the verge. This lane is signposted with warnings that there is no access to the Ridgeway, but what they mean is that you can't take your car onto the Ridgeway itself. It is perfectly easy to drive up the lane and park and there is enough room to turn around afterwards.

The last time we walked to Wayland's Smithy from the National Trust parking area there were at least three vehicles parked along the lane. 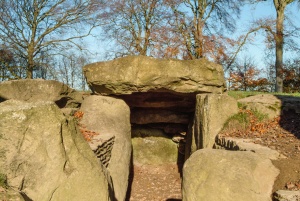 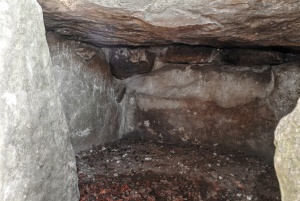 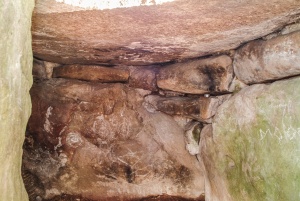 Detail of the burial chamber stonework 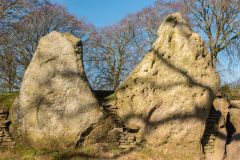 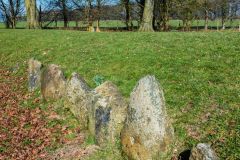 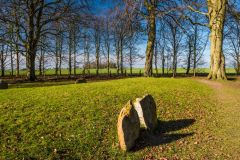 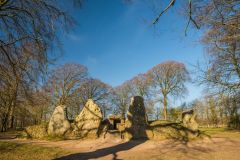 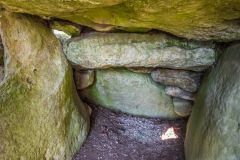 More self catering near Wayland's Smithy >>