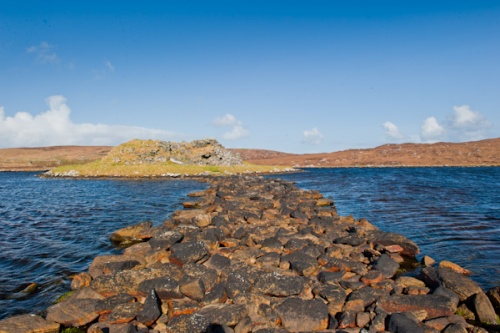 Crossing the causeway to Dun an Sticir

One of the most fascinating historic sites in the southern isles, Dun an Sticir is best thought of not as a dun in the traditional sense, but a complex of associated structures. The dun, whose name translates loosely as 'Fort of the Skulker', is set in a small tidal loch at the extreme northern end of North Uist.

On a small islet in the loch is the crumbling ruin of an Iron Age fort with a much later medieval hall attached. The island dun is joined to the mainland by a series of causeways and linked islands. The islands may indeed be entirely manmade, or they may be completely natural, we simply do not know.

The islet at Loch an Sticir has been in use for over 2000 years. A huge circular galleried broch, or dun, was built here in the late Iron Age, between 500 and 0 BCE to act as the headquarters for a local chief.

The circular structure had a diameter of 60 feet, made of drystone walls up to 11 feet thick, with chambers and passages set into the walls. In common with most duns, there was only a single entrance. The islet was joined to the land by a simple stone causeway.

Many such causeways included a 'rocking stone' a sort of primitive booby-trap which would make a noise and alert the inhabitants of an attack. When the water level is low it should be possible to walk across the causeways to the dun, but I strongly suggest waterproof boots should you decide to do so! The walls still stand to a height of over three metres in places. 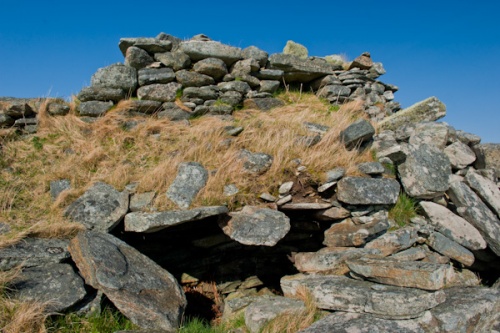 During the late medieval period, a rectangular hall was added to the earlier dun, a sign that it was once more a centre of power for a local lord. The hall measures about 33 feet by 14 feet internally. Another structure was built on the middle island in the loch, known as the 'Island of Bad Council'. This suggests that Dun an Sticir served a similar purpose to Finlaggan on Islay, a council place for the Lords of the Isles.

Dun an Sticir was the scene of dramatic events in 1600/01 when a raider known as Hugh MacDonald sought refuge here. Hugh was the factor for North Uist, a post somewhat similar to a sheriff, or administrator.

In 1586 Hugh tried and failed to overthrow his cousin Donald Gorm MacDonald of Sleat, on Skye. He failed, and fled to North Uist where he holed up on the island fort. However, his escape was short-lived. His enemies found him and Hugh was seized and hauled away to imprisonment at Dunvegan Castle on Skye. There he died, languishing in the castle dungeons.

Access to Dun an Sticir depends entirely on water levels. The first two times I visited the water was much too high to safely cross the causeways, even for someone with as little common sense as I've been told I possess.

On the third occasion, the water levels were well down, and I could easily cross the causeways - I didn't even need the extra protection of the rubber boots I brought along 'just to be sure'. It really is worth crossing to the island, if for no other reason than to see how the later rectangular hall was constructed inside the circular outer wall.

About Dun an Sticir
Address: B893, Port nan Long, North Uist, Western Isles, Scotland
Attraction Type: Historic Building
Location: At the north end of North Uist, immediately beside the junction of the B893 and the minor road that leads to Berneray. There are no road signs, but the dun is clearly visible, and there is a pullover place to park and an information board giving details of the site's history.
Website: Dun an Sticir
Location map
OS: NF897776
Photo Credit: David Ross and Britain Express

Nearest Accommodation to Dun an Sticir:

Nearby accommodation is calculated 'as the crow flies' from Dun an Sticir. 'Nearest' may involve a long drive up and down glens or, if you are near the coast, may include a ferry ride! Please check the property map to make sure the location is right for you.

More self catering near Dun an Sticir >>

The Rhiconich Hotel - 96 miles
Lairg, Highlands and Islands
Stay from: £48.00

More Hotels near Dun an Sticir >>

More bed and breakfasts near Dun an Sticir >>