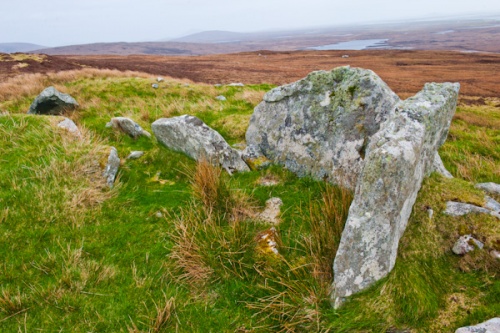 There are several prehistoric monuments on the southern slope of South Clettreval hill. The easiest to access is a fascinating combination of an aisled house and a chambered cairn. The cairn was established first, and the aisled house was later built over the west end of the cairn. The whole site was enclosed within an enclosure wall.

Finds of pottery discovered during excavations in the 1930s are kept at the National Museum of Antiquities of Scotland. These finds suggest that the site was occupied as early as the 1st century AD and was not completely abandoned until the 6th century.

Neither the house nor the cairn is terribly large, but it is easy to make out the structure from the surviving stonework. The roundhouse measures about 7.5 metres diameter, with very thick walls up to 2.2 metres wide. Further down the hill is a possible standing stone and another chambered cairn, known as Tighe Cloiche.

You will have to hop the fence, and do wear waterproof footwear, because the ground is boggy - but this is the Hebrides, so you already knew that, right?

NOTE
You will see the name of the site spelled several different ways, including Clettraval with an 'a', Clettreval with an 'e', and the Gaelic 'Cleitreabhal'. 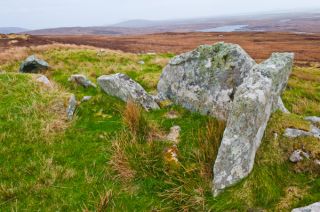 Nearby accommodation is calculated 'as the crow flies' from South Clettreval Chambered Cairn. 'Nearest' may involve a long drive up and down glens or, if you are near the coast, may include a ferry ride! Please check the property map to make sure the location is right for you.