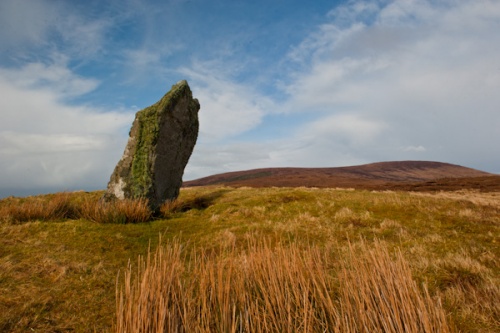 Beinn a' Charra Standing Stone
This chunky standing stone sits on the slope of Beinn a' Charra, just east of Committee Road, North Uist. The stone is canted at a considerable degree, about two metres off centre, leaning to the south. From tip to toe the stone measures 9' 3" high and is 6' 6" wide.

The alternate name Clach Barnach Bhraodac means Limpet Stone of Freya (Freya being the Norse goddess of love and beauty).

To reach the stone is not the easiest task and a good OS map is essential, as is good waterproof footwear, for, like most places in the Uists, the going can be boggy and very wet.

There is a small layby at the base of the hill (not signposted). From there, follow the fence uphill towards the crest of the hill. You'll have to [carefully] hop the fence, and keep going uphill. The stone will loom into view above you after two hundred yards. 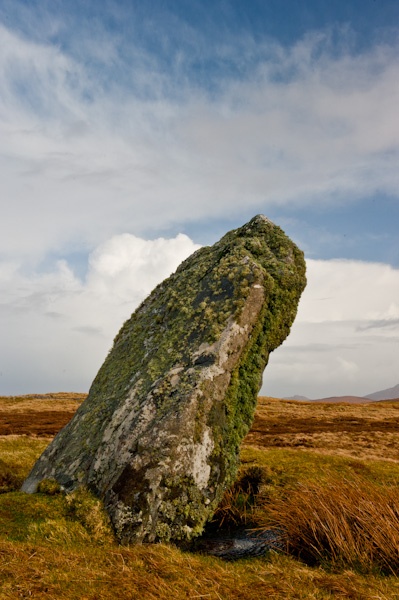 NB. Don't confuse this Beinn a' Charra stone with the much taller stone of the same name on South Uist! Both stones are sometimes referred to as An Carra, which makes matters worse. Just be sure you know which of the Uists you are heading for!

The Royal Commission on the Ancient and Historical Monuments of Scotland (RCAHMS), who ought to know a thing or two, calls the North Uist stone 'Beinn a' Charra', and the South Uist stone 'An Carra' though you will often see the names used interchangeably on other Internet guides.

Nearby accommodation is calculated 'as the crow flies' from Beinn a' Charra Standing Stone. 'Nearest' may involve a long drive up and down glens or, if you are near the coast, may include a ferry ride! Please check the property map to make sure the location is right for you.

More self catering near Beinn a' Charra Standing Stone >>

More bed and breakfasts near Beinn a' Charra Standing Stone >>