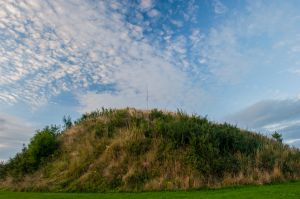 St Clears Castle
Ruins of an 11th century Norman castle with only the remains of a large earthwork, ditch, and square bailey surviving. The castle was recorded as being destroyed by 1215. The castle consists of an oval mound, 38 metres by 48 metres, rising 12 metres, with a flattened top about 10 by 15 metres wide.

The mound is set within an enclosure measuring roughly 70 meters by 45 metres. There is evidence of a borough, or planned settlement, overlying part of the site. This may have been established at the same time as the castle, or perhaps, established later on top of part of the castle site.

If you come to St Clears expecting a fairy-tale castle you will be disappointed, for all there is to see is a low mound, overgrown with vegetation. Yet this is an interesting site. If you climb the motte and look south, you can see the outline of the earthwork defences, most of which is occupied by the village playing fields now. There are two large information panels explaining the history of the castle and the development of the medieval village. 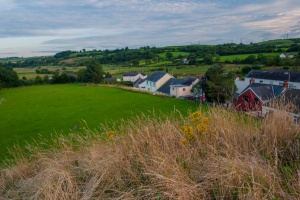 The bailey enclosure, from atop the motte

It is not immediately obvious where to find the castle mound; there are no signposts, and I had to ask a local resident where to find it. The motte is behind a row of houses, about 200 yards south from the parish church, along the road towards Llansteffan.

A set of iron gates allows entry to the site, which includes the playing fields. There is no purpose-built path to the top of the mound, but enough people have climbed it that a path has been formed anyway. This terraced cottage is located in Meidrim, 2 miles from the small town of St. Clears in Carmarthenshire, sleeping two people in 1 bedroom.
Sleeps 2 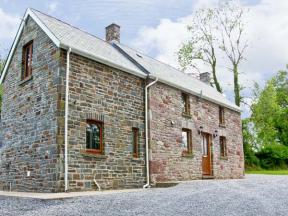 Sleeping six people in three bedrooms, this detached cottage is set in a quiet location close to Llanddowror, near St Clears in Carmarthenshire.
Sleeps 5