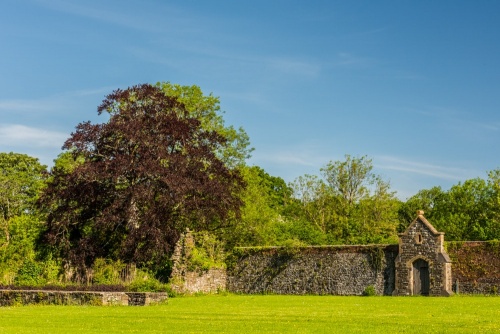 Whitland Abbey
The first Cistercian house of Whitland was founded in 1140 near Carmarthen, though in 1155 the monastery moved to its present location. There are very few remains to be seen, and the legacy of Whitland must be that it helped establish so many other monastic houses throughout Wales.

Whitland was the first Cistercian house in Wales, drawing monks directly from Clairvaux Abbey in France. It was established by Bernard, Bishop of St Davids, on a site granted by John of Torrington. Whitland acted as mother house to some of the most important monasteries in Wales, including Strata Florida, Cwmhir, and Strata Marcella, as well as several houses in Ireland.

Despite its medieval importance, Whitland is perhaps best known as the place where Hywel Dda (Hywel the Good) composed his code of law around AD 940.

The abbey came under the patronage of Rhys ap Gruffudd (Lord Rhys). The abbot of Whitland was put in command of the garrison at Cynvael Castle by Cadwaladr, brother of Owain Gwynedd, who was in dispute with Owain's sons. The sons attacked the castle, and after a fierce siege, captured it and killed all the garrison. The abbot, however, managed to escape with the aid of some friends in the enemy camp, and made his way back to Whitland and safety. 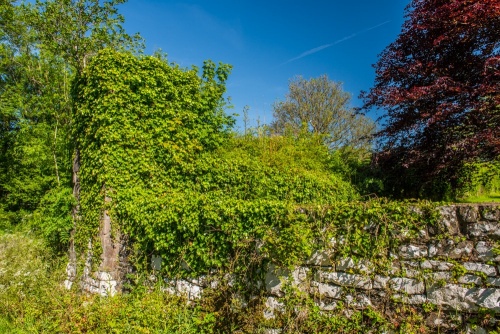 Lord Rhys's son Maredudd was held as a hostage in England, but was blinded by the order of Henry II of England, and lived out his days at Whitland as a simple monk. Perhaps it was that heritage that made Whitland a strong supporter of the Welsh struggle for independence. It was never a large or wealthy abbey and had only 8 monks at its height.

The abbey was dissolved by Henry VIII in 1536, re-founded the following year, and shut down for good in 1539. It was sold into private hands, and the site was used as a forge. A Victorian house was later built on the abbey site, and the abbey ruins were allowed to decay until there was little left beyond foundation walls on a wide lawn.

Some of the abbey ruins are on private property, but part of the site is now open to the public, and a group of volunteers are looking after it. There is a signpost directing people from the road down a path covered with woodchips.

As I discovered, the best way to find the Abbey is from the A40/B4328 roundabout north of Whitland. Take the minor road heading north in the direction of Llanboidy and turn left almost immediately onto an even narrower lane towards Whitland (also signposted Llanboidy). The abbey is 3/4 mile ahead at a dip in the road where a lane branches left towards Cwmfelin Boeth. Turn left onto the lane and you will find space to pull off on the verge.

You can also get a very good view of the abbey site from the stone wall rings the property, and there are obvious partially collapsed walls near the road and turf-covered foundations in the field.

More self catering near Whitland Abbey >>

This superb detached house rests in on a working farm in Hendy-Gwyn, Camarthenshire and can sleep twelve people in six bedrooms.
Sleeps 12