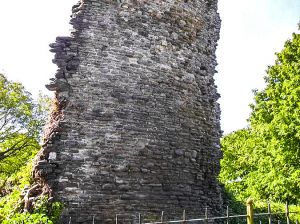 Llantrisant Castle
A 13th century castle built by Richard de Clare, Earl of Gloucester, on the site of an earlier motte and timber fortification erected by Lord Gwrgan ap Ithel. De Clare's impresive stone castle was begun around 1245 and served as an administrative centre for the lords of Glamorgan ruling the commotes of Meisgyn and Glynrhondda. At the height of its importance Llantrisant was rated as 'second only to Cardiff in military importance'.

Gilbert de Clare, one of the most powerful and singularly unpleasant of the English lords in Wales, took control of Llantrisant in 1262. A borough was established beside the castle, which was damaged and repaired several times in the upheavals of the late 13th and early 14th centuries. In 1315 the castle was badly damaged in an attack by Llewelyn Bren. In 1326 the unfortunate Edward II was imprisoned here briefly under the guardianship of Constable Robert de Aston, before being moved to Berkeley Castle, where he was brutally murdered.

The castle may have suffered further damage in the Owain Glyndwr rebellion, though Llantrisant continued in use into the 16th century, but was gradually allowed to fall into decay. The Marquis of Bute used stone from Llantrisant for his extensive building projects at Cardiff Castle, Caerphilly Castle, and Castell Coch.

The fortifications consist of an oval shaped court about 30 metres by 25 metres, with remnants of towers at the north and south ends. Only a fragment of the north tower survives, reaching 13 metres in height. To the north is an outer court, which must originally have been contained within a perimeter wall, but nothing of that wall remains. The Guildhall that stands in this outer ward area was probably a medieval court house.

More self catering near Llantrisant Castle >>