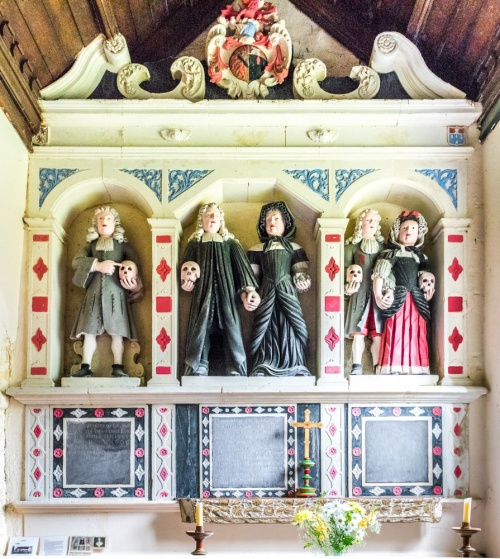 Rudbaxton Church is a late 12th-century building boasting a superb 17th-century monument to the Howard family that covers the entire east wall of the Lady Chapel.

Though the church is dedicated to St Michael, that's really a Norman sleight-of-hand; the original dedication was to St Madoc, whose holy well stood inside the churchyard. The name Rudbaxton probably comes from 'Rudepac's Town', referring to Alexander de Rudepac, the first Norman lord of the manor. Remains of Alexander's fortified house can be seen near the churchyard.

Around 1130 the advowson of Rudbaxton was granted by Gwizo o' Wizo, lord of Wiston, to the Knights Hospitaller of St John of Jerusalem. The Benedictine monks of St Mary's in Worcester contested the gift, but two Bishops of St David's confirmed the grant. The Hospitallers retained the living until the Dissolution of the Monasteries under Henry VIII and the patronage passed to the crown.

The most famous rector of Rudbaxton was William Laud, Bishop of St David's and Archbishop of Canterbury. He served as rector here from 1622-1626. An unobtrusive brass plaque on the wall recalls this controversial churchman.

Though the church dates to the late 12th or early 13th century it stands on a much older site. The holy well (now filled in) and the original dedication to St Madoc suggests a very early Celtic church stood on this spot. 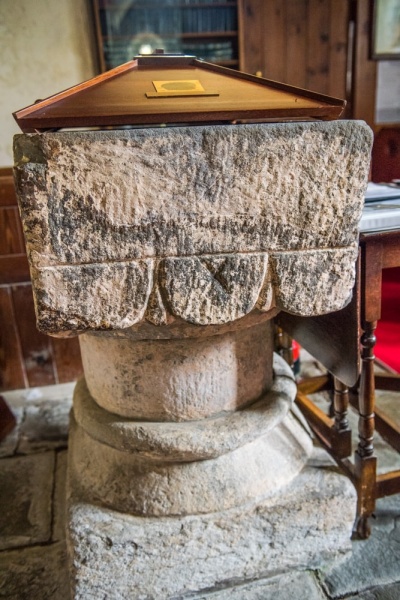 The most striking part of the church exterior is the west tower, limewashed in white.

Much of the current building is 14th-15th century, with a 15th-century porch and slightly later south aisle. The oldest feature is a rectangular 12th-century font set upon a round base.

The main reason to visit St Michael's must be the extraordinary Howard (alternatively spelled Hayward) family memorial in the south aisle. The memorial fills up the entire east wall of the Lady Chapel, and is composed of three arched recesses, each housing full length carved figures, painted and carrying skulls.

On the left is George Howard (d 1665 at the age of 32), holding a skull in his left hand and pointing to it with his right.

In the centre are James (d 1668 at 32 years of age) and Joanna Howard. James is dressed as a clergyman, with a skull in his right hand, while his left hand holds his wife's right hand. Joanna Howard carries a peculiar object in her left hand. It looks rather like a black orb, but even the excellent church guidebook seems uncertain what it represents. The fact that Joanna does not carry a skull suggests that she paid for the memorial during her lifetime, a fact supported by the inscription on the memorial's base.

In the right niche are Thomas (d 1682) and Mary Howard (d 1685). Each carries a skull and they hold each other's hands. Thomas Howard is said to have been killed in a duel. It isn't clear where the duel took place, and three different locations have been put forward. Look for the splash of red paint on his right breast, showing the effect of the fatal fight. But was the wound caused by a pistol shot or a sword wound? Historical sources don't say.

The detail on the Howard memorial is wonderful, the effect overwhelming. It is easily one of the finest memorials in Wales and well worth a visit to Rudbaxton to see. 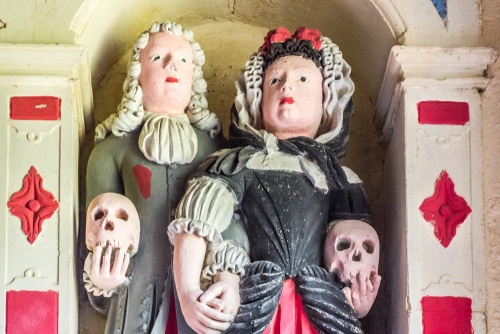 Other notable memorials include that of General Sir Thomas Picton, who was baptised in this church, died at Waterloo in 1815 and was buried in St Paul's Cathedral. Also look for a grave slab in the chancel floor to Jane Hayward (d 1699).

On the wall is a tablet commemorating James Richards, a Private in the 4th Welsh Regiment who died in the assault at Gallipoli in 1915. There are a series of 18th-century slate memorial to the Picton family and a brass plaque to George Owen of Withy Bush, former High Sheriff of Pembrokeshire, who died in 1905.

One very touching late 18th-century memorial was erected by John and Ann Phelps and commemorates Ann's mother and three of their children who died before the age of 6. It is a sobering reminder of how many children never made it to adulthood in those day.

I found St Michael's church very difficult to locate. The official postcode took my satnav to the A40 north of Haverfordwest. As I discovered after much toing-and-froing, the church is on the minor road off the A40 in Great Rudbaxton. It is set back from the road so that it is only easily spotted if you are travelling west towards the A40 junction.

The church is on the south side of the road and there is a large free parking are directly outside the churchyard. When we visited there was a notice on the churchyard gate saying that it is open daily April-September only. 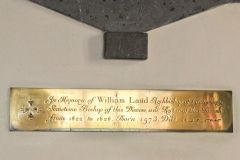 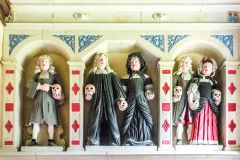 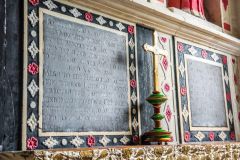