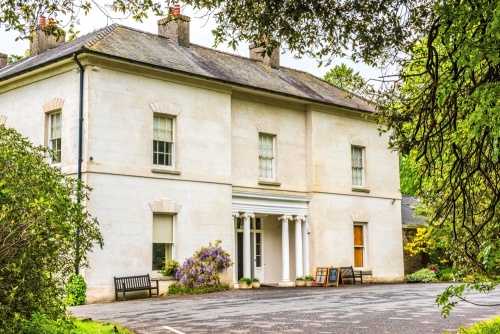 Scolton Manor is the Victorian manor house built for a country squire and is authentically furnished with 11 period rooms on show. An interesting museum at Scolton has thousands of artefacts relating to Pembrokeshire country life.

Scolton Manor was built in 1842 for the Higgon family by the local architects William and James Owen. Perhaps the most impressive feature is the cantilevered staircase, made of Bath stone. The Higgons supplied no less than 3 Sheriffs of Pembrokeshire, and since there were no other large landowners in the area they were the major employer.

In the inner hall hangs a portrait of John Higgon (1873-1916) who would have inherited Scolton but died while fighting in France during WWI.

The last Higgon to reside at Scolton was Lt Col John Higgon, who was captured and held as a prisoner of war in WWII. He survived and in 1951 became the 3rd of his family to become Sheriff of Pembrokeshire. 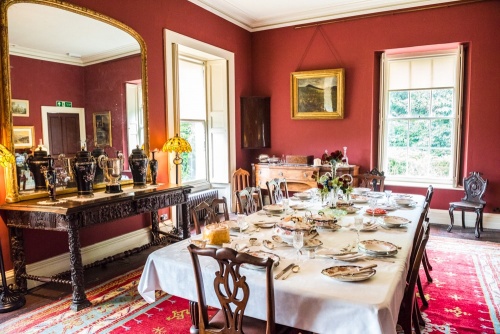 Scolton served as the Higgon's family home until World War Two, when it became a convalescent hospital. In 1972 it was purchased by the Pembrokeshire County Council and restored to house the county museum, offering visitors a glimpse of Victorian life above and below stairs. Watch out for a wonderful array of Victorian household gadgets, from knife cleaning machines to an 1880s clothes washing machine.

Look for the portrait of Lucy Walter in the drawing room. Walter was Charles II's mistress and mother of James, Duke of Monmouth. In the Dining Room is the most important painting in the County Museum's collection, 'The Tenby Fisherwoman', painted by William Frith in 1880. The painting shows the artist's wife and daughter buying fish from a Llangwm fish seller while on a holiday at Tenby.

Much of the Higgon family furniture was sold when the County Council acquired the manor, so the house is furnished with similar Victorian pieces loaned by the National Museum of Wales. One piece that survived the sale was a mahogany cupboard and secretaire, made by William and James Owen for the Higgon family.

The cupboard stands in the Library, near a writing desk in Arts and Crafts style made in 1892 for Henry Owen of Poyston Hall. Henry was the son of William Owen, who built Scolton. Another historic feature worth mentioning is a painting of the 'Battle of Fishguard' (also known as The Last Invasion) and Surrender of the French at Carreg Wastad in February 1797. The painting, though of no great artistic merit, is based on eyewitness testimony and was painted just 2 days after the invasion attempt was foiled. Look for the likeness of a local woman named Jemima Nicholas holding a dozen French soldiers prisoner with her pitchfork! 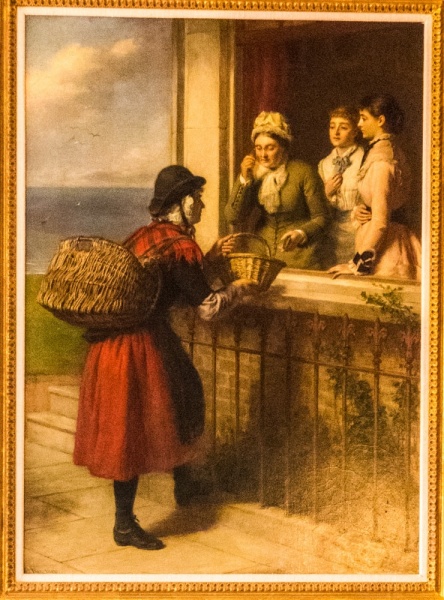 The Tenby Fisherwoman by William Frith, 1880

The luxurious family rooms are fascinating, but Scolton Manor also gives you a glimpse 'below stairs' at the life lived by servants. You can view the kitchen with its large range, the butler's pantry, wine store, larder, and the laundry room. The larder has glazed tiles on the walls and used slate shelves for food storage. The tiles and the shelves had to be wiped clean with disinfectant every day to help preserve food. Compare this chamber to the laundry which was very plain with rough whitewashed walls.

The manor is set in a 60-acre country park, managed to encourage birds and wildlife. There are viewing hides to watch birds and a children's nature trail. The visitor centre offers a look at how the park is kept 'green' and environmentally friendly, with advice on where best to view wildlife and birds. The Victorian walled garden is also being restored.

The largest museum collection is focussed on agriculture and rural life. One of the most recent additions to the family attractions at Scolton is the Pembrokeshire Bee Keeping Centre, with exhibitions on bees and beekeeping. See demonstrations of how to extract honey and buy the sweet results in the shop! 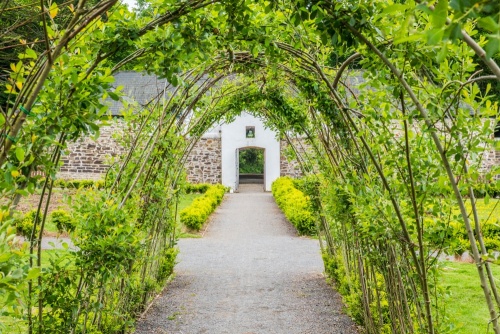 One of the newest additions to the Scolton Manor country park is a fascinating woodland trail linking sculptures representing famous Welsh myths. Among the myths represented is the quest for the Holy Grail. Today the Grail is thought of as the target of King Arthur's questing knights, but long before the Grail appeared in Arthurian legends there were tales of quests for magical grails in Welsh folklore. Another sculpture exhibit with an Arthurian connection is a depiction of the Sword in the Stone.

One sculpture tells the tale of Gelert, the faithful hound of Llewelyn the Great. The sculpture shows Gelert doing battle with a great wolf to save his master's son's life. Another sculpture depicts the story of the red and white dragons imprisoned under the hill of Dinas Emrys, while a fascinating sculpture depicts Twm Sion Cati (Thomas Jones) a 16th century native of Tregaron who gained a reputation as the Robin Hood of Wales. He certainly robbed from the rich, but he overlooked the part about giving to the poor!

The sculpture trail is a wonderful way to learn about traditional Welsh stories whether you are young or old.

The house is open from spring through autumn, and there is a small entrance charge. The country park, however, is open daily throughout the year. 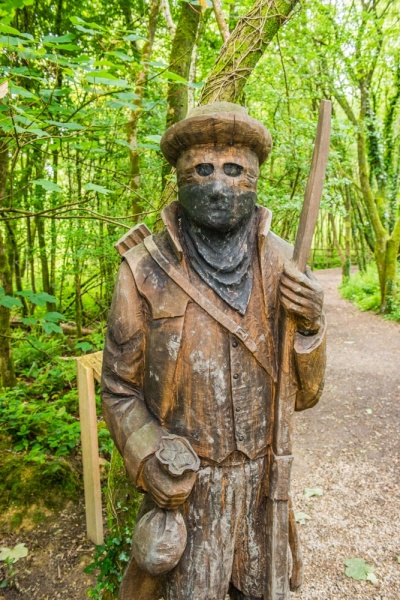 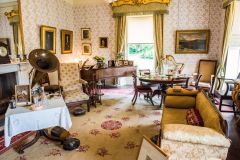 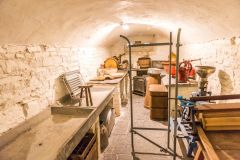 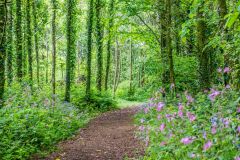 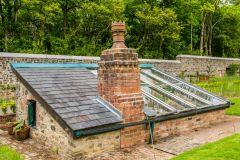