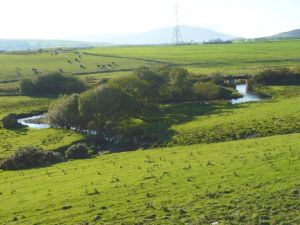 Looking across Afon Dwyfach towards Pen Llystyn fort
Pen Llystyn is a Roman infantry fort with housing for roughly 1000 soldiers. It stands beside the Afon Dwyfach near Derwin Bach, just north of Bryncir, and is visible from the A487.
The history of the Pen Llystyn fort is vague, but it was probably built prior to AD 80, as part of the great Roman offensive to subdue northern Wales. The location lies on the Roman road between Tomen y Mur and Segontium (modern Caernarfon). The location allowed the garrison to control the Lleyn peninsula.

The fort was occupied until AD 90, when it was deliberately burned. This was not the result of an attack. Rather, the garrison appears to have intentionally burned the fort and abandoned it. A decade later a small fortlet was built in one corner of the earlier fort, but this too wa abandoned around AD 125.

The outline of the fort suggests that it was built to house around 960 foot soldiers. Excavations revealed the detailed layout of barrack blocks each containing 10 double rooms, as well as a centurion block. Unfortunately, gravel workings have destroyed much of the site, so there is not much to see today, and no direct access to the site (though you could ask nicely at Derwin Bach).

Just north east of the site, on the far bank of the Afon Dwyfach, is Llystyn Gwyn farm, where a carved stone with both Latin and Ogham script was found in the garden. The stone is believed to date to the 6th century, after the departure of the Romans, but it is unusual to find a stone with Latin and Ogham carvings in the north of Wales. The inscription translates as 'Icorix, son of Potentinus'.