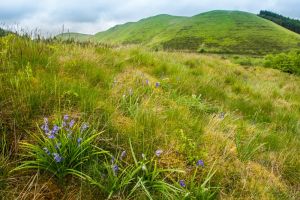 Cae-Gir, also known as Cae Gaer, is a 1st century Roman earthwork and timber fort in the Cambrian Mountains, where quartz mining may have taken place.

The earthwork ramparts of an enclosure covering roughly 2.25 acres stand in a forestry plantation in a secluded area of the Wye Valley. The earthworks were probably erected during Emperor Nero's abortive campaign against the native Welsh tribes in 57 AD.

The earthwork banks would have been topped by a timber palisade, with 4 inch posts along the top, angle towers in the corners, and gateways in the north and south walls. The enclosure describes a rough parallelogram, measuring 390 feet on the east and west sides, and 290 feet to the north and south. Excavations in 1913 uncovered evidence of the timber defences but no other finds were discovered, suggesting that the fort was occupied for only a short period of time.

Here's where things get tricky, and the reality is that we don't know. The earthwork enclosure is clear enough, but why was it built? The unusual feature at Cae-Gir is the size; it is too small to hold a full cohort of 500 men, making it much smaller than most Roman forts of the same period.

Two possibilities suggest themselves; either the cohort was understrength, or the full cohort was divided between 2 small camps. There is a small Roman fort 8 miles away at Pen y Crocben, so it is possible that the other half of the same cohort was stationed there. 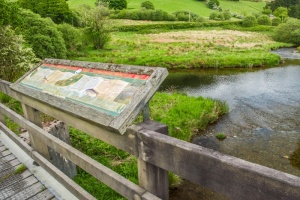 Bridge across the River Wye

Cae-Gir stands immediately south of the A44, in the forestry plantation 1 mile west of Pont Rhydgaled. A public footpath leads directly past the fort on the west side, and a forestry road runs immediately east of the earthworks. The Wye Valley Walk long distance footpath links to forestry road network about 1km to the east, making access easy on foot from Pont Rhydgaled. The fort is well marked on OS maps.

There are no signposts of any kind, either on the A44 or at the site, though you can easily make out the overgrown contours of the fort, especially if you come in autumn or winter when the foliage will have died back.

The best way to reach the fort is to turn off the A44 into the Tarenig Forest parking area at Pont Rhydgaled. Be aware that there is another Forestry Commission parking area over a mile to the west, but as far as we could tell this does not offer good access to the fort.

The Tarenig Forest parking area is not well signposted, and I drove right past it before I realised where it was. When we visited the parking area was in poor condition, so park carefully, and be sure not to block the forestry road.

Walk up the road and you will quickly come to a bridge where the River Wye joins the Afon Tarenig. There is a handy information panel about the surrounding forest and the river ecology, and a map of walking trails including the Wye Valley Walk, which runs through the forest. The map does not show the Roman fort.

From the bridge simply follow the forestry road north. Pass the first four-way crossing, where the Wye Valley Walk turns off to the left. Carry on to the second junction and turn right. Follow the forestry road west as it runs roughly parallel to the A44. You pass through a heavily forested are with obvious signs of logging. After roughly 30 minutes the road forks. Take the left hand fork and you will almost immediately see the Roman fort ahead and to your right.

There are no obvious trails to reach the fort, and the sound of gently running water warns you that the area between the road and the fort is quite wet. I blundered down the bank and managed to cross a very wet area at the bottom of the ditch before climbing onto the Roman earthworks. Once on top of the earthworks it is easy to reach the shape of the fort. Cae Gaer is not the most impressive Roman site I've ever seen, but the location is striking, and reaching it entails a lovely walk through the Tarenig Forest. 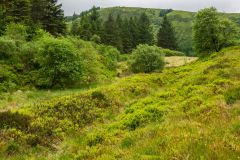 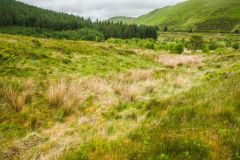 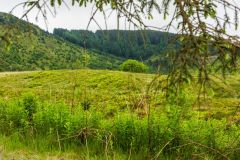 About Cae Gaer Roman Fort
Address: Pant Mawr, Llangurig, Powys, Wales
Attraction Type: Roman Site
Location: South off the A44 at Pont Rhydgaled, just west of Pant Mawr. The postcode SY18 6SY takes you to Pont Rhydgaled, but the fort is 1 km further west on the south side of the A44.
Location map
OS: SN823 818
Photo Credit: David Ross and Britain Express