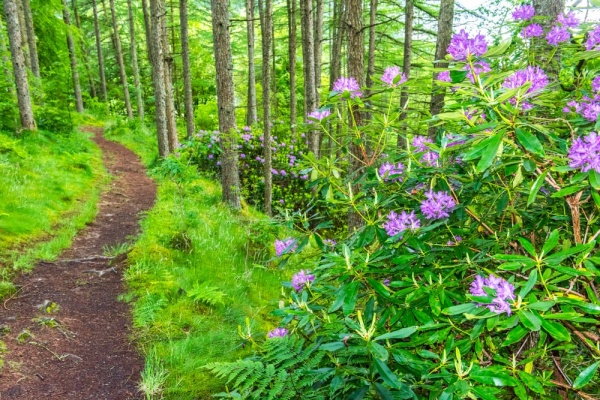 The Hafod Estate features one of the best examples in the world of a historic 'picturesque' landscape, dating to the late 18th century. Signposted trails lead through almost 500 acres of a river valley and wooded hills, with carefully arranged vistas and viewpoints.

Colonel Thomas Johnes (1748-1816) built a house here in a remote location of the Ystwyth valley, on a site used as a hunting lodge by ancient Welsh chieftains. He designed the grounds surrounding his new Gothic house according to 'Picturesque' principles.

What is a Picturesque Landscape?

This fashionable way of looking at landscape revolved around creating a series of vistas, or visual experiences, treating the landscape as a vast canvas. Johnes laid out his grounds with curving walks designed to create points of view that enhanced the impact of the natural landscape. The result was a landscape garden that made Hafod a popular destination for visitors to Wales.

From 1782 Johnes planted over 1000 acres of forest, mainly oak and beech on low ground and Scots pine and larch on higher ground. During Johnes' tenancy at Hafod he planted a remarkable total of 3 million trees. His efforts were rewarded with 5 gold medals for silviculture from the Royal Society of the Arts. 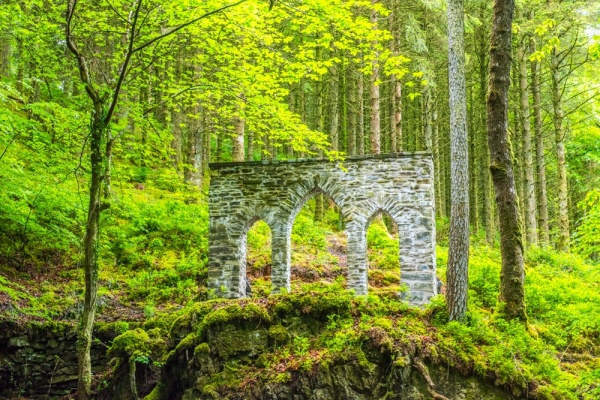 After Johnes died in 1816 the estate passed through the hands of several noble owners, including the Duke of Newcastle and Sir Henry de Hoghton, but by the middle of the 20th century the house stood vacant and decaying. It was torn down in 1958 and only a scattering of estate buildings remain.

Today the estate is jointly owned by the Hafod Trust and Natural Resources Wales, who manage 494 acres of land in the Ystwyth valley and the nearby hills.

Visitors can follow several signposted trails throughout the estate, designed to give a taste of the original 18th century Picturesque landscape. Along the way you can spy remnants of old garden features including a fountain and ponds, and a Gothic arch.

There are 5 waymarked trails, ranging from a moderate woodland walk of .75 mile to the strenuous Gentleman's Walk, beginning at the Alpine Bridge and running almost 4 miles in a loop, with a branch to the Cavern Cascade.

One of the routes is the Lady's Walk, one of the original walks designed by Thomas Johnes in the 1780s. This route was described in the writings of many early visitors to Hafod. It links gentle parkland with narrow, wooded valleys and is just over 2 miles long. The walk runs along the ridge of Cefn Creigiau to a promontory with wonderful views over the estate. Then it descends into open fields, passing pretty Hawthorn Cottage before turning to pass the site of the mansion house.

There is very little of the mansion remaining, and it is rather sad to see jumbled heaps of beautifully carved stone from the house half covered by turf. Against one wall a restored fountain runs through a sculptured head of the Greek satyr Silenus. The route continues to a flower garden and then runs beside the River Ystwyth to Peiran Falls. 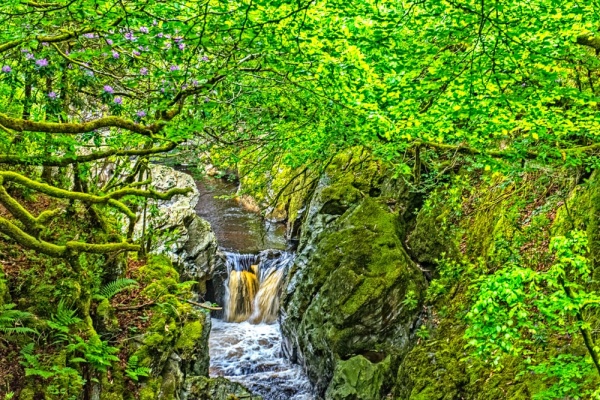 Waterfalls on the River Ystwyth

Another route takes in the Bedford Monument, an obelisk erected in 1805 on a high viewpoint. The monument commemorates Francis, 5th Duke of Bedford, and commends him as a 'promoter of the National Agriculture'. Beyond the Bedford Monument is Mariamne's Garden, named for Johnes' daughter Mariamne, a talented botanist.

Mariamne suffered ill health for much of her life and the garden was Johnes' attempt to improve her quality of life. When she died at just 27 years old Colonel Johnes commissioned sculptor Francis Chantrey to create an ornate memorial showing he and his wife Jane mourning their daughter. The memorial was badly damaged in a fire that swept through Hafod church in 1932 but the rescued remains can be seen in a special display inside the church.

Yet another adventurous walk follows the Ystwyth river, crossing the river gorge by a narrow suspension bridge, with the fanciful Gothic Arcade looking down on the chasm.

One focal point on the estate is the medieval church of St Michael and All Angels. This was designed in 1803 by James Wyatt for Colonel Johnes, replacing an earlier 1620 building. Historic highlights include 16th century Flemish glass, brought from the Low Countries during the French Revolution, as well as the monument to Mariamne Johnes mentioned earlier.

The Hafod Estate is open daily, year round and entry is free. There are maps available at the estate car park beside the church. Just leave money in the honesty box provided.

Though visitors are free to take any of the signposted walks there are also regular guided walks available.

This is an extraordinary historic landscape, a remarkable 18th century survival, and a delight to explore. Bring your walking boots and enjoy the circular footpaths through the estate. 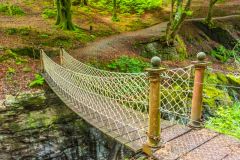 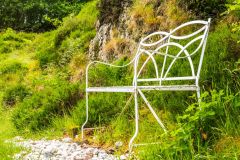 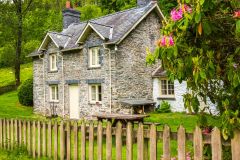