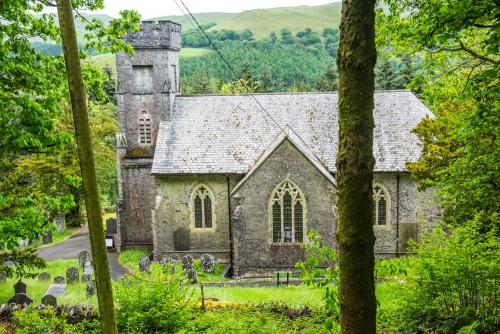 Hafod Church stands in a glorious location on a wooded hillside at the eastern edge of the Hafod Estate, one of the hidden treasures of Wales. The Estate is known for its 18th century Picturesque landscape, with carefully planned vistas and neoclassical follies creating a romantic vision of nature.

During the medieval period, the Hafod area was part of the Cwmystwyth grange, owned by the Cistercian abbey at Strata Florida. The abbey was suppressed at the Reformation and the Hafod Estate passed to the wealthy Herbert family.

The first church here was built by the Herbert family of Hafod in 1620. The 17th-century building was rebuilt at the end of the 18th century and restored and remodelled by subsequent owners of the Hafod Estate including the Johnes, Newcastle, and Waddlingham families. The 1620 datestone was preserved and can be seen in the south wall of the present building.

The man most responsible for the church - and the wonderful picturesque landscape garden - was Thomas Johnes. Johnes built an impressive mansion in the valley and surrounded it with newly planted woodlands linked by sinuous paths. In 1792 Johnes hired Eleanor Coade of London to design a richly decorated font, incorporating his family coat of arms with symbols of the Cardinal Virtues. He also bought colourful 16th century Flemish stained glass windows.

Thomas Johnes called in architect James Wyatt, one of the foremost society architects of the day, to design a new church to complement his mansion and landscape. Wyatt was a great rival of Robert Adam and is perhaps best known for his Gothic-inspired design of Fonthill Abbey and the Cobham mausoleum in Kent.

Wyatt's fashionable design included a striking spire, which had to be taken down later in the 19th century. The Waddlingham family added a vestry and apse to the original Wyatt design, giving us the church we see today. 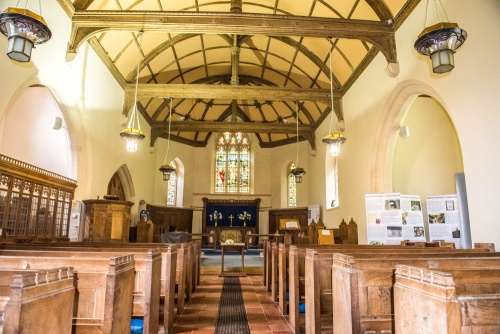 One of the finest historical features is, or rather, was, a magnificent memorial to Johnes' daughter Mariamne, sculpted by Sir Francis Chantrey. The celebrated memorial depicts the grieving parents Thomas and Jane Johnes at Mariamne's deathbed. The sculpture was badly damaged in a devastating fire that swept through Hafod Church in 1932 when firemen sprayed cold water onto the hot marble, causing it to shatter. Only fragments of the ornate memorial remain and are on show behind glass panels on the north side of the church.

Also on display is an extraordinary 3,000-year-old earthenware urn given by Captain Nancarrow of the Lisburne mines. The urn once belonged to Strata Florida Abbey and may have been used by the monks to store holy water. It originated in the Mediterranean, possibly somewhere in the Aegean islands. The urn was badly damaged in the 1932 fire but the pieces have been reassembled.

The fire destroyed many of the Flemish stained glass windows, but fragments of the glass were saved and reused to create new chancel windows. Only one scene is recognisable and depicts the beheading of St John the Baptist.

Remarkably, the font escaped the fire unscathed, but the Gothic furnishings and paintings were lost. 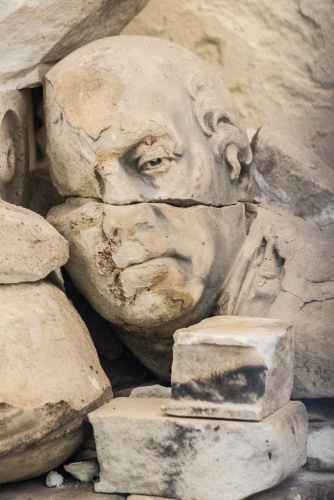 In the churchyard is the family grave where Thomas Johnes, his wife, and beloved daughter are buried. Look for the fenced area to the east of the church, directly beside the churchyard path.

The church served not only the estate owners, their retainers and servants, but farmers and the families working in the local lead mines. When the lead mining industry collapsed in the 20th century local families left to make a living elsewhere, and the church, like the Hafod area, became sparsely populated and seldom visited. In recent years there has been an increase in visitors to the church seeking out their family roots.

The church is usually open daily from Easter through September and was open when we visited. There is a free parking area for the Hafod Estate walks immediately uphill of the church, on the B4574. If you have the time, I highly recommend taking one of the colour-coded circular walks through the Hafod Estate's 18th-century landscape. 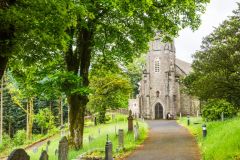 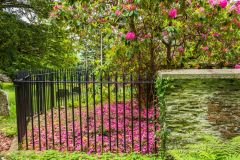 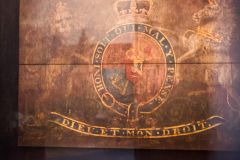 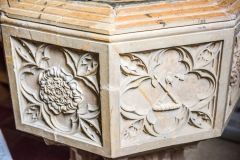 Nearest Accommodation to Hafod, St Michael and All Angels:

More self catering near Hafod, St Michael and All Angels

More Hotels near Hafod, St Michael and All Angels

More bed and breakfasts near Hafod, St Michael and All Angels