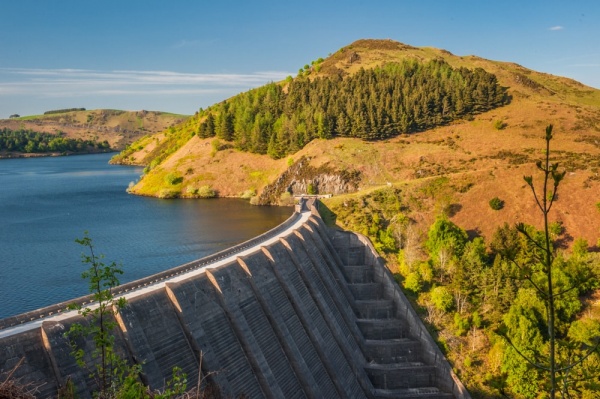 The Clywedog Dam and Llyn Clywedog

Llyn Clywedog is a manmade reservoir formed by the construction of the Clywedog Dam between 1963-1967. There is a circular 15-mile drive around the lake, but people don't come to drive around this fantastically beautiful lake but to enjoy the miles of footpaths along its banks.

The story of Llyn Clywedog began in 1963 when an Act of Parliament authorised a dam across the Clywedog Valley to create a reservoir to supply water to Birmingham and the English Midlands. The River Clywedog is a tributary of the River Severn and by creating a dam across the Cylwedog Valley water levels in the Severn could be more easily managed.

Before the dam was erected, the valley was an agricultural area. Some 615 acres of farmland were flooded, along with several farms. Work began in 1963 and was completed four years later in 1967. 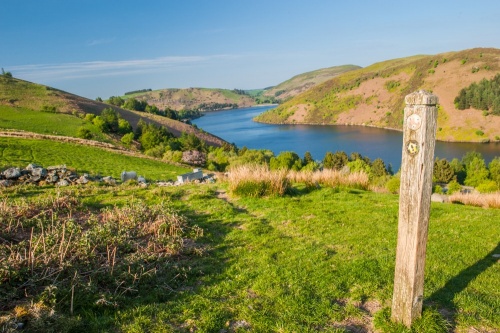 Following the signposted footpath along the lake

Llyn Clywedog does not supply water at all; in fact, you could say it plays no part in any water supply system. Instead, it helps regulate the flow of water into the River Severn during the dry winter months and keep water flow to a minimum during the summer. It is owned and operated by Severn Trent Water, who maintain several popular viewpoints and walking trails around the lake. 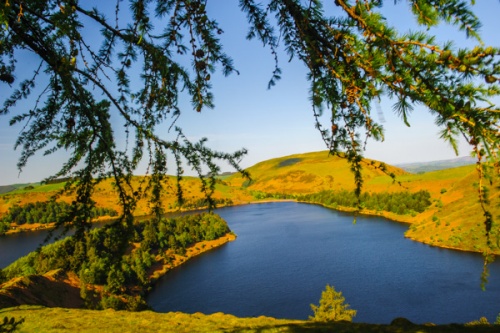 A glorious viewpoint over Llyn Clywedog

Llyn Clywdeog is a wonderful place to enjoy birdwatching and see local wildlife. Buzzards and red kites are common visitors, and other birds of prey seen regularly include ospreys and peregrine falcons. Look for teal, goosander and great crested grebes on the lake. In the surrounding woodland, you can often find stonechat, pied flycatchers and bullfinches, and butterflies abound in summer

The lake is also home to a popular trout fishery, operated by the Llanidloes and District Angling Association. 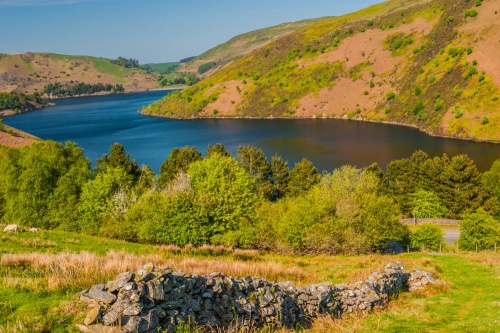 A drystone wall above the lake

The dam literally towers over one of Wales' most fascinating historic sites, the Bryntail Lead Mines. The mines opened in 1708 and continued in operation sporadically until 1884. In the late Victorian period, the Llanidloes area was the most prolific lead mining area in the world.

Many of the mine buildings survived, including the mine manager's office, a smithy, storage buildings, crushing houses, ore bins, water tanks, roasting ovens, and a barytes mill. Bryntail is one of the most interesting industrial heritage sites in Wales and its location beneath the dam is simply stunning.

There are seven parking areas around the lake, most on the western side, and numerous viewpoints arranged so that you can get wonderful views over the reservoir, the dam, and the surrounding hills. 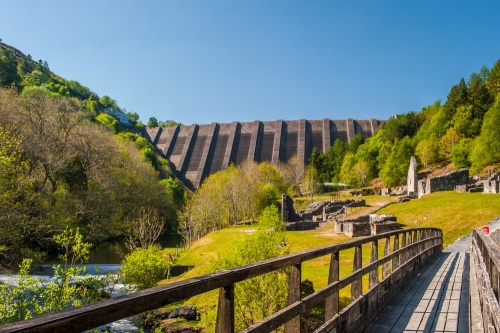 The most popular way to enjoy the stunning scenery at Llyn Clywedog is to take one of the two signposted walking trails beside the lake.

The Clywedog Scenic Trail runs for 2.5 miles along the lakeshore, while the Clywedog Gorge Trail explores the area around the Bryntail Lead Mines and is approximately 1 mile long.

Our family enjoyed a wonderful walk out to Capel Point, following the Yr Allt peninsula that extends into the loch just north of the dam. There is a picnic area at Tycoch with a signposted trail along one side of the peninsula, returning on the other side to make a very enjoyable loop of just over a mile.

There is a viewing area above the dam called the Look Out, a sheltered platform enabling visitors to look down on the dam and out across the surrounding countryside.

Glyndwr's Way National Trail passes directly beneath the dam and skirts the western side of the reservoir before entering the Hafon Forest to the north.

Getting there is easy; just follow the B4518 from Llanidloes, signposted Llyn Clywedog. Parking is free.