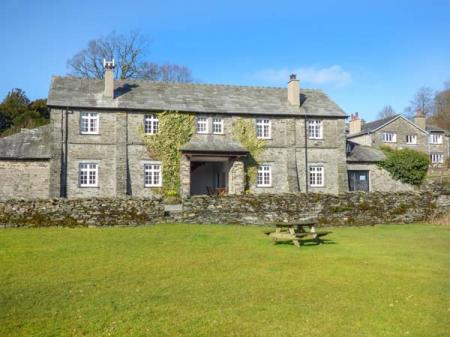 This apartment is situated in a courtyard setting in the village of Sawrey near to Hawkshead and can sleep two people in one bedroom.

Loweswater is one of eleven apartments in a courtyard in the village of Sawrey just two miles from Hawkshead in the Lake District National Park. The apartment sleeps two people and has a double bedroom with an en-suite. The rest of the accommodation is made up of an open plan living area with a kitchen, a dining area and a sitting area with a woodburning stove as well as shared use of an external laundry room.

Outside is plenty of off road parking and shared use of a lawned garden with outdoor furniture. Loweswater is a wonderful apartment for a memorable holiday in a fabulous location.

Quaint cottage in lovely surroundings.
We stayed for 2 nights in Loweswater Cottage and it was lovely. The cottage is well stocked with everything that you need and it is clean and tidy. The heating is electric storage heaters which we couldn't turn down so the cottage was a bit hot but once we opened a couple of Windows it was ok. The bed was a double and for us was a little small as we have a Superking size but it was comfortable enough. There are plenty of good walks and the nearby pub is very small but welcoming with a good choice of food and drinks. The fields surrounding the cottage has sheep and pheasants in them so dogs have to be on a lead. All in all a nice place.
Albatrossfloss
2018-11-25

Beautiful Setting, Clean and Tidy, Buttermere and Loweswater cottages
Stopped at Loweswater and Buttermere Cottages in this development in May 2018. Both cottages were immaculately clean and pretty much as shown on webpages. The stone built building oozes character and the surrounding views are stunning which is the biggest bonus of these cottages. The grassed area is fenced off making it safe for children and dog friendly (as they can't get at the sheep!). A very short walk takes you to the lakes edge. Picnic tables are provided. Two dogs are allowed in each cottage. The cottages themselves are nice enough but whilst they are very tidy and exceptionally clean they could do with a few little touches which would take them from tidy to fabulous. That said, these were minor issues (sofa was broken in one cottage and other cottage had a very old fashioned floral sofa which is not as seen in the website photo!) The bathrooms are probably overdue a bit of modernisation as they looked slightly tired, (think it was probably last fully refurbished in the early 1990's judging from the shower cubical and taps!) However, it did have heated modern towel rails and was spacious enough with walk in showers. Curtain rails were broken in one cottage and the entrance could benefit from a bit of TLC, (dead ivy on frontage and a very faded out of date 'map' on the wall!) Some of the paintings on the walls inside looked like they'd been hanging there about 30 years! However, these were really all pretty minor things. Just a shame as a bit of attention to these simple things would make a nice cottage a fabulous one! We didn't want for any utensil absolutely everything was provided from the selection of glasses (including champagne, pints and wine glasses) and cooking pots, pans, plates, even a teapot. Bed linen was crisp and clean and towels white and fresh and plenty of them. They were also warm with plenty of hot water. Our fridge did not have a freezer section which was slightly problematic given that we needed to keep a cool bag frozen for carrying insulin. However, Buttermere cottage did have a fridge with freezer compartment, bear in mind if you need ice! One warning would be that there was unavoidable noise from the cottage apartment above. The residents were not inconsiderate, it was just that the floor above seemed to maximise every little noise (we could hear their dog trotting across the floor at 5am and toilet flushing!) So I would say, bear in mind if you book the ground floor cottages there could be noise. Near Sawrey has a fab pub the Tower Bank Arms, which was about 5 minute stroll and it served great food and wine/ales. There is also the Sawrey House Hotel in strolling distance which was very beautiful setting. The Cuckoo's Brow Inn was also really great, but a little further away (15 minute stroll) in far sawrey. Both pubs must have reservations in advance. You can also walk to Hawkeshead on the new footpath, but bear in mind that sections of this route do not have a path and are on a very busy country lane, which isn't suitable for pushchairs and felt a little dangerous. You can drive to Hawkeshead though in about 7 minutes. You can also walk to the Ferry for Bowness and Windermere (but it is a rather longer walk of about 35-40 minutes) All in all, I would sum up that If you're looking for a character cottage with contemporary modern interiors (which are so available now a days) then I'd say avoid these as they are a little dated. However, If you are less worried about style they are very serviceable and we had no regrets staying here. We think it was good value at around ?35 pppn for the week). Would I recommend. Yes and no.... yes because of the location and value. Would we book again....probably not, there is so much luxury choice now at affordable prices I think I'd look for somewhere next time that has paid more attention to the little details.
JudyPen
2018-05-24

Get an Ordnance Survey map covering the Sawrey area.