Self Catering in Cumbria - Aldingham 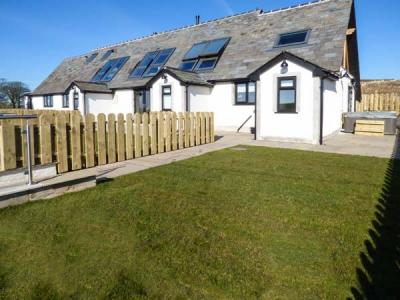 This superb end-terrace cottage is one of a group of four, situated near the village of Baycliff, six miles from Ulverston on the Furness Peninsula in Cumbria and can sleep two people in one bedroom.

Daisy Cottage is situated close to the village of Baycliff, six miles from Ulverston in Cumbria and can sleep two people in one king-size double bedroom with a freestanding bath and en-suite wet room. The rest of the cottage contains an open plan living area with kitchen, dining room and sitting room. Outside there is off road parking for two cars and a private patio area with hot tub.

Located close to the Lake District National Park, Daisy Cottage would suit a couple looking to explore this wonderful area and all it has to offer.

No key code
The cottage itself was lovely , apart from a few minor issues , jets on 1 side of hottub didn't work , the oven door came off in my hand when I opened it ( managed to fix )and the nearest pub was 2:5 miles not a mile as written in your listing , but what absolutely ruined my 2 night stay was not being able to get the key code , I text the number given the day before as instructed to get the code for the key safe no reply so I sent an email , no reply , the day of check in I was starting to panic rang sykes cottages to be put on hold forever then told they would ring us back , check in was 3pm it was 4:30 before we got the code , I then had a 2 hour drive as I couldn't set off not knowing if I couldn't get In . Arrived at approx 6:30 and guess what I COULDN'T GET IN !!!!by this point I was fuming ,stood in the rain trying numbers that you get no response from again , finally get through to be told I'd been given the wrong key code , my first night was ruined I was stressed and angry ?350 for the terrible experience, I think at the very least I should be reimbursed for that night !!! Avoid at all costs unless this situation is resolved .
mylosmum290
2019-08-25

Lovely cottage - DO NOT book in summer months
First thing is first, the cottage and area itself are absolutely beautiful. There are no faults to the area and holiday. BUT expect no sleep at night, unbearable inside temperatures and a constant sweat. We arrived to an extremely hot cottage with the heating on, turning this off we thought the issue would be resolved. As you can see, the temperatures kept rising with no form of air conditioning in the cottage. We had to set out and buy our own fan - which still is no use! We messaged the owner only to receive a response hours later telling us to just open the doors and windows. We had already done this but with a hot summer day what difference does that make. This also led to lots of bugs and lots of bites! Absolutely amazing cottage and holiday but completely ruined by the heat. We weren?t able to stay upstairs in the bedroom at all, so the living room was our limited area. It was so hot my make-up melted from sitting in the room!
L T
2018-06-27

A huge disappointment!
Stayed at the end of March and only reviewing now as had hoped our concerns would be resolved. The cottage itself is lovely, with beautiful decor and views. Only a short car journey to Ulverston and plenty of fantastic places to visit locally. We had a wonderful week travelling to different areas of the Lakes and the cottage proved a perfect base to relax in after the busy days, despite a few minor issues. These issues however have ended up causing huge frustration due to the extremely poor way that they were handled by the contact Gillian. On arrival we were greeted by a note, which stated that the wall mounted TV in the bedroom would be remounted the following day due to it being broken. This was never fixed during our stay. A sign of things to come. Cold showers and an overheating hot tub were next. When we phoned about the warning lights on the tub, we were advised us to 'take the lid off and pour some cold water into it,' which would have no effect seen as boiling water was being constantly pumped into it. All of these issues could have been overlooked, had we not had a final mishap to top off the week. On the final night, we used the washing machine. The cycle became 'stuck' and despite many attempts, did not finish when left overnight. The door was jammed and the clothes trapped. We had to set off back home and unfortunately was unable to make contact until we left. We were assured us that she would deal with it personally, and was going to dry the items and post them to us. Here we are nearly two months after returning and many exasperating messages later. We have been told many tales; the cleaner would sort them, the office manager had dealt with it, and finally that they have been posted to us. When asked to confirm to what address our clothes have been sent our messages have been ignored. We feel completely disappointed to have our memories of a lovely week ruined by such poor management, and would not recommend a stay here.
SunnyDays835
2018-05-15

Cottage beautiful but lack of customer care from owners
There has obviously been a great deal of attention put into the creation of this cottage -it's beautiful and the hot tub was superb BUT.... 13 out of the last 20 reviews since October 2016 mention broken blinds - these are still not fitted correctly -allowing light to stream in from sunset - on a couple of occasions we were woken at 5am by the light. No information on how to work the heating Pub is over 1 1/2 miles away down a very busy main road with no footpath Steps up to the cottage don't have the same height so very easy to trip up The cottage is situated on the main coast road to Barrow - garden is at the front -nearest the road - this isn't clear from the photos We experienced a lack of personal care from the owners - initial text response and message in the visitor book states "if you have any problems please contact us " we contacted the owner on arrival (Friday) to say we had only been left 1 bath towel. My husband sent a reminder text a few hours later - no response - woman arrived on Monday afternoon asking if we had enough towels? She eventually gave us another one - a response from the owner saying it would be sorted would have been appreciated - having read the visitors book - communication seems to be an issue. Very little information left by owners on cottage facilities( Finally found the cushions for outside chairs after been in the cottage for 6 days) Taxi companies in information folder won't pick up from the cottage Information leaflets out of date. Overall the accomadation was lovely but marred by the lack of customer care by the owners
Kt21t
2017-06-06

Amazing
We spent our honeymoon here. 3 evenings in the cottage, 1 we went out for a posh meal. We explored the area for the rest of the time, bought potatoes from the nearby farm to cook which were lovely. Nice evening walk through the fields at the front and down to the beach. Such a nice break.
missmoyle
2016-12-29

Details
Underfloor heating with electric fire
Electric oven and hob, microwave, fridge, mini freezer, washer/dryer, dishwasher, 2 x TVs with Freeview, DVD, WiFi
Fuel and power inc in rent
Bed linen and towels inc in rent
Travel cot and highchair on request
Off road parking for 2 cars
Patio area with hot tub
Sorry, no pets and no smoking
Shop 6 miles
Note: There are 11 steps leading from the car park to the cottage
Note: There is a public footpath directly opposite leading to the sea/beach

Get an Ordnance Survey map covering the Aldingham area.