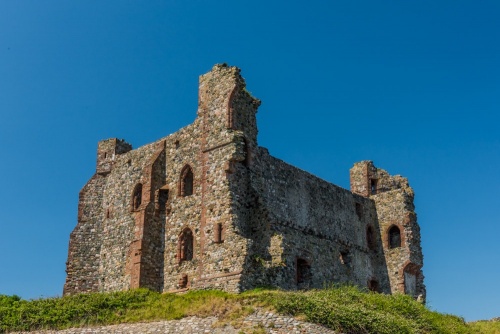 Piel Castle is a ruined 14th-century fortress standing on an island at the entrance to Barrow-in-Furness harbour and easily visible across Morecambe Bay. The castle is composed of a very imposing stone keep, with inner and outer baileys and extensive curtain walls surrounded by two ditches.

The castle was built in 1327 by John Cockerham, the powerful Abbot of Furness Abbey, as a measure to guard Furness against attack by Scottish raiders or pirates. The castle also served to keep a close eye on ships passing through Piel Harbour to the Abbey's extensive holdings in Ireland and the Isle of Man.

The Abbot based his castle on the remains of an earlier simple fort established during the reign of King Stephen (1135-1154). 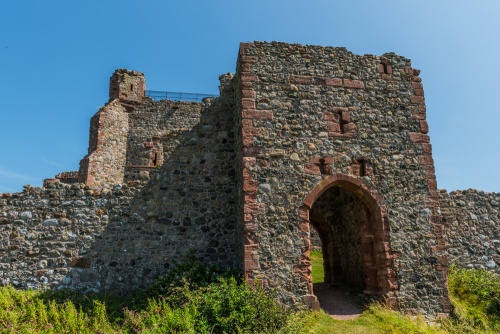 When Furness Abbey was suppressed by Henry VIII in 1537 the castle passed to the Crown, but Henry and his heirs did nothing to repair the crumbling fortress.

It was later used as a fortified warehouse for storing grain and wool. In the 18th century, a pub and pilot houses were built at the southern end of the island. Then in 1920, the Duke of Buccleuch gave the entire island to the people of Barrow-in-Furness as a memorial to the dead of WWI.

The most important moment in the long history of Piel Castle came in 1487 when 10-year-old Lambert Simnel came ashore on the island with a force of 8,000 mercenaries to launch his bid to overthrow Henry VII and seize the throne of England. Simnel claimed, falsely, to be the Earl of Warwick and thus the rightful king.

His short-lived rebellion was crushed by Henry at the Battle of Stoke Field near Newark. Henry recognised that Simnel had merely been a pawn in the schemes of plotting nobles so he pardoned the boy, who subsequently worked in the royal kitchens. 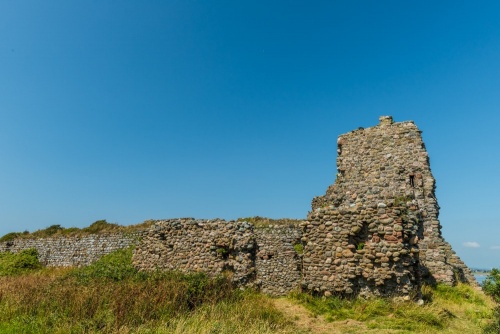 The curtain wall and chapel ruins

As mentioned, the castle remains consist of a curtain wall with corner towers, inner and outer baileys with ditches, and a three-storey central keep. The keep boasts a two-storey gatehouse, with stairs to the entrance at first-floor level. Over the entrance is a grotesque carved figure thought to represent Salome.

You can look into the keep interior and see that it is internally divided into three equal sections by a pair of parallel spine walls. The ground floor of the keep was probably used for storage while the upper floors housed living quarters and administrative chambers. In the south-east corner is a tower that may have held private apartments. 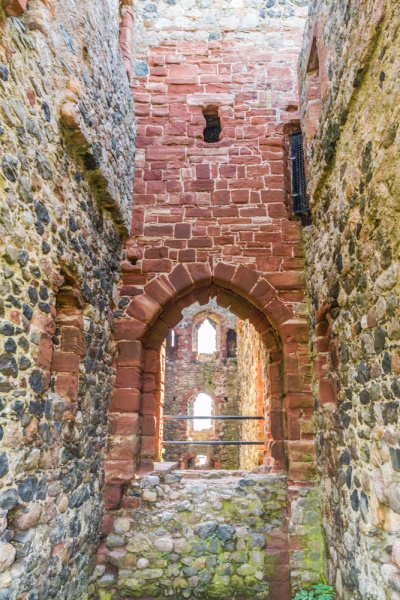 Looking into the keep

In the north-east corner of the outer bailey is a ruined tower that may have been part of the outer gate, now vanished. Below the tower is a roofless building thought to have been a chapel.

The castle remains are generally in good condition, but the easternmost part of the site has fallen into the sea due to the effects of erosion. You can scramble down to the shore for excellent views of the keep and ruined towers.

A curious tradition persists on Piel Island. If you ask for the honour, the landlord of the Ship Inn can proclaim you a 'Knight of Piel Island'. 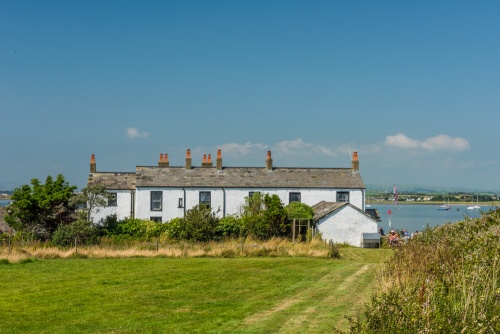 Unless you have your own boat the only way to reach Piel Castle is by passenger ferry from Roa Island. Ferries leave from the small pier beside the RNLI station at the end of the road.

Be aware that the ferry only operates seasonally and will not run if the wind and waves make the crossing unsafe. We found this out the hard way as we arrived at the pier only to find that services had been cancelled due to gusting wind. 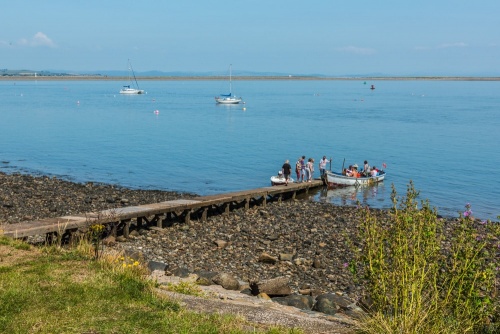 There is free parking in the Roa Island Boat Club parking area, which is clearly signposted as you enter Roa Island.

On a sunny summer day, Piel Island is a popular family destination. Many people take picnics to the island and relax on the shore or on the wide lawn by the pub. As a result, there can be queues for the ferry. When we visited we were able to take the ferry to the island without waiting but we had to wait 1 hour to make the return journey as there was a very long lineup of people waiting to leave the island. The crossing takes about 10-12 minutes.

There is a very short walk from the ferry pier to the castle. The castle itself will not take long to explore - primarily because you can't go inside the keep due to safety concerns. That said, the remains are extremely impressive, with the keep still standing to a great height, and large sections of the curtain wall intact.

There are several corner towers and a large gatehouse. You can also see where large sections of the curtain wall have collapsed onto the rocky shore below as the cliffs have eroded. Thankfully, English Heritage has stabilised the cliffs so that the castle keep should not be in any danger of collapse. 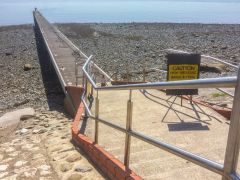 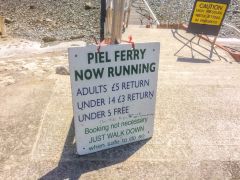 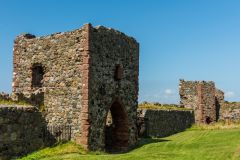 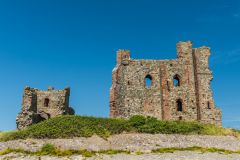 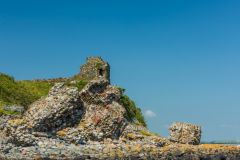 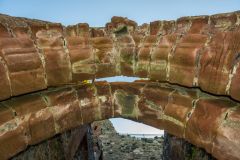 More self catering near Piel Castle >>