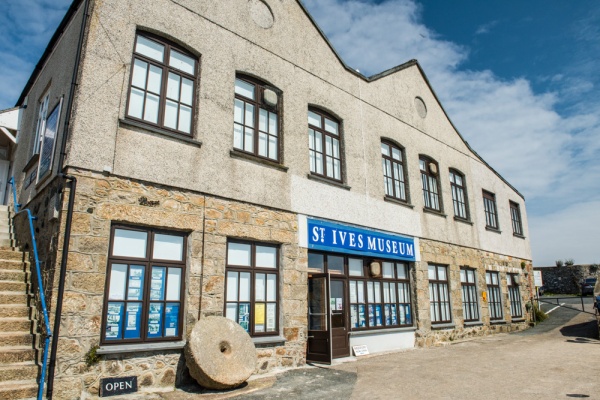 The museum is housed in a building that was once used to cure pilchards, and was later used as a laundry, a cinema, and as home to the British Sailors Society Mission. The ground floor formerly housed the famous Troika Pottery, but since 1968 the building has been home to the St Ives Museum.

The museum covers the heritage of St Ives in detail, looking at mining, lifeboats, fishing, geology, farming, wrecks, and much, much more. See a display of Victorian clothing, and a recreation of a traditional Cornish kitchen. From toys to boatbuilding, painting to blacksmithing, every aspect of life in St Ives comes alive.

There are exhibits on several famous companies that were based in St Ives, including the Hain Steamship Company and the artists collective known as Crysede. Learn about John Knill (1733 – 1811), the eccentric Mayor and Collector of Customs of St Ives who built his own memorial atop Worvas Hill, overlooking the town. Knill left money to pay for a dinner every five years, and stipulated that ten young girls dressed in white should walk in procession from the market house to his monument, where the whole company should sing the 100th psalm.

The museum boasts a huge collection of historical photographs, and hosts an audio-visual studio where you can watch films on the local area.

See how this ground floor of the museum was once used to cure pilchards. Exhibits show several different methods used in the curing process.

The museum is open seasonally and there is a small entrance fee. It is located just south of The Island and north of St Ives fishing harbour, about 75m from Smeaton's Pier. It is well signposted from the harbour area.