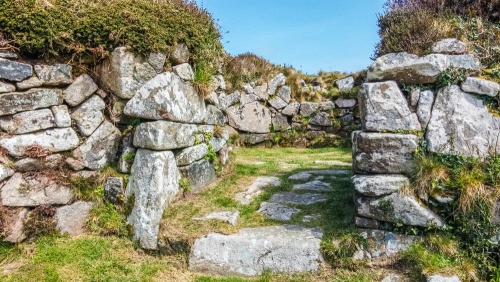 Chysauster was an Iron Age village inhabited from about 100 BC to sometime in the 3rd century AD. It was probably built by members of the Dumnonii tribe of Cornish Britons. The village is composed of ten courtyard houses, laid out in two rows with a central space between, like a village street. This elongated street arrangement of dwellings was necessary because the houses were built in an area that had been terraced for the cultivation of crops at least a century earlier.

Outside the main grouping of houses is another stone house, and there are the remains of several outlying buildings in the surrounding fields.

At its peak it was home to at least 10 families, suggesting a population of between 50 and 70 people. Different types of pottery have been found in different houses, suggesting that not all the houses were in use at any given time. Houses 5 and 9 were abandoned in the late 2nd century AD, but House 7 was clearly in use for another 100 years after that.

Six houses were excavated over the period 1873-1939, and other remains of unexcavated houses can be seen as nearby earthworks. Many stone tools were found during excavations, including polished stones for smoothing leather, quern stones, and whetstones for sharpening metal tools. Archaeologists also found fragments of two Romano-British pottery bowls used for serving and eating food. The bowls have been reconstructed and are on display at the Royal Cornwall Museum in Truro. 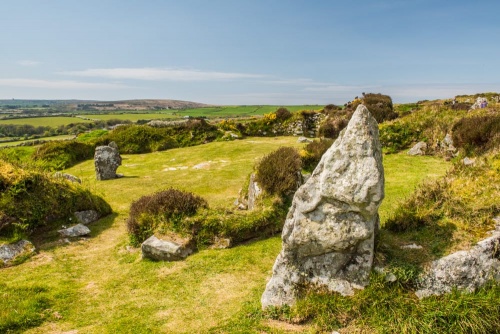 Each of the main houses is similar in layout. The building is oriented on an east-west axis, which the entrance in the east, probably situated to protect inhabitants from the prevailing wind. The east-west diameter is approximately 90 feet. A passage leads from the entrance to an inner courtyard of about 25 feet in diameter.

Things to look for inside the houses include stone-lined drains for collecting and channelling water. You can also see odd socketed stones possibly used for upright timber posts supporting the roof. You can also see box-shaped depressions framed by stone slabs, probably used as open hearths.

On the far side of the courtyard is a small circular room with chambers radiating out from it. One narrow, elongated room may have been used to keep livestock. Off the circular main room is a curved bay, probably used to shelter cattle, sheep, or pigs. The central courtyard was open and used for activities like caring for animals and grinding grain.

Rooms for storage and living were built into the walls, which are as thick as 14 feet in places. Outside each house is a banked area probably used for cultivating vegetables. Many spindle whorls were found during excavations, suggesting that making wool was an important activity.

This layout around a central courtyard is found only in western Cornwall and the Isles of Scilly during the Iron Age and Romano-British Britain.

Chysauster means 'House of Sylvester' and is pronounced with the emphasis on the second syllable; 'che-zoi-ster'.

Residents of Chysauster would have spoken an early Celtic language, a forerunner of Cornish. Cornish survived here in West Penwith longer than any other area.

Here are some of the highlights at Chysauster: 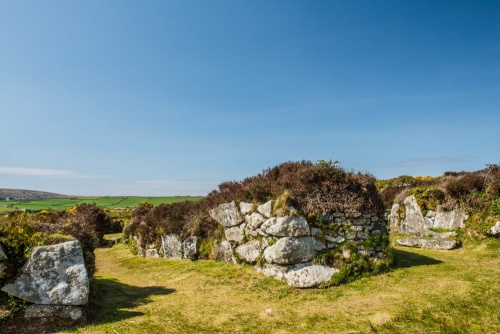 The 'semi-detached' entrances of House 3

The largest and best-preserved house at Chysauster, first excavated in 1873 by the famous Cornish antiquarian William Copeland Borlase, who discovered cooking stones, ashes, and pottery within the walls.

In the spirit of the time, he also tried to rebuild several of the interior walls but made rather a bad job of it. One of the finds in House 6 was a delicate little glass bead, discovered in the round room.

In 1937 Charles Croft Andrew restored and re-excavated the house, discovering the narrow rear entrance to the large round chamber. He carefully dismantled Borlase's interior walls and reinstalled the original wall structure.

First excavated in 1931, this house produced a staggering 1,322 archaeological finds, far more than any other house on the site. It is possible that this house was abandoned and later adapted as a rubbish dump by residents of the other houses. There are two entrances, two original and a modern one at the bottom of the slope. A drain runs across the house, bringing water to a large stone reservoir, or cistern.

In the 19th century House 7 was altered to make space for outdoor preaching by Methodist ministers. Internal walls were removed and a platform erected. Travelling Methodist preachers were barred from preaching at Church of England parish churches, so they held outdoor gatherings that often attracted huge crowds. These outdoor meetings were particularly popular in Cornwall. In the 19th century, they were so common that Chysauster was known locally as 'The Chapels'.

An Iron Age 'semi', there are two distinct semi-detached courtyard houses. One was built first, then later extended to incorporate the second house. Within the house is a strange stone structure that may have been a forge for metal-working. A lump of granite used for weighing metal was found in House 3, suggesting that the villagers were smelting and trading tin. 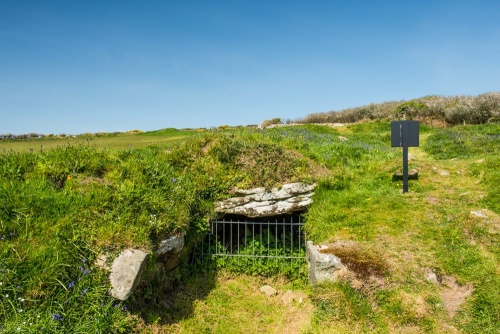 Near the site entrance is a collapsed fougou, or underground tunnel. The word fogou comes from the Cornish word for a cave. Fogous are stone-lined tunnels, sometimes terminating in a chamber. No one knows exactly what they were used for but the most likely purpose was as an underground storage area to keep perishable foods. They may also have been used to store valuables.

Another theory is that they were places of refuge in times of trouble, but they may also have had a ceremonial purpose. There are 15 confirmed fogous in Cornwall and another 10 possible sites. Fogous are similar to the souterrains found in Scotland. One of the best-preserved fougous is at Halliggye, on the Trelowarren estate near Helston, also protected by English Heritage.

The fogou tunnel is collapsed and has not been excavated. An iron grill covers the entrance but you can peer inside easily enough and make out the passage walls.

The inhabitants of Chysauster survived by farming and livestock raising. Evidence of field enclosures show where the herds were prevented from getting at food crops.

Around the site are stone boundary walls dating back to prehistoric times. Many are as much as 2 metres wide.

Chysauster is well signposted from surrounding roads. It can be reached on a minor road off the B3311 between Penzance and St Ives. There is a free car park on the south side of the road, with a toilet. A path leads from the north side of the road opposite, up hill past two fields, to the Chysauster site. 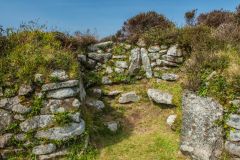 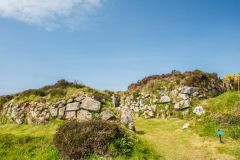 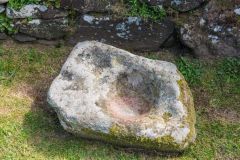 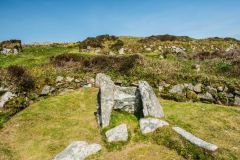 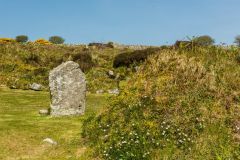 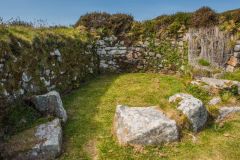 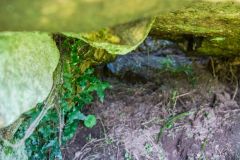 More self catering near Chysauster

More bed and breakfasts near Chysauster