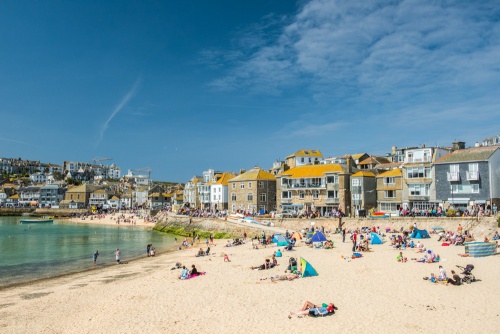 St Ives successfully brings together multiple traditions as a fishing port, seaside resort, and artist colony. The area is blessed with superb coastal scenery and sandy beaches which draw the "spade and bucket brigade" by the thousands. Also drawn, this time by the mild climate and wonderful Cornish light, are artists of every description.

St. Ives has a proud history as a centre of art, particularly avant-garde and abstract art, a fact recognised by the establishment here of the Tate St. Ives, a branch of the Tate Gallery of London. Nearby is the studio where sculptress Barbara Hepworth worked, and a sculpture garden of her own design is open to visitors.

The sea at St Ives is a startling sight to first-time visitors; it is gloriously clear, almost tropical; you would be forgiven for thinking you had been magically transported to a lagoon in the South Pacific.

The whole of West Cornwall is blessed with excellent sandy beaches, and St Ives is no exception. Porthmeor is good for surfing at most times, but for quieter relaxation, St Ives harbour itself offers a clean stretch of golden sand. Other well-visited beaches are at Porthminster, Carbis Bay, and Porthkidney. 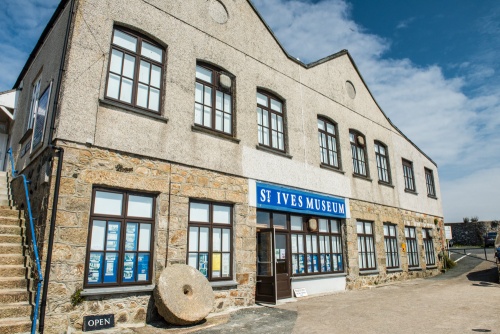 For centuries life at St Ives revolved around the harbour, and most natives were involved in fishing. The old part of the town, near the harbour, is a maze of winding, narrow streets and cobbled alleys, but everywhere you turn you will see the flowers which have garnered St Ives several international awards and numerous "Britain in Bloom" honours. Public gardens and parks showcase blooms of every description and make St Ives come alive with colour at almost any time of year.

St Ives developed as a fishing port in the 14th century and was important enough to be granted a weekly market in the 15th century. It was raised to the status of a borough in 1500. The town developed around The Island, a promontory dividing the windswept Porthmeor area to the north-west from the protected Porthminster area to the east and south.

Throughout St Ives you will see many works of art by Barbara Hepworth, donated by the sculptress to her adopted town. Hepworth's studio has been transformed into a gallery space and exhibition on her life and career, surrounded by a beautiful sculpture garden laid out by Hepworth herself.

For contemporary artists, visit Back Road West, otherwise known as "Downalong", where artist's studios line the road. At Norway Square, the St Ives School of Painting holds outdoor lessons in the summer, and there are regular exhibitions of art.

You can see some of the best examples of local art, with a focus on sculpture, at the popular Tate St Ives, a satellite gallery of the Tate Britain and Tate Modern in London. There is a joint ticket available for the Tate and the Hepworth Sculpture Garden, which will definitely save you some money. 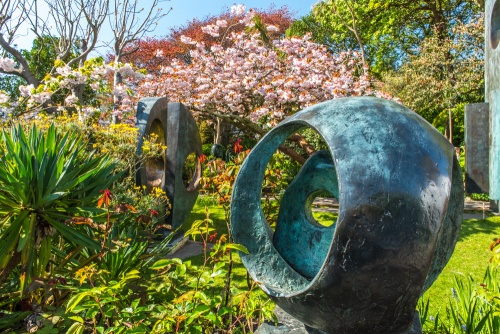 Aside from the Tate and Hepworth galleries popular attractions to visit include the St Ives Museum, near the harbour, where you can explore the early history of the area, and Smeaton's Pier, built in 1770. At the beginning of the pier is St Leonard's Chapel, where fishermen would pause to pray before setting out to sea. They paid the chapel friar in fish!

Also popular with local sailors was St Nicholas' Chapel, on The Island, used by fishermen since the 16th century, but also used by "preventive men" to keep a close watch out for smugglers.

The oldest church in St Ives is the parish church of St Ia, which was begun in 1434 and boasts one of the tallest towers in Cornwall. The church bears an unusual dedication to a trio of saints; Andrew, Peter, and Ia. The latter was an Irish priestess who is said to have converted the area to Christianity in the 5th century. She reputedly embarked upon her mission by crossing the Irish Sea in a leaf! 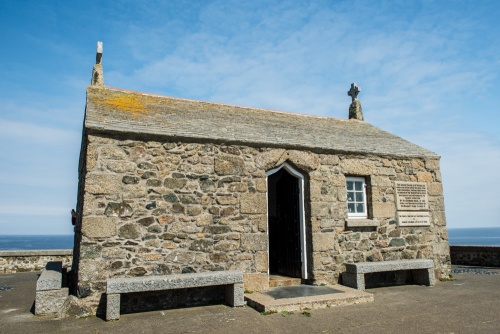 Across from St Ia's church is Market House, built in 1832 on the site of the late medieval Guildhall. The Mayor and Corporation of St Ives met in the Guildhall chambers over a ground-level market place. It was from the Market House that John Payne, Portrieve of the town, led the men of St Ives to join the Prayer Book Rebellion of 1549. When the Rebellion was quashed Payne was executed in the nearby Market Place.

In 1729 the Market House was the scene of a bloody skirmish when starving miners of Redruth marched on St Ives to seize corn. Residents of St Ives took up a position near the churchyard and managed to repel the miners.

During the 19th century, courts were held on the upper floor of the Market House and prisoners held in two cells, and you can still see the hatches through which food was passed through the floor to the unfortunate prisoners.

Across from Market House stands a striking war memorial in the form of a huge Celtic cross, and behind it is a peaceful Garden of Remembrance.

On The Island, near St Nicholas Chapel, is The Gun Battery, built in 1859 to counter the threat of a French invasion. Three gun emplacements were built, with ammunition stored in an underground magazine. The battery was dismantled in 1895 and later replaced with a signalling station and coastguard watch.

One unusual visitor attraction is Barnoon Cemetery, the oldest burial ground in St Ives. The cemetery is located immediately west of Tate St Ives, on a sloping hillside that offers superb views over Porthmeor beach across to St Nicholas' Chapel. In the cemetery are the graves of two men who lost their lives in the wreck of the Titanic in 1912, and local men who drowned while serving aboard the St Ives lifeboat.

You can find information about what to see and do in the tourist information centre, housed in the old town Guildhall. As we were exiting the Guildhall, our hands full of brochures for local attractions, I spotted an art gallery across the street, advertising itself as 'the worst gallery in St Ives', a claim verified by reviews on TripAdvisor.

There is a useful park and ride scheme, which might be advisable because parking is at a premium in St Ives. There is a very large (1000 places) car park at the top of the hill leading into town, and another at The Island, but don't even think about finding a free parking space on any side streets near the harbour. Our family use the Park Street car park but it is fairly small and you won't be guaranteed to find a spot. 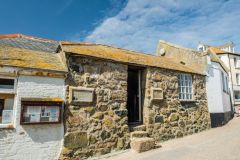 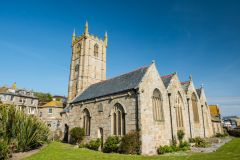 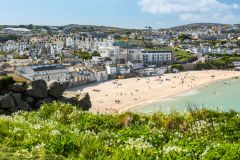 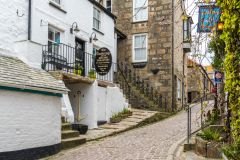 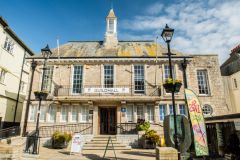 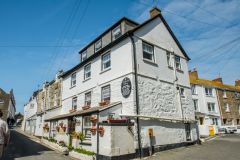 More self catering near St Ives