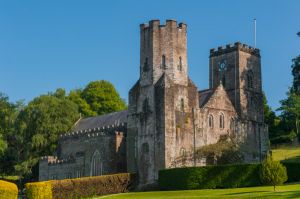 Now here's a church with a history! The parish church of St Germans is dedicated to St Germanus of Auxerre (AD 380-448), and the first church on the site is thought to have been founded following a visit by St Germanus here around the year AD 430. The saint also founded a religious settlement that eventually became an Augustinian priory.

The first church consisted of a nave, chancel, and two small aisles, built as lean-tos onto the nave. Only the nave remains of the original building. Further additions to the building took place in the 14th and 15th centuries, including the present Lady Chapel, which was built in 1358.

Within the Lady Chapel was a casket said to hold the wrist bone of St Germanus, which became a draw for pilgrims in the medieval period. In the south wall is a small door thought to be used by pilgrims coming to view the shrine of St Germanus. 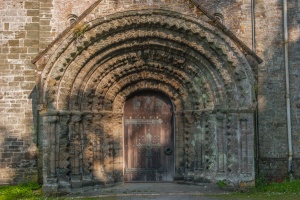 The Augustinian priory founded by St Germanus continued until it was dissolved by Henry VIII in 1538. The king granted the abbey to Robert Champernowne, who owned it until 1571, at which point it passed to the Elliot family and was transformed into the historic house of Port Elliot.

In 1592 the chancel of the Norman church collapsed, and the stonework of the east window was gathered up and re-erected at the east end of the nave.

The first thing you notice about the church is its sheer size. It is huge and sports two west towers. The north tower is somewhat peculiar; it turns into an octagon as it rises. The south tower boasts a Norman external stair, the only one in Cornwall. 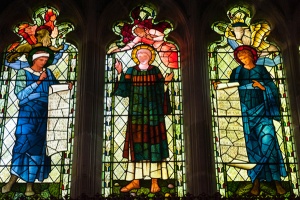 The East window by Burne-Jones

Between the towers is the very large Norman west door, built of local stone. The door is immense, with no fewer than seven orders of arches, and is decorated in traditional Norman zigzag pattern carving. It is almost suitable for a medieval cathedral and must stand as one of the most impressive Norman doors in the country; easily the equal of many larger cathedrals.

The church guide says with pride that the west front 'has few equals in England', and I'd have to say I agree; it is truly awe-inspiring, but what is really impressive is that there has never been any rebuilding on the west front; every stone is original and still where it was placed by the Norman masons over 800 years ago.

The interior has more Norman features than any other church in Cornwall. The south clerestory windows (now blocked up) are Norman, decorated in zigzag patterns. The great east window was designed by Edward Burne-Jones and executed by William Morris. On the north wall is a memorial to John Glanville (1599-1631), a curate of St Germans.

The font is a gorgeous 13th-century creation in Purbeck marble, with low relief carving that must have been added at a later date. Sometime in the 19th century, the font was broken up and cast out of the church. In 1840 the vicar of the day, one Rev Furneaux, gathered up the scattered pieces and reassembled the font like a giant jigsaw puzzle. 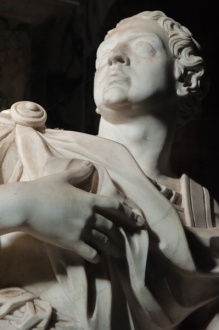 Other historic features include a 14th-century choirstall with a misericord depicting a man being punished for hunting on the Sabbath. There are also several interesting monuments, including one to the first Earl of St Germans, who died in 1823.

Much earlier is the black marble tomb of John Moyle (d. 1661) and a magnificent monument by JM Rysbrack for Edward Eliot (d. 1722), showing the deceased in Roman costume.

Rysbrack was a Flemish sculptor who came to London in 1720, quickly building a reputation among members of high society, particularly for his stylish funerary monuments. Among the monuments he created was that of Isaac Newton in Westminster Cathedral.

Under the east window is a reredos given by the Dowager Countess of St Germans in 1920.

My first sight of St Germans church, standing on the slope of a hill above the historic house of Port Elliot, was accompanied by a gasp of appreciation. The sheer scale of the church, approached from the west, is staggering.

The west front, with its Norman door, is one of the loveliest I have ever seen. The interior is interesting, rather than overwhelming, though I was very impressed with the Rysbrack monument for Edward Eliot and the Burne-Jones east window. 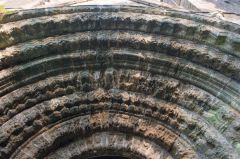 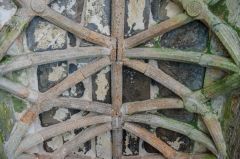