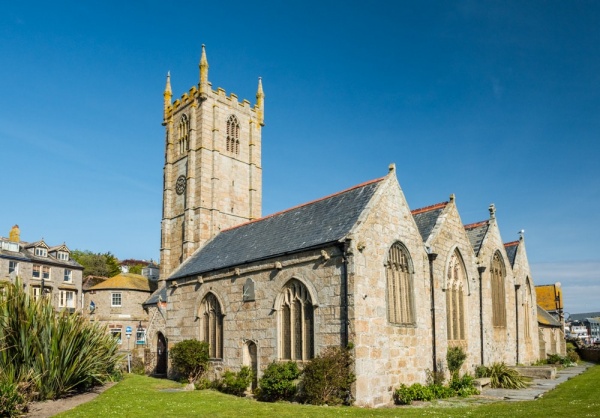 The parish church of St Ives is dedicated to a 5th-century Irish saint named Ia the Virgin, who is said to have been carried across the Irish Sea on a leaf. The church was built of granite between 1410 and 1434 and is one of the most beautiful churches in Cornwall.

It was built as a chapel of ease and only became the parish church in 1826.

The tower is one of the highest in Cornwall, standing over 80 feet tall and acting as a beacon from the town and sea. It is built of granite quarried near Zennor. A south aisle was added to the building by the Trenwith family around 1500. 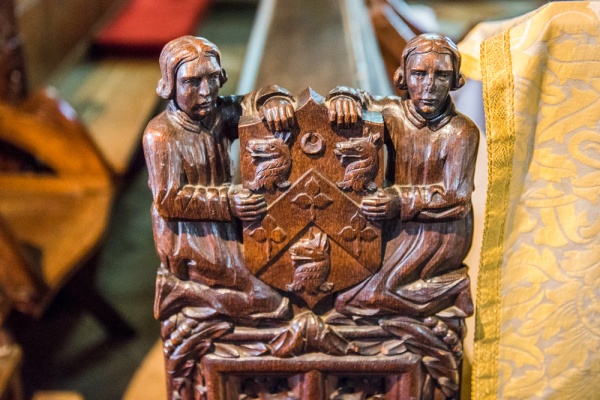 The choir stalls boast 15th-century carved panels that may have been part of the original medieval rood screen. One carving shows a man wearing a cocked hat, another shows a woman in a coif head covering. Nearby are blacksmith tools. all three carvings are said to be made by Ralph Clies, the village blacksmith at the time.

The wagon roof is simply stunning, with wonderfully carved bosses and decorative carvings in the shape of vines. The wall plate of the chancel and sanctuary is embellished with painted and gilded figures of angels. Two are Seraphim, carrying wreaths, while the others, five on each side, carry shields, scrolls, and books.

As you stand in the nave looking towards the chancel you can see that the slender stone piers lean outward at a striking angle. This may simply be due to subsidence over centuries but another theory suggests that it is intentional, built to represent the sloping sides of a boat.

The bench ends are 15th century, though many were restored in the 1940s. The font is probably late medieval, also of granite, and is carved with figures of angels carrying shields. 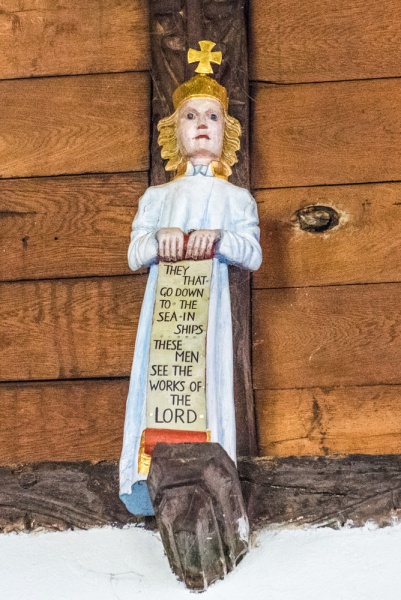 The oldest memorial is a brass to a member of the local Trenwith family who died in 1463.

Behind the high altar is a reredos made of alabaster, with a Crucifixion scene witnessed by a figure of St Ia. The organ dates to 1831.

The colourful east window was inserted in 1905 after the previous window glass was blown out when the dynamite works at Hayle suffered a massive explosion.

One of the highlights is a sculpture by the celebrated artist Barbara Hepworth in honour of her son Paul who died in 1953 while serving with the RAF. The sculpture is in the 16th-century Trenwith aisle, which now serves as a Lady Chapel.

Outside the tower is a tall 15th-century cross, possibly brought here from another church. The cross stands over 10 feet high and is set upon an octagonal shaft.

St Ia's Church is usually open daily to visitors and is free to enter. It is a beautiful medieval building and is well worth a visit. 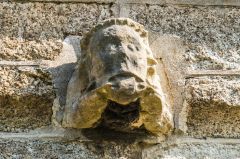 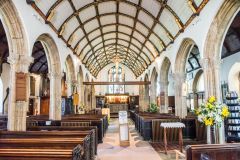 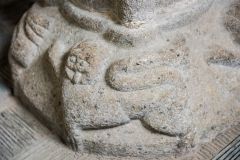 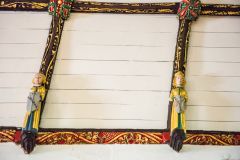