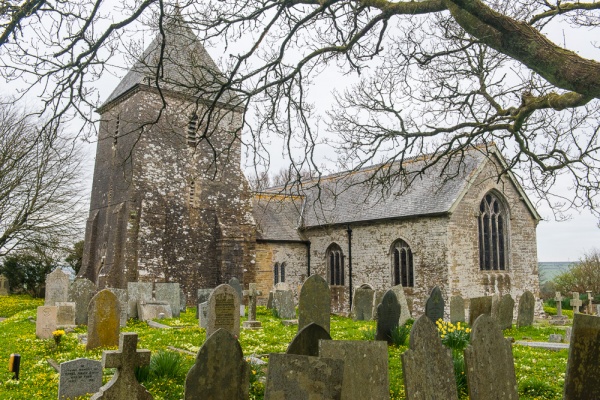 St Cybi, or Cuby, was a 6th-century missionary, said to be the son of a Cornish king. According to legend, Cuby was raised as a Christian, and as a young man he went on a pilgrimage to Rome and Jerusalem. On the journey, he felt that his calling was so strong that he entered the priesthood, and was anointed a bishop.

He returned to his native Cornwall only to find that his father had died and he was King of Cornwall. He refused the throne and instead set out on a missionary journey through Cornwall, preaching the Christian gospel and founding churches. He later took his mission to Wales, where he founded more churches.

One of the Cornish churches said to have been established by St Cuby is at Duloe, where the church now bears his name. St Cuby's church stands well south of the village centre, not far from the site of a holy well also dedicated to him. No one knows exactly how old the well is, but the stone basin is ancient, and could certainly have been used for baptisms.

The church itself is medieval, but it stands inside a raised curvilinear enclosure commonly used by early Christian 'lans', or holy enclosures. The 'lan', or 'llan' enclosure was used for burials, with a small chapel, or hermitage on one side. It is thought that such a chapel lies underneath the present church. 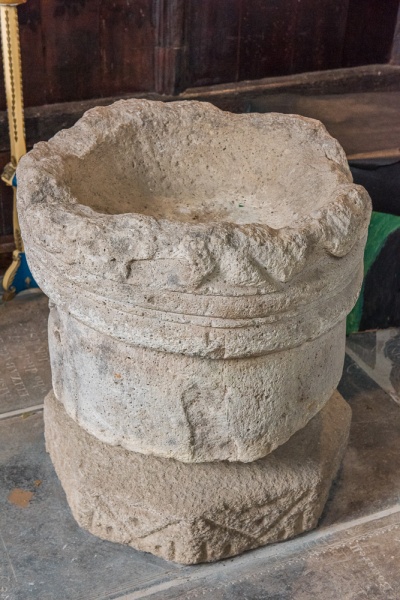 Within the church is a fascinating granite bowl, or basin, carved with figures of griffins and a dolphin. The basin is very worn, and I found it rather difficult to make out the carvings. The bowl stood for many years in the outer cell of the holy well.

Local legend said that anyone disturbing the basin would suffer ill-fortune. In 1822 a drunken workman rolled the basin down the hill. It didn't stop until it reached the garden of an old woman, who later claimed to have heard piskies laughing around it all night long. It was later taken by the squire of Trenant Park, and languished in the Park garden for many years until it was placed in the church for safekeeping in 1959.

Unusually for a Cornish church, the 13th-century tower is not at the west end of the nave, but rather is attached to the south transept. Much of the remaining structure was rebuilt in 1861. The top stage of the tower was removed during that restoration because it seemed to be leaning at a dangerous angle over the nave.

The south doorway and pilasters of the chancel windows are the only other parts of the church to date wholly to the 13th century. We know that the church was consecrated in 1321, but that is just one date in what was already a very ancient history of worship on this spot. 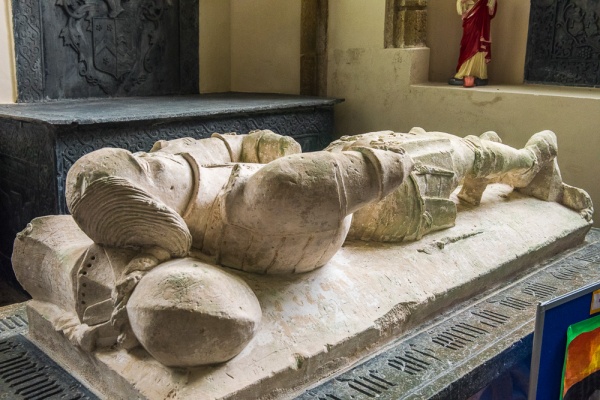 Within the chapel is the effigy of Sir John Coleshull (d. 1485), who established the chantry, with a bequest for priests to say daily masses for his soul. Sir John was said to be the second-richest man on Cornwall at the time of his death.

The arch between the chancel and chapel is beautifully carved, with foliage, crowned roses, angels, and family coats of arms. Look for the carving of a Green Man on the arch.

Thankfully the Colleshull chantry was spared the Victorian restoration efforts, headed by James Piers St Aubyn in 1860. The years have not been kind to St Aubyn's reputation, with future generations questioning his extreme, almost brutal rebuilding of churches that wiped away medieval features.

Like many other Victorian Gothic architects, St Aubyn seldom felt constrained to rebuild in the same style that he found. His generation was convinced that there was really only one 'true' medieval Gothic, and that was Early English style, roughly taking in the period from 1250-1350. For whatever reason, St Aubyn spared the Coleshull chantry chapel from his sweeping changes to the church.

The rood screen is 16th century, a century later than the parclose screen. Under the north window is the memorial of John Killiow of Westnorth Manor, who died in 1610, and his wife Dorothy Trevelyan (d. 1600). Above the tomb is a heraldic shield showing the arms of Killiow impaling Trevelyan. 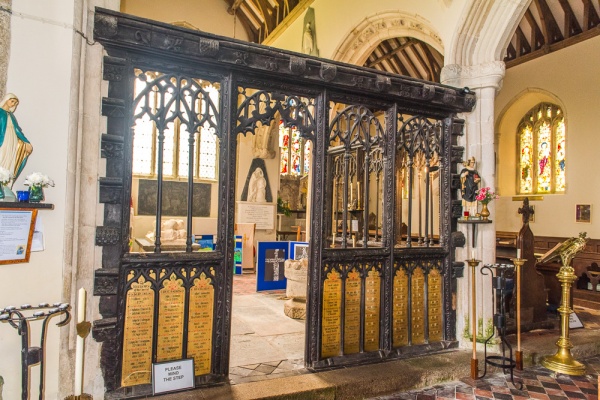 One of the delights of Duloe's church is several wonderful 16th-century memorials carved in extremely high relief. One of these is to Anna Coffyn, who died in 1592, and shows her holding a book and a pair of gloves. Her Elizabethan dress is beautifully detailed. Another relief memorial depicts Maria Arundel, (d. 1629), the daughter of Thomas Arundel and niece of Sir John Arundel. Look for the cryptic verse 'Man a dry laurel', which is an anagram of her name. Under the east chapel window are two more Elizabethan slate memorials.

Other monuments include that of Vice-Admiral Sir Edward Buller, Bart of Trenant Park 1764-1824, and to Henry Bewes (1793). In the south wall of the chancel is a colourful pair of 19th-century window in memory of Rev. P Bush and his wife. It was Bush who was responsible for the restoration of the church.

The oak seating in the chancel and Colleshull Chapel came here from Balliol College, Oxford.

The church is normally open daylight hours to visitors, and was open when we visited. Do take the time to visit St Cuby's holy well, just down the hill towards Sandplace. 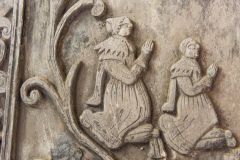 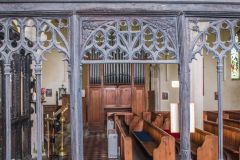