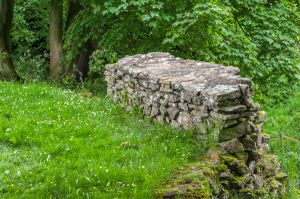 Extensive earthwork remains of a 1st-century Iron Age fort established by the Brigantes tribe. The site was not purely defensive but was used as a trading centre and administrative capital for the Brigantes. Excavations have found Brigantian and Samian pottery, as well as Iron Age weapons, and a skull.

The earthworks cover a huge area, enclosing 850 acres. The site was built in at least three phases, beginning in the mid 1st century. Around 50 AD the site was enlarged to take in 130 acres, with space for livestock to be kept within the earthworks.

Within a few decades, the site was enlarged once more, but that work was never finished, perhaps due to the Roman advance into Brigantian territory in 71 AD. The completed defences stretch four miles.

The Brigantes were the most powerful tribe in northern Britain during the early Roman period, and for a time they were strong enough to withstand Roman pressure from the south. After the final victory of the Romans, the Brigantes moved their tribal capital to Aldborough.

Within the earthworks of the camp stands the very nice redundant 13th-century church of St John's with a 9th-century Saxon cross shaft and other Saxon remains.

I found it quite difficult to find the path leading to the fort; it wasn't very well signposted from the surrounding roads and I drove back and forth for quite a while before I finally discovered the site at the eastern edge of Forcett hamlet. There is no parking area, and only a small signpost, half-hidden by the foliage that disguises the entrance. I do hope English Heritage can improve signage if they really want people to enjoy the site!

From the gated entrance to the site a trail leads through a heavily treed area, directly onto the top of the earthworks, though at first, you don't realize you've arrived at the fort! A walk of 5-10 minutes brings you to the remains of a stone-walled area; the best-preserved evidence of the defences. The walled section is quite small, and again, not well signed, so you really are left to your own devices to imagine how the site might have looked in its heyday.

I found the best way to really appreciate the fort was to clamber down into the ditch and walk along the bottom, with the earthwork banks rising on either side of me. It was then that it really sank in what an extraordinary achievement of time and energy it was to create the huge enclosure. 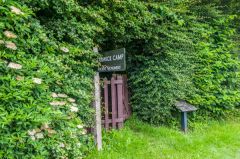 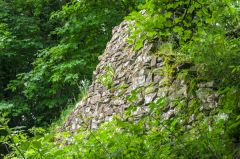 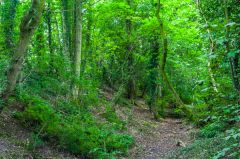 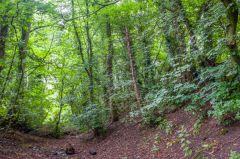